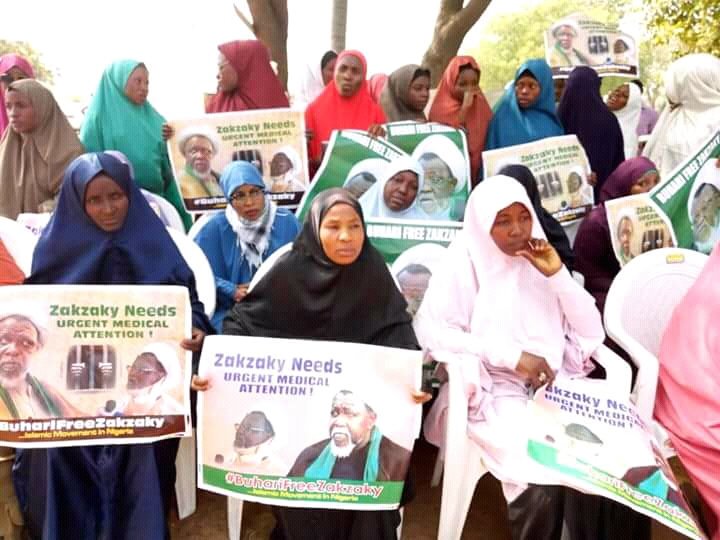 Update on last week events including protests and daily sit out in Abuja and Nigerian Govt’s attempts to legitimise unconstitutional detention of Sheikh Zakzaky.

We request campaigners to continue with last week’s action alert. IHRC has sent a letter to Nigerian High Commissioner in London and offered to host Sheikh Zakzaky for the medical treatment in UK. Other organisations in Malaysia, Indonesia and Turkey are sending similar letters to the Nigerian Embassy in their countries. We request all campaigning organisations to send similar letters and offer to host Sheikh Zakzaky for the medical treatment in your country. Individual campaigners please keep on praying for Sheikh and demand his immediate release. Two model letters are provided in action alert, one for the organisations and one for the individual campaigners.

ACTION ALERT FOR THE ORGANISATIONS: Demand immediate release and offer to host Sheikh Zakzaky in your country for medical treatment.
Campaigners / Organisations are requested to demand meeting with local Nigerian Embassy and offer to host Sheikh Zakzaky for urgent medical treatment in your country, using the model letter below.

Please adapt the model below and insert details in yellow highlighted areas depending on if you are writing as an individual or an organisation and who you are sending it to. Please forward any response you receive to IHRC on info@ihrc.org.

We are writing to you raise our concerns about the continued detention of Mu’allim Ibrahim Zakzaky, head of the Islamic Movement of Nigeria (IMN).

I am sure you are aware that Shaykh Zakzaky’s house was demolished and he was injured and arrested by the Nigerian military on 14 December 2015, and has been held since without any charges or a trial. Shaykh Zakzaky, whose health has rapidly deteriorated, is in need of special medical attention. Since his arrest, Shaykh Zakzaky has lost his sight in one eye and the use of one arm. Shaykh Zakzaky also suffered a stroke earlier this month which has further aggravated his dire condition.

The courts ordered Shaykh Zakzaky’s release and he should have been free since 15 January 2017, unfortunately the security services have continued to detain him contrary to court order.

Shaykh Zakzaky’s condition requires specialist medical attention and will need to go abroad to get the necessary treatment. We Name organization is happy to host Shaykh Zakzaky in Name Country and I/we will cover all the costs involved, including his travel, accommodation, medical expenses as well as any other expenses that may arise from the trip.

This matter has now dragged on for two years and has become a major blemish on Nigeria’s good name in the international arena. We urge you to use all your powers and influence to help bring about a swift and peaceful resolution.

We would like to request a meeting to discuss this matter further. Please provide a date and time you will be available to discuss how this matter can be resolved.

ACTION ALERT FOR INDIVIDUAL CAMPAIGNERS: Demand urgent medical treatment for Sheikh Zakzaky
Campaigners are asked to write to or email the Nigeria President and the Nigerian Ambassador or High Commissioner in your country, using the model letter below.

Model letter
Please adapt the model below depending on who you are sending it to. The addresses and salutations you need are presented below the model. Please forward any response you receive to IHRC on info@ihrc.org.

If you are emailing, please use the following in the subject line:
URGENT MEDICAL TREATMENT FOR SHEIKH ZAKZAKY
[Your name]
[Your address]
[Date]

Dear [insert name],
I write to demand that Sheikh Zakzaky and his wife Mallima Zeenah are allowed to leave the country for urgent medical treatment.
The continued detention of both of these figures as well as hundreds of others has been a huge stain on the reputation of your government and Nigeria. By not allowing Sheikh Zakzaky and Mallima Zeenah, whose health continues to severely deteriorate as a result of injuries inflicted by your authorities, the medical treatment he needs, you are adding further evidence of your government’s inhumanity and cruelty.
I look forward to your confirmation of their release for treatment by return.
Your sincerely,
[Your signature if posting]
[Your name]

#FreeZakzaky Daily Sit Out Continues in Abuja
27 January 2018
Today was 11th day of #FreeZakzaky daily Sit Out in Abuja, a big number of concerned Nigerians are regularly attending this “daily Sit Out” since 17th January 2018 in front of Unity Fountain, in Abuja. The Sit Out is organised by coalition of groups to highlight plight of Sheikh Zakzaky, leader of Islamic movement of Nigeria who is illegally detained by security forces since December 2015. 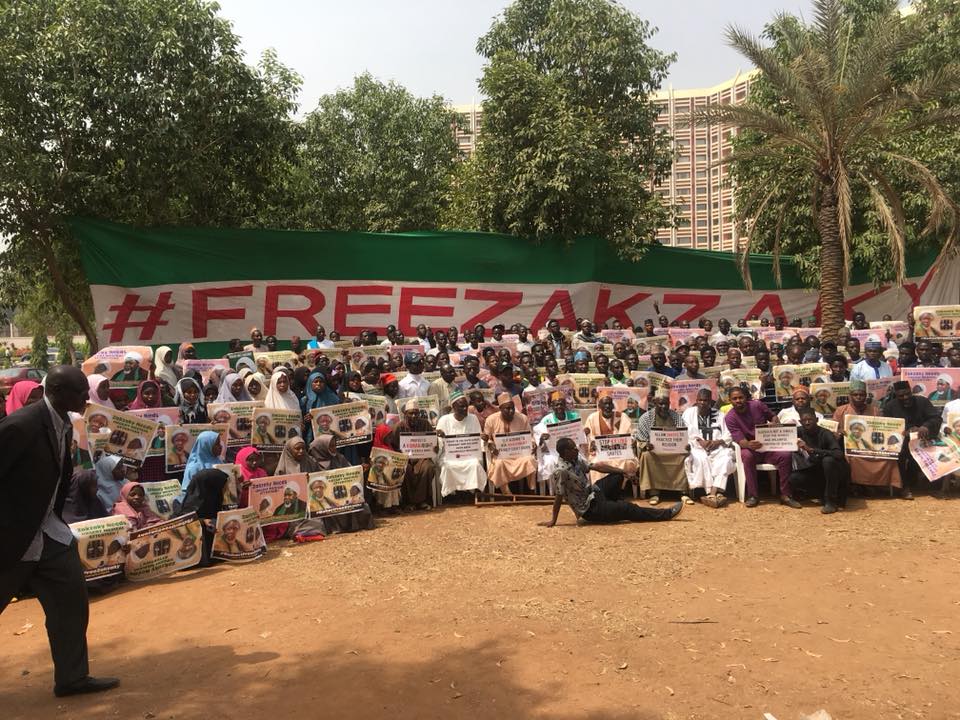 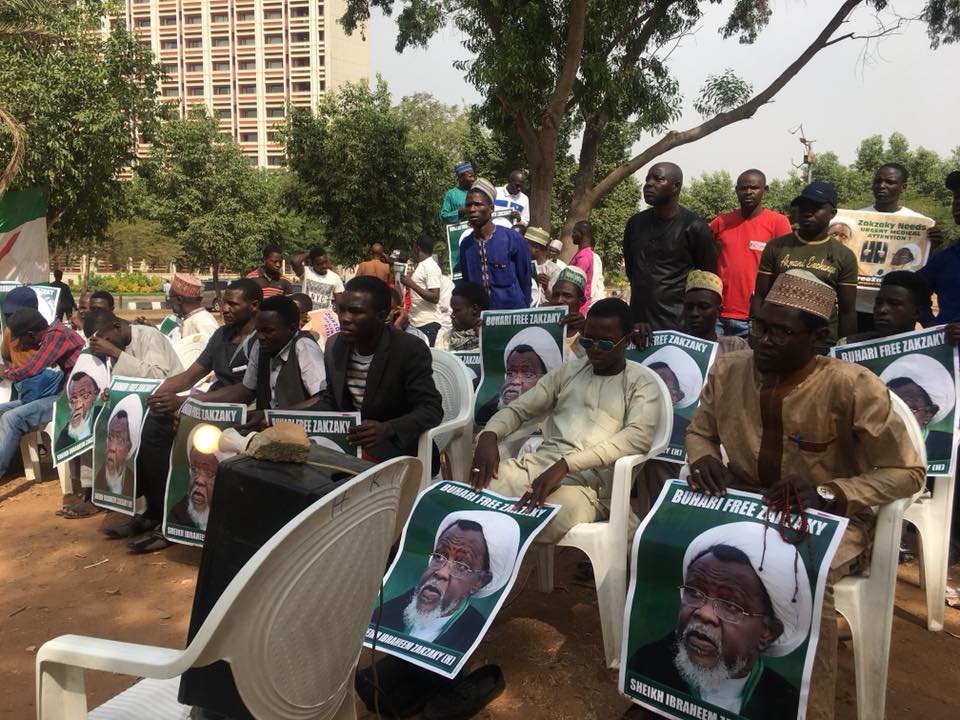 Overall Interest Of The Public Must Be Considered Before Obeying Court Orders, AGF Malami Says
27 January 2018

The Federal Attorney General, Mr. Abubakar Malami SAN, has yet again thrown another indication that he upholds tyranny and impunity over and above the rule of law and justice when he claimed that “public interest” as determined by him must be considered before obeying court orders.

He made this dangerous assertion in an interview with a magazine published monthly as revealed by Premium Times recently.

When asked why the Federal Government had refused to release the leader of the Islamic Movement of Nigeria, Ibrahim El-Zakzaky, he claimed the overall interest of the public must be considered before obeying court orders.”

The Minister of justice, who is also a Senior Advocate of Nigeria, clearly showed his preference of impunity and dangerous misuse of power over natural justice, rule of law… 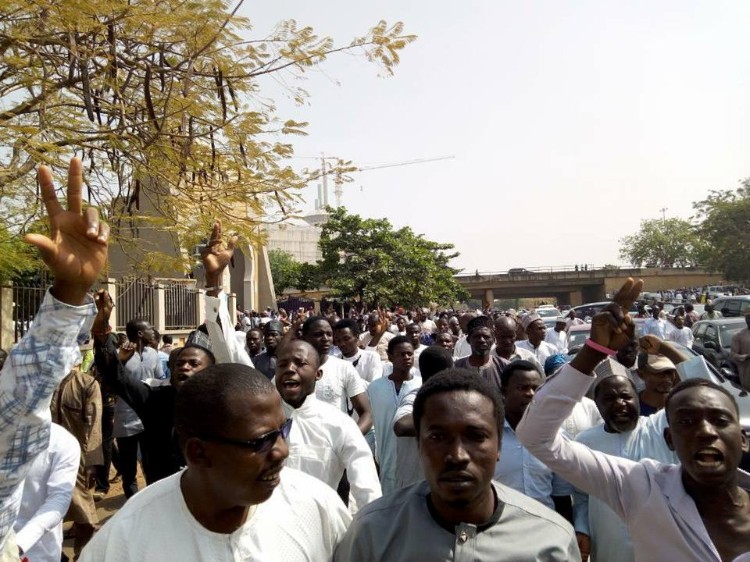 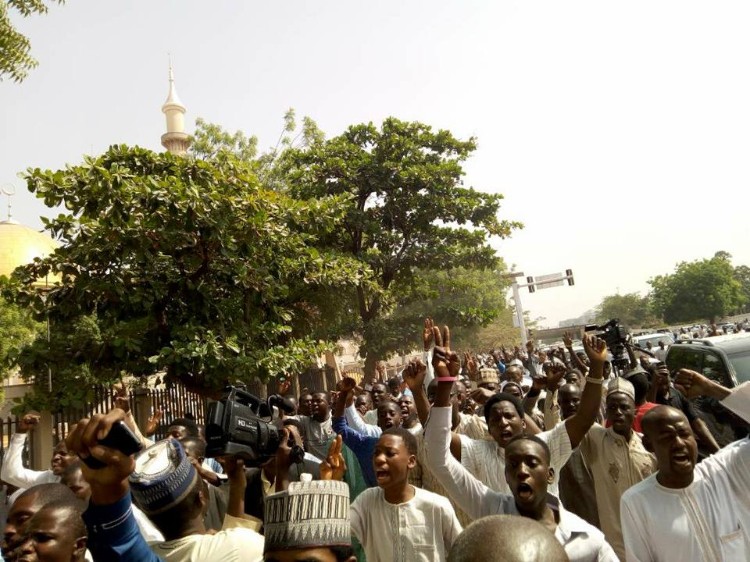 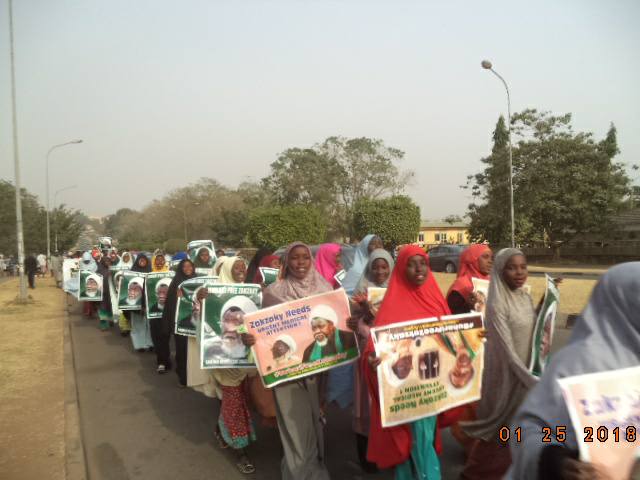 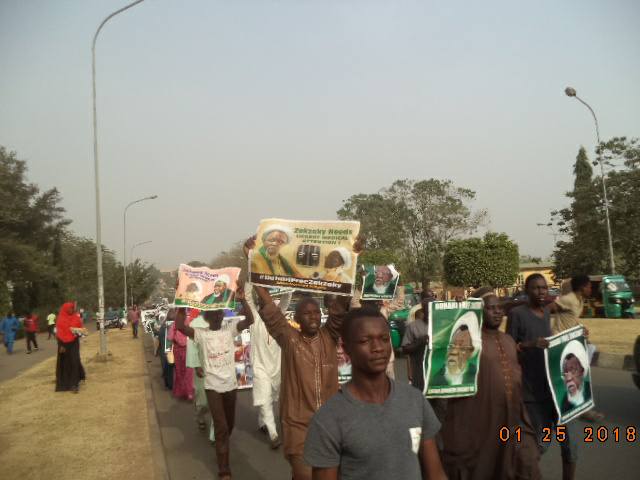 FG Dragged To Court For Contempt In Refusing To Release Sheikh Zakzaky, Wife
23 January 2018
A contempt of Court proceedings has been opened against the Director General of State Security Service, the Nigerian Police Force and Attorney General of the Federation (AGF) for failing to obey the judgement of Justice Kolawole of the Federal High Court Abuja with regards to the continued detention of Sheikh Zakzaky.

In the Notice in Form 49 filed by Counsel to Sheikh Zakzaky, Femi Falana SAN on 22nd January, 2018, referenced Appeal number: CA/A/64/2017, Suit number: FHC/ABJ/CS/247/2016 between Sheikh Ibraheem Zakzaky, the applicant and State Security Service, the Contemnor/Respondent, The Nigerian Police Force and the Attorney General of the Federation, respondent said that; pursuant to Order IX, Rule (13) of the Judgement and (Enforcement) Rules Section 308 Section 72 of the Sheriff and Civil Process Act, 2004, a notice to show cause why order of the contemnor/ respondents committal to prison should not be made…

IHRC has written to the Nigerian High Commissioner in London asking for an urgent meeting to discuss the health of the ailing leader of the Islamic Movement of Nigeria, Sheikh Ibrahim el-Zakzaky.

The sheikh suffered a stroke earlier this month aggravating an already poor state of health and prompting supporters to ask that he be freed from detention to receive medical treatment.

Last week IHRC wrote again to the Nigerian President Obasanjo Buhari asking him to intervene to secure Sheikh Zakzaky’s release. To date no reply has been forthcoming.

In the letter to the High Commissioner George Adesola Oguntade, IHRC urges him to allow the sheikh to travel abroad to receive specialist care… 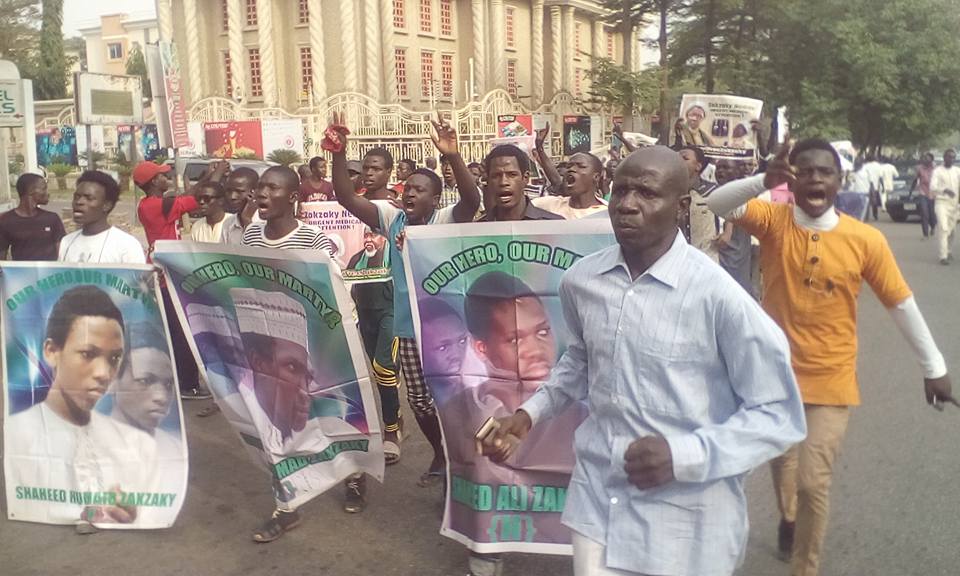 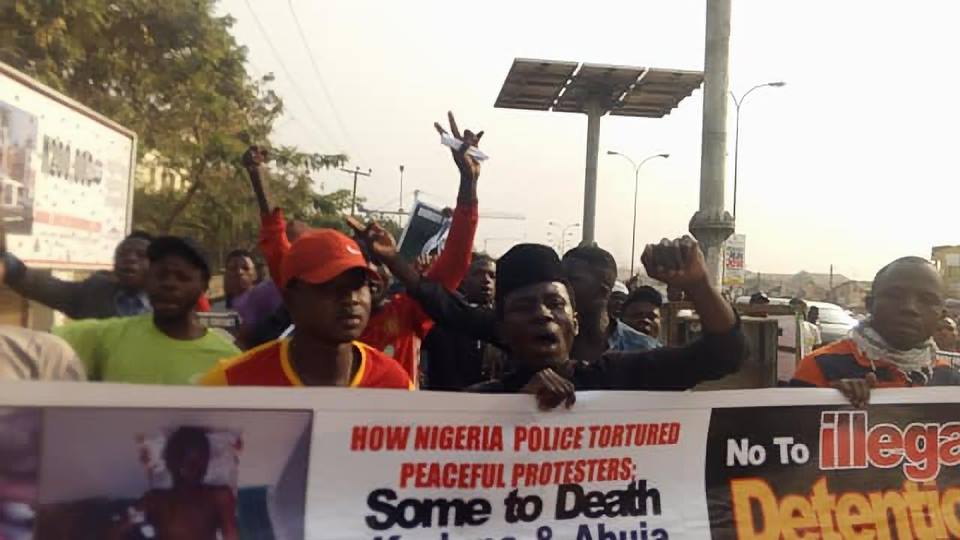 In spite of the court order the Zakzakys remain in the custody of Nigerian security services with little sign that the latter intend to release them any time soon, if at all…

The Court of Appeal in Abuja has rebuked the country’s government saying it cannot tolerate defiance of its injunctions in respect of the release of the illegally detained leader of the Islamic Movement of Nigeria, Sheikh Ibrahim el-Zakzaky.

The move came as judges sat to hear a government appeal against a court order made over a year ago that Sheikh Zakzaky and his wife be released.

That order of the Federal High Court on 2 December 2016 demanded that the pair be freed within 45 days as their incarceration was illegal and unconstitutional.

Sister Whose Five Children Were Killed, Herself Survived With Bullet Wounds finds No Respite Even At Home
26 January 2018

Malama Jummai Ahmad Karofi, a graduate of Ahmadu Bello University and a mother to five children shot during the Zaria December 2015 massacre and probably included in the mass grave, whose other son as well as herself were equally shot but survived with bullet wounds, here complains of continued persecution even in their private home by El-Rufai government, simply for being Sheikh Zakzaky’s supporter. Click here to watch her story