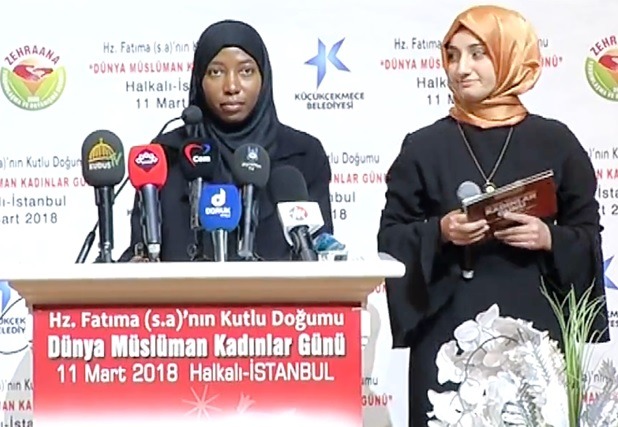 Below please find an update on this week’s daily sit out and regular Free Zakzaky protests in Nigerian capital Abuja and other cities in the country. Also an update on deteriorating health condition of Sheikh Zakzaky.

We request campaigners to write to the Commonwealth Secretariat and raise your concern about the inactive role of the Commonwealth and demand immediate action to end human rights violations by the Nigerian government. Model letter provided in Action Alert.

Contact Us page link on Commonwealth website is not functional, please click on the following link to send an email.
1. CLICK HERE to send an email to Commonwealth or use model letter provided below to send it by Post
2. Please forward any response you receive to IHRC on info@ihrc.org.

I am writing to express my deep concern about the continued violations of the human rights of members of the Islamic Movement of Nigeria (IMN), and to raise my concerns about inaction of the Commonwealth in seeking to end these violations by the Nigerian government. Since the Zaria Massacre and the imprisonment of IMN’s leader Sheikh Ibrahim Zakzaky in December 2015 the situation has progressively deteriorated for the movement and its supporters.

I am sure you are aware of the International Criminal Court’s Report on Preliminary Examination Activities (2017). In this report the ICC stated they had made a preliminary determination and would seek further clarification of the events from the Nigerian government. This is a clear indication that the ICC believe the massacre may be a crime against humanity.

We understand the Commonwealth is monitoring the situation but this matter has now dragged on for over two years and requires urgent action over and above just monitoring the situation, especially as innocent lives are at risk. Hundreds were arrested following the massacre and remain in prison despite no conviction. Many of those who were present and wounded are still awaiting treatment for injuries as they are being denied access to medical treatment. Nigerian authorities are regularly attacking IMN members and in recent FreeZakzaky protests over the last two months they have arrested, tortured, and killed many of the peaceful protesters, including senior movement leader Sheikh Qaseem Umar, who was shot by Nigerian police while peacefully protesting the illegal detention of Sheikh Zakzaky.

Shaykh Zakzaky was arrested by Nigerian military on 14 December 2015 and has been held since, contrary to a clear court order to set him free. Since his arrest, Shaykh Zakzaky has lost his sight in one eye and the use of one arm. Shaykh Zakzaky also suffered a stroke in January 2018 which has further aggravated his dire condition. His condition requires specialist medical attention, and may need him to travel abroad to get treatment.

Due to the seriousness and urgency of the situation I demand that the Commonwealth Secretariat takes the following action:

Yet Another Massive FreeZakzaky Protest in Abuja
16 March 2018
Protesters from different walks of life continued to come out in support of their detained leader Sheikh Ibrahim Zakzaky. Thousands of Men and Women regularly protest on daily basis in Nigerian Capital Abuja to demand immediate release of Sheikh Zakzaky and justice for the victims of Zaria Massacre. Click on the following link to watch a short video clip.

The daily Free Zakzaky sit-out by the Coalition of Groups led by the Concerned Nigerians and it is as active as ever. The sit out is continued in Abuja organised by Concerned Nigerians and other NGOs. Every day large number of protesters join this Sit Out and call for the immediate release of Sheikh Zakzaky and his wife for medical attention.
Click on following to watch a short clip of Sit Out on Women’s International days. Some Special Dignitaries were invited such as Malama Maimuna Abdullahi the Widow of Sheikh Muhammad Turi the deputy of Shieikh Zakzaky.

Interview with Dr Nusaiba daughter of Sheikh Zakzaky by Quds tv in Turkey
15 March 2018
Click Here to watch the video clip of Interview with Dr Nusaiba Ibraheem the daughter of the Sheikh Ibraheem Zakzaky, the detained leader of the Islamic Movement in Nigeria, Sheikh Ibraheem Zakzaky by Quds TV in Turkey. The interview was conducted during her recent visit to Turkey where she attended the Commemoration of Sayyidah Fatimah Zahra(SA)’s birthday commemoration on Sunday the 15th of march 2018 organised by Zahra Foundation, Turkey.

It was a beautiful atmosphere as thousands chanted “Ibraheem Zakzaky is our honour” as the Sheikh’s daughter, Nusaiba Zakzaky took to the stage in Istanbul, Turkey to address the teeming crowd that attended the World Muslim Women’s Day.

Others were chanting, “O Zakzaky! Your path is our path, your struggle is our struggle.”
Others gave a standing ovation with “I am just one soldier of Zakzaky army. He is my leader and my commander,” all over the hall. 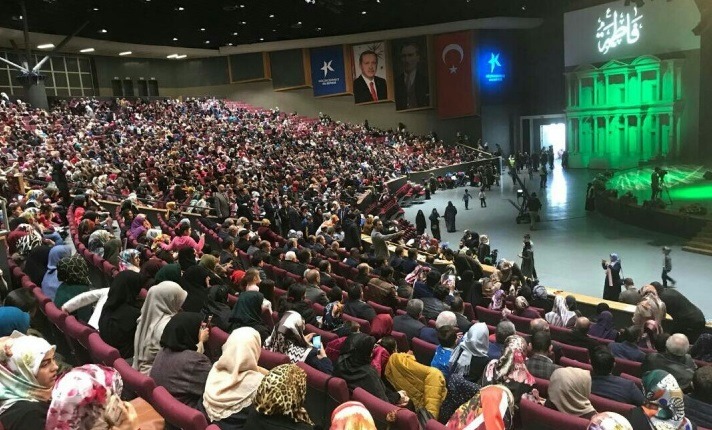 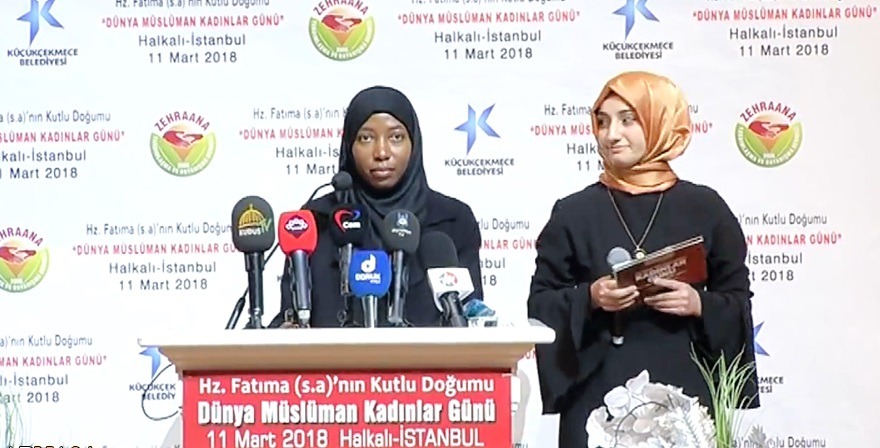 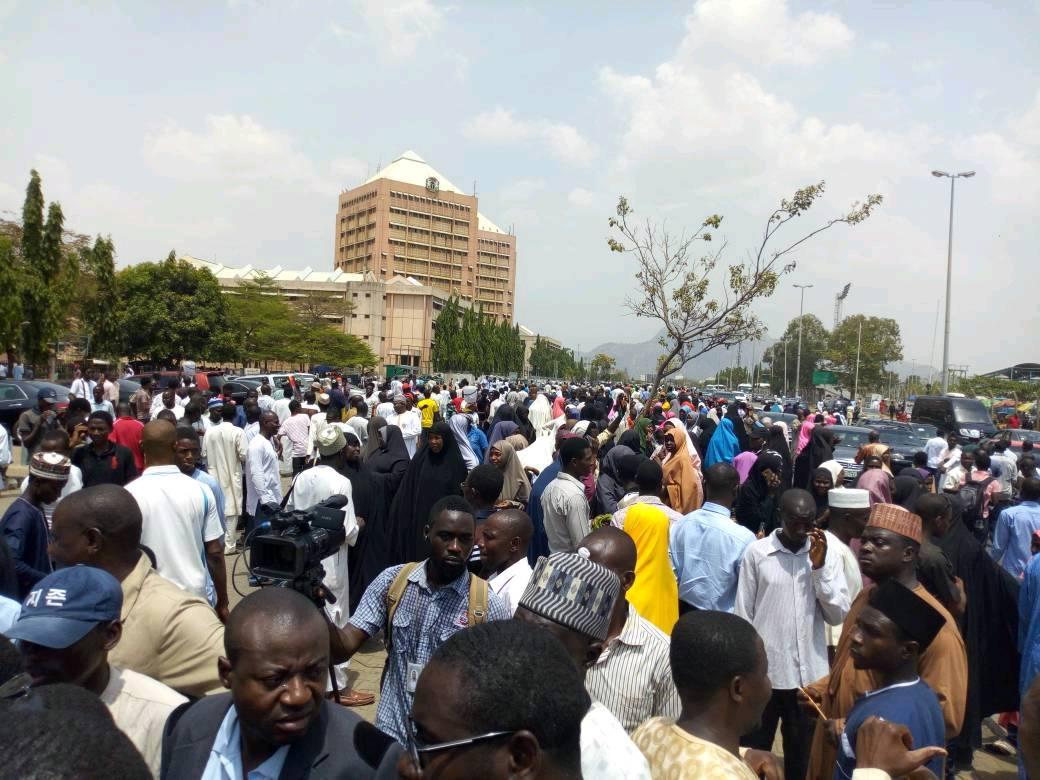 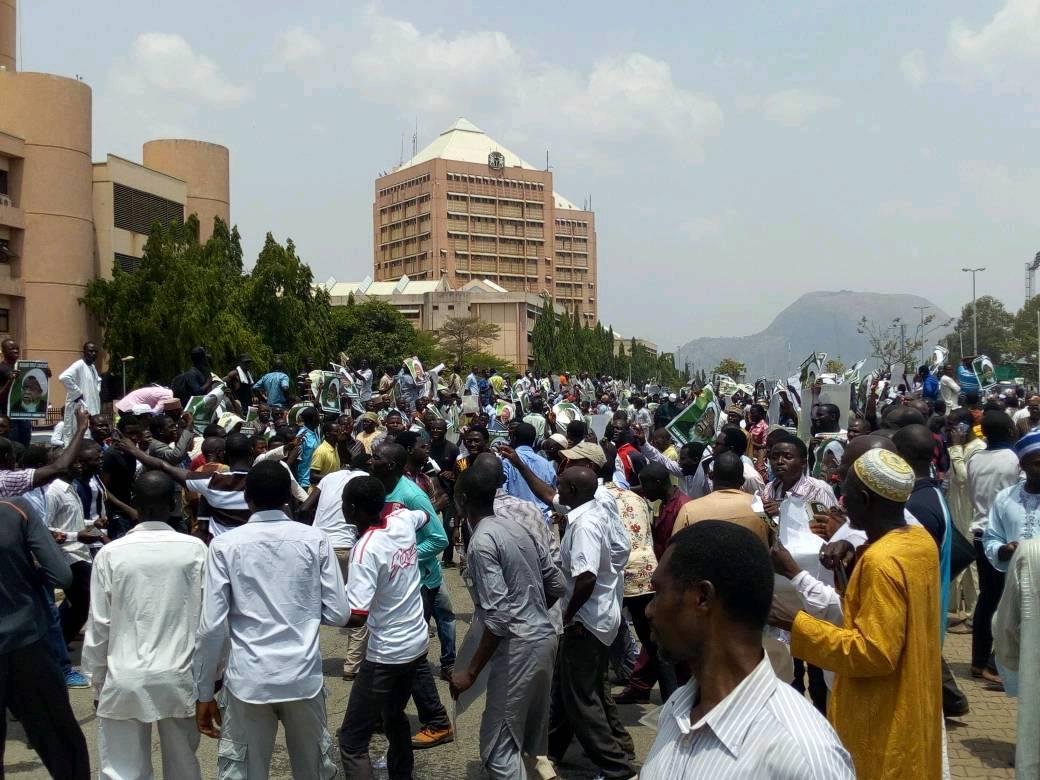 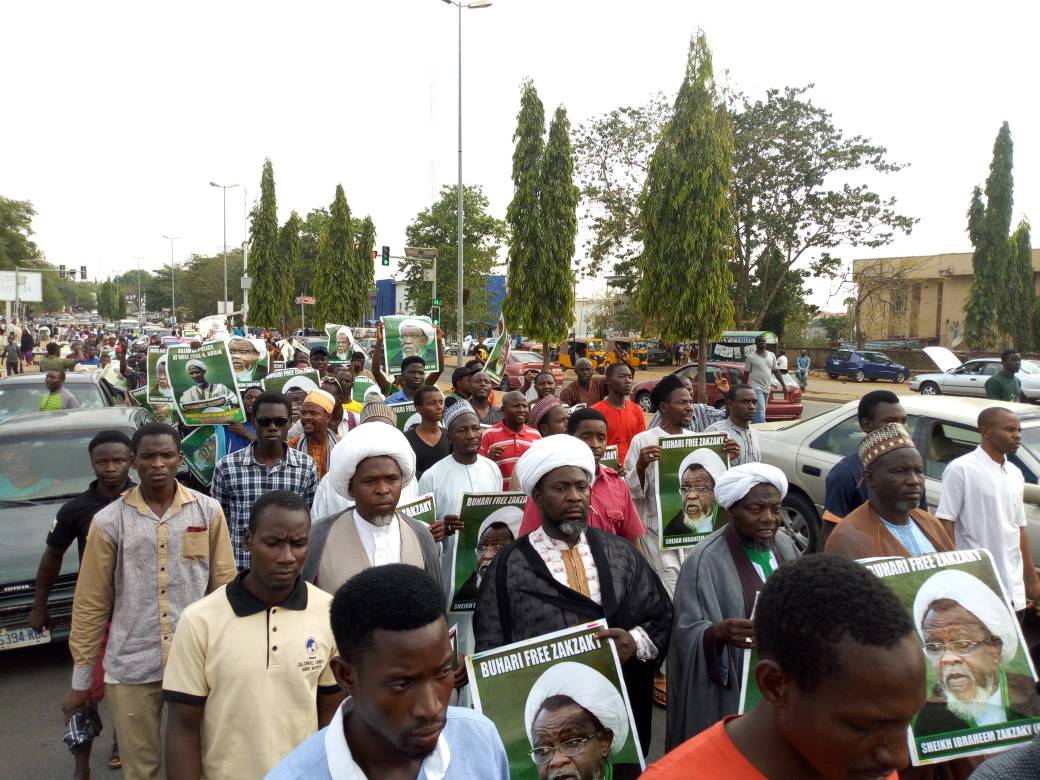 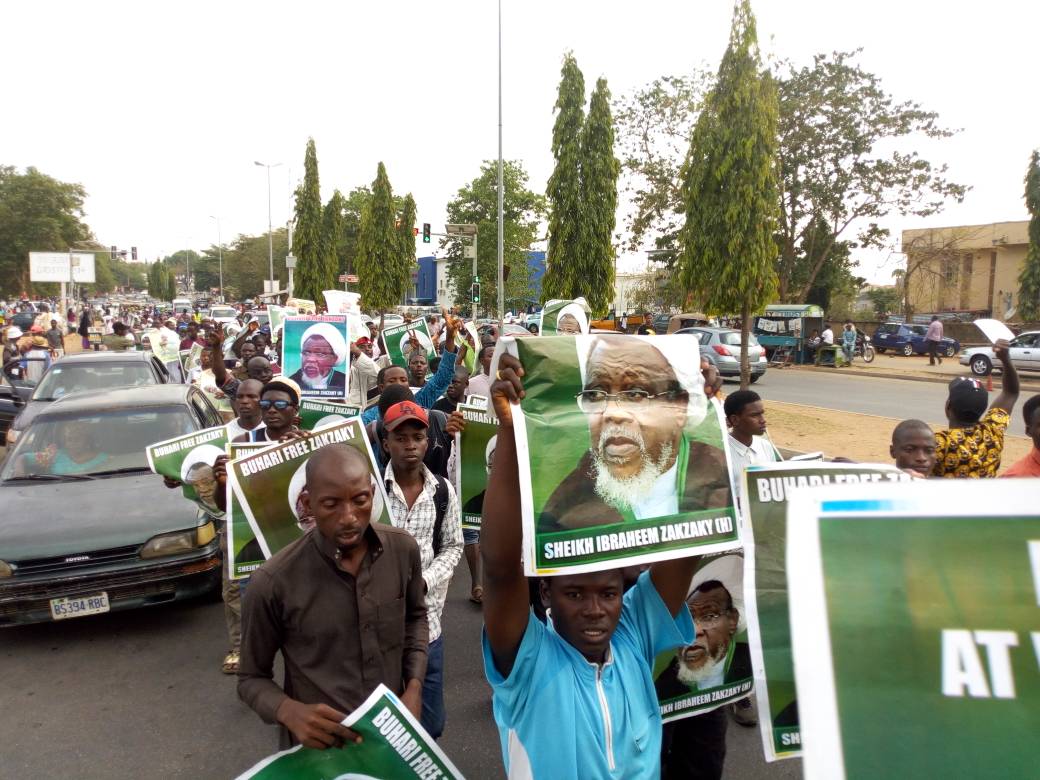 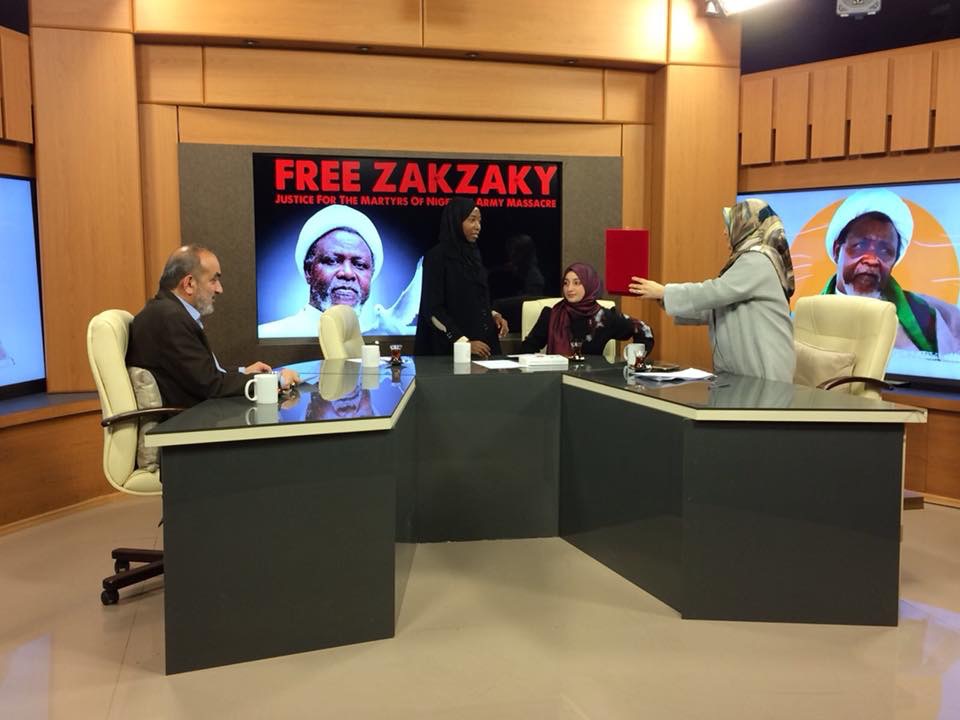 Sheikh Zakzaky is still in serious need of treatment from Professionals, his eyes need surgeries, there is also a bullet pellet in his left wrist, and he’s currently suffering due to the stroke. Lawal Daura (DSS Boss) did nothing practically since the staged interview.

Lawal Daura is torturing Sheikh Zakzaky by not allowing him to get treatment from Professionals, instead of freeing the Sheikh to get medical attention, he’s instead providing semi professional DSS physician to treat the Sheikh without any good equipments.

His wife Malama Zeenat’s condition is also worsening she still have bullet in her stomach which requires surgery to be removed, her knees also need surgery to be replaced, her vision is also going bad, she’s hit by the Soldiers on her nose as a result it breaks she wasn’t treated

The last blood tests shows she have “impaired sugar”, which means she’s at the risk of becoming diabetic. And her cholesterol level is higher than normal. All this courtesy of Lawal Daura’s illegal detention of the due, and @MBuhari criminal silence.

Free Sheikh Zakzaky Protest in Abuja on 12 March
12 March 2018
A peaceful free Zakzkay protest was staged in Abuja on Monday the 12th of March 2018 by youth. The protest took to the streets of capital Abuja chanting for the immediate release of the Sheikh and other innocent members of Islamic Movement of Nigeria. Click on following link to watch short clip of the protest.