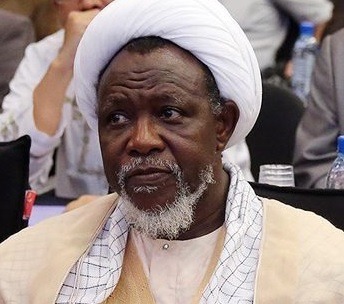 Below, please find an update on the continuous demonstrations and sit-outs in the Nigerian capital, Abuja. The Buhari government filed eight counts of trumped up charges against Sheikh Zakzaky and his wife in Kaduna State in a desperate effort to distract attention and curb these massive FreeZakzaky Protests. Also, the director of the State Security Service met Sheikh Zakzaky to pressure him as to his future plans, if released.

In this week’s Action Alert, we request campaigners to write emails / letters to the Commonwealth, demanding their intervention for immediate release of the Sheikh and all those unjustly imprisoned, and justice for the victims of the Zaria massacre.

2. If you have not received a response for last week’s email please CLICK HERE to send a follow up email.

3. If you received a response please forward it to IHRC at info@ihrc.org

I understand the recent Commonwealth Heads of Government Meeting was largely used to discuss the next head of the organisation. Whilst no doubt important, this would have been a prime opportunity to raise concerns about the illegally detained Sheikh Zakzaky and question the President of Nigeria about the unacceptable state of affairs and loss of innocent lives in Zaria.

The Commonwealth’s silence on this issue is putting more innocent lives at risk. Just within the last couple of months, Nigerian authorities have killed at least 6 peaceful FreeZakzaky protesters, and arrested, tortured, and injured hundreds of them with live bullets in a barbaric show of force.

I am writing to ask for your urgent intervention to allow the illegally detained Sheikh Zakzaky and his wife to leave Nigeria for urgent medical treatment due to their critically deteriorating, life-threatening medical conditions. The Sheikh’s personal doctor confirmed in his most recent report that his only remaining eye in in danger due to chronic glaucoma and recommended him to be taken abroad for urgent treatment by a specialist, as this is not available in any Nigerian hospital.

I am extremely concerned as Sheikh Zakzaky suffered a stroke in early January and his condition has further deteriorated due to continued unlawful detention, preventing his medical treatment. He was shot multiple times more than two years ago, losing his left eye in the process, and is currently at a great risk of losing the other eye.

I urge your office to play an active role and make known in unconditional terms that the Nigerian government will be held directly responsible if anything happens to the Sheikh or his wife. Due to the importance and urgency of the situation I demand that the Commonwealth secretariat takes the following actions;

1. Send a representative to Nigeria to see Mu’allim Zakzaky, his family, and other detainees to assess their situation and intervene to allow specialist medical treatment outside Nigeria.

2. Suspend Nigeria’s membership of the Commonwealth for the violence perpetrated by its army against the IMN;

3. Demand the release of those held after mass arrests or being handed over to police without due process;

4. Demand the Nigerian government provide proper and immediate medical attention to all detainees;

5. Call for an independent investigation, under the auspices of an international body like the UN, into the violence and mass graves. The bodies of those in the mass graves need to be exhumed, identified, and returned to their families. The Nigerian government and army needs to be held accountable for these crimes.

Sheikh Zakzaky Tells Lawal Daura: Tell Whoever Gave You My Custody To Go Ahead And Complete The Contract
27 April 2018 – By FreeZakzaky

The leader of the Islamic Movement in Nigeria, Sheikh Ibraheem Zakzaky has told the Director of the Department of State Security (DSS) and the Director of National Intelligence Agency (NIA) to inform those who gave them his custody to go on and complete the contact.

“The Sheikh said Daura asked him what he would do if he was to be released. Sheikh Zakzaky reminded him that it was only free people that negotiate. “I told him they have enchained me, how do they then engage in discussion with me? You can’t be detaining me and be negotiating with me at the same time.”…

Massive Free Zakzaky Protest in Abuja on Thursday
26 April 2018
A massive Free Zakkzay protest rocked Abuja again today on Thursday the 26th of April 2018. It kicked up from UTC Market to area 10. Thousands staged the protest chanting “free our leader” and other slogans. 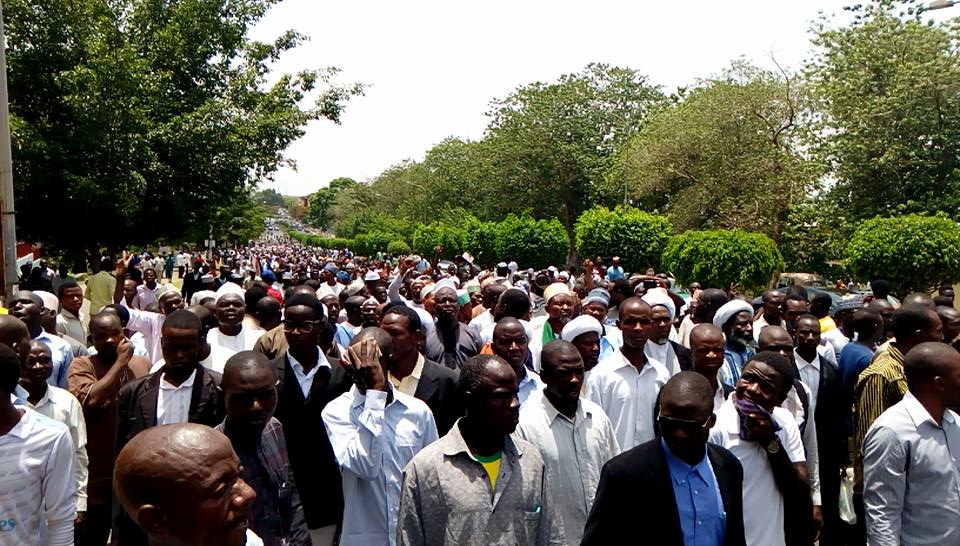 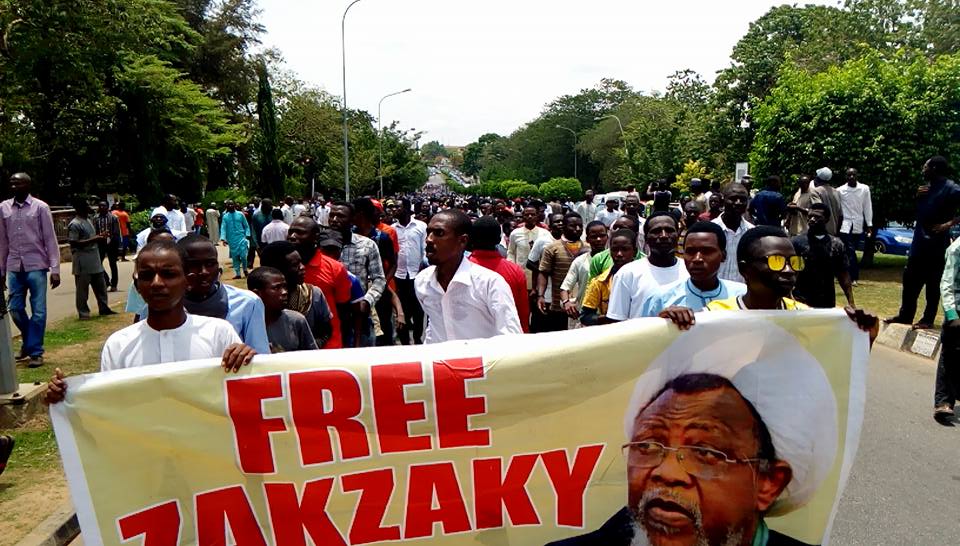 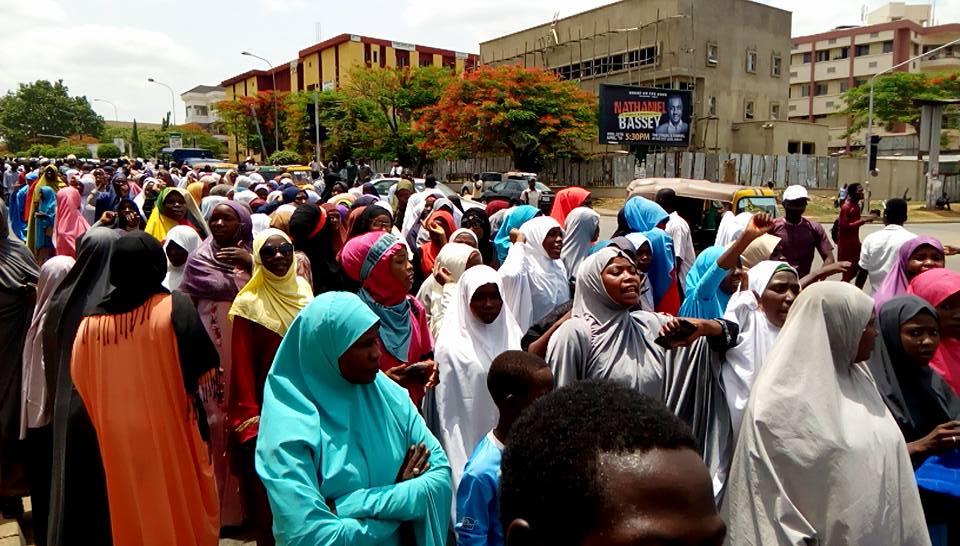 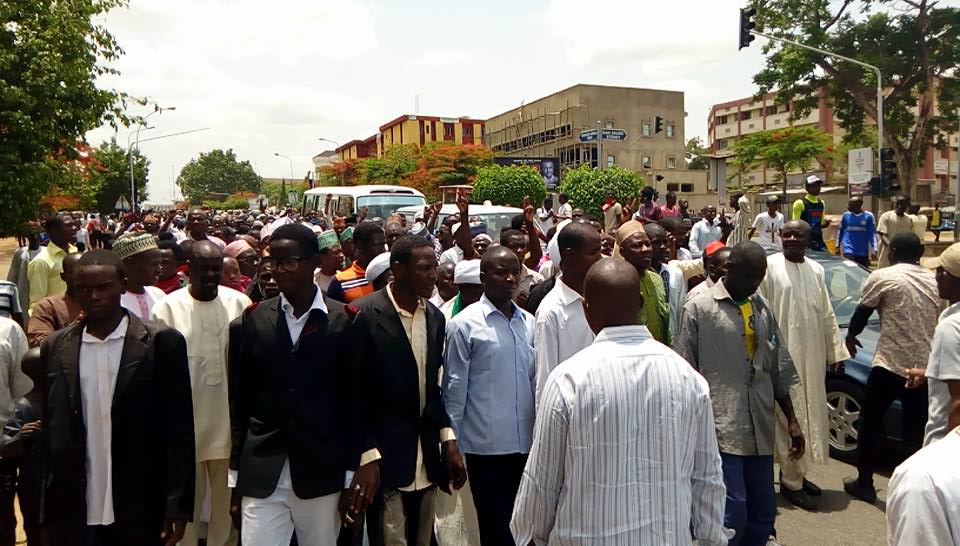 The decision by Nigerian authorities to charge the leader of the Islamic Movement of Nigeria, Sheikh Ibrahim el-Zakzaky, after illegally holding him in detention for two years demonstrates the desperation of the government and is yet another slap in the face of due process in the country.

Along with his wife and two others the sheikh has been charged with eight offences, the most serious of which is punishable by death.

The authorities claim that the sheikh and supporters of his group abetted the commission of culpable homicide when they allegedly blocked roads in the city of Zaria in December 2015.

In reality though the charge aims to deflect government responsibility for a planned and systematic attack by soldiers on the Islamic Movement that left at least 1000 civilians dead. Hundreds more were arrested. The government attack is the subject of a complaint by the IHRC to the International Criminal Court in the Hague…

Peaceful protest was staged in Abuja on Wednesday the 25th of April 2018 from Utako Market along Jabi Road. The Protest was terminated at Berger Bridge and closing prayer was said. Armed police arrived in the scene and started firing teargas on the protesters as they dispersed to their various places.

The Police, who look fearful and confused, followed a group of people as they were going back to their places and shamefully fired teargas on them, may be to report back to their bosses that they have carried the order given of them. 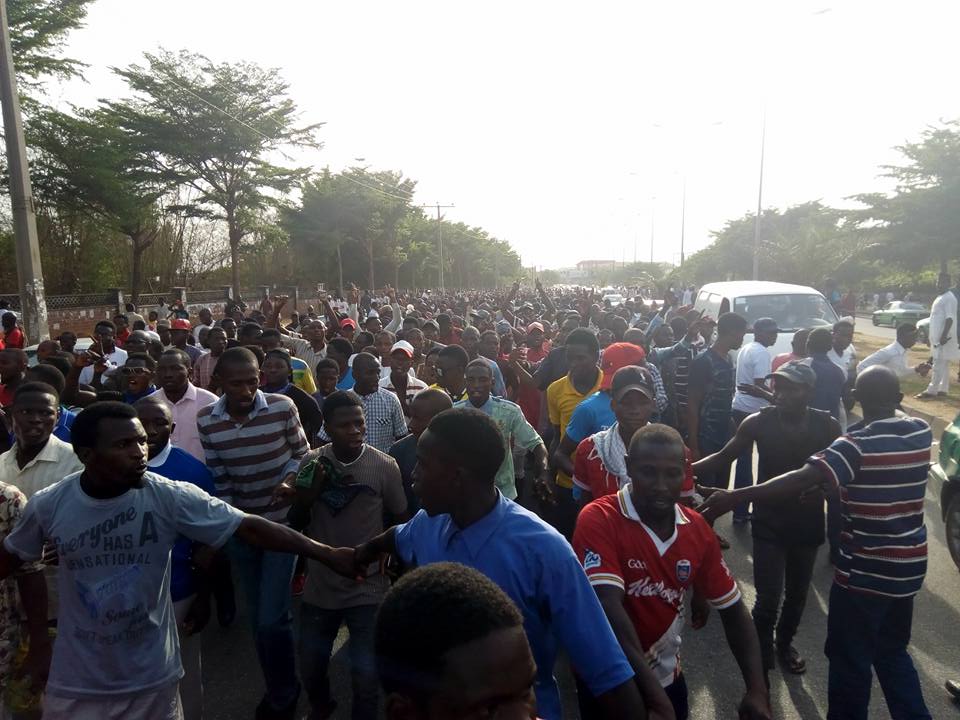 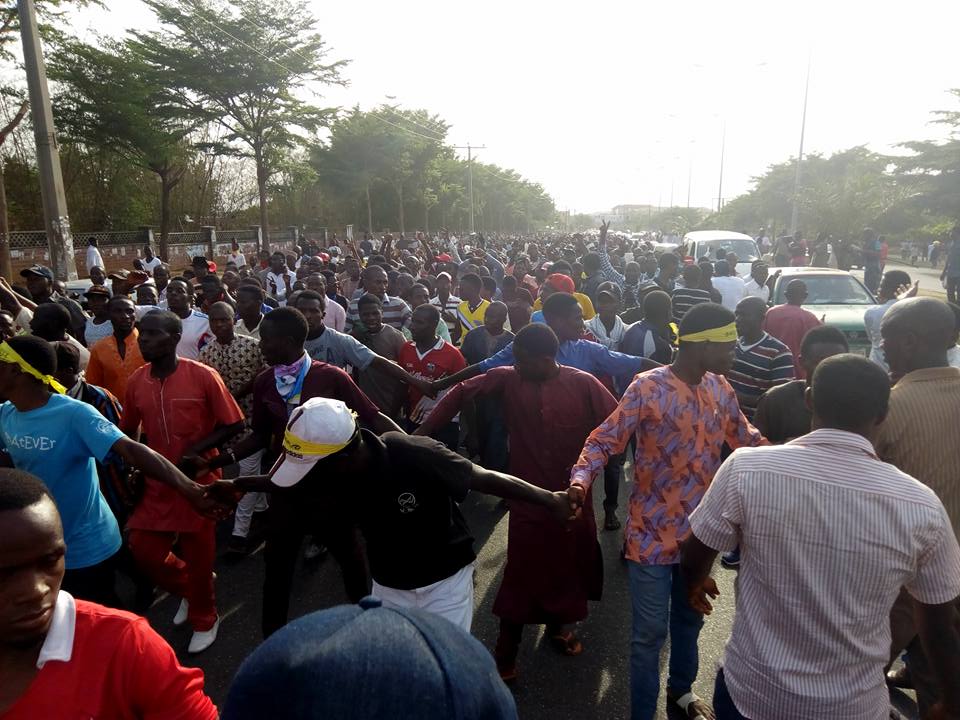 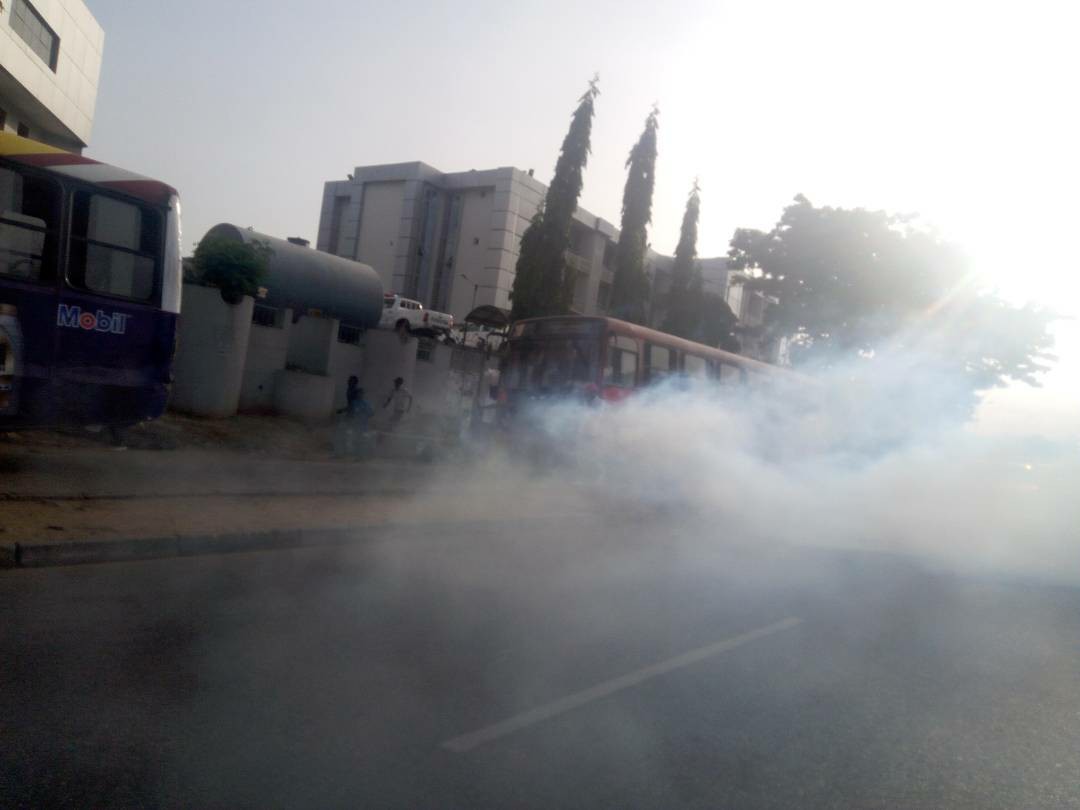 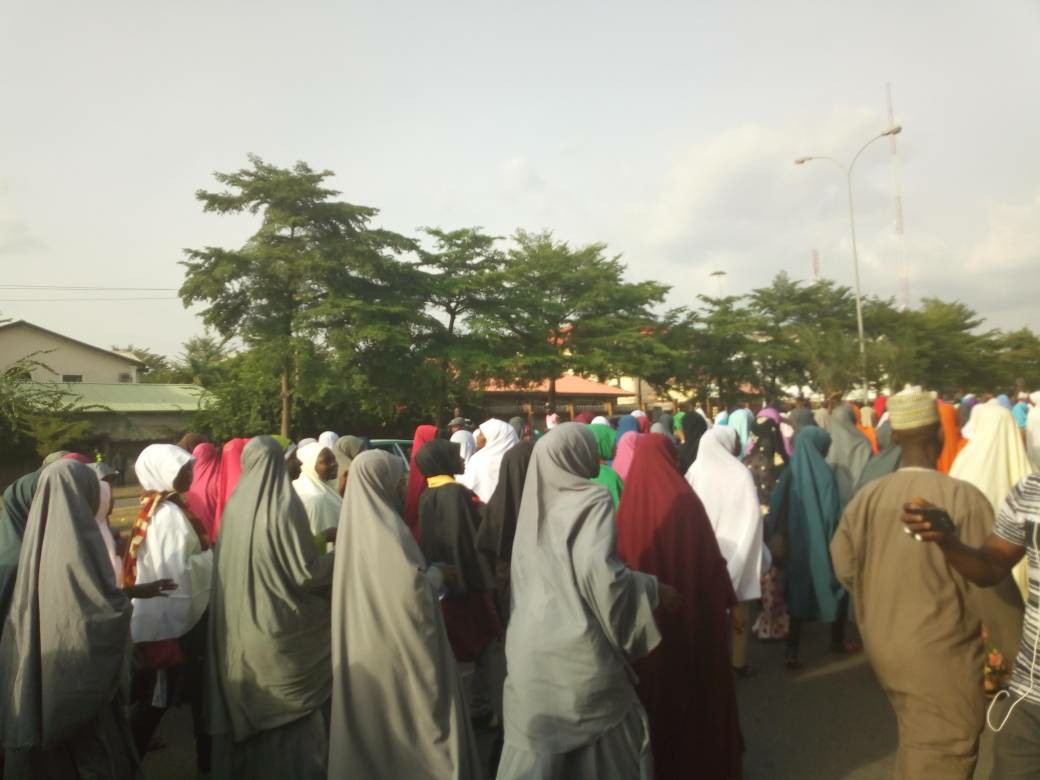 Contemptuous Buhari & Elrufai Charges Sheikh Zakzaky & Wife to Court:
24 April 2018
The recent Free Sheikh Zakzaky protest in Nigerian capital, Abuja, has put huge pressure on Buhari and his cabal to obey Court order and Free Sheikh Zakzaky and his wife. The Daily protest and Sit-out have attracted both National and international attention on the gross injustice and extreme wickedness of President Buhari against sheikh Zakzaky. In a desperate moves to maintain the illegal detention of Sheikh Zakzaky beyond the tenure of this government, Elrufai has finally charged the leader of the Islamic Movement in Nigeria, Sheikh Ibraheem Zakzaky, to court in Kaduna… 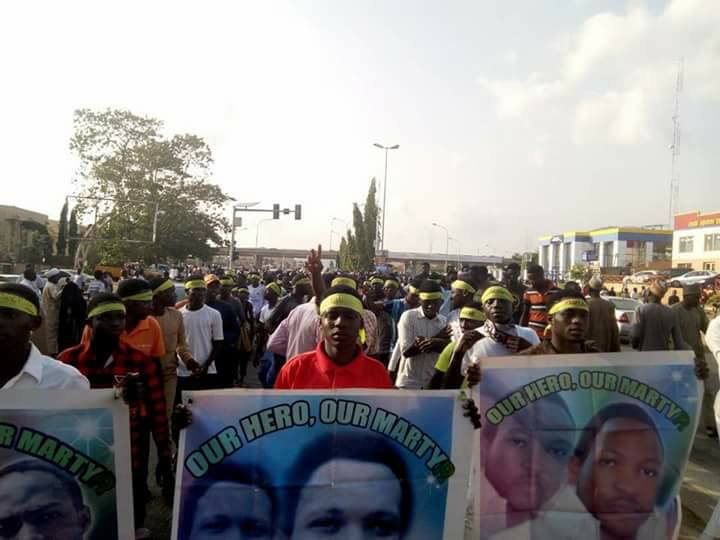 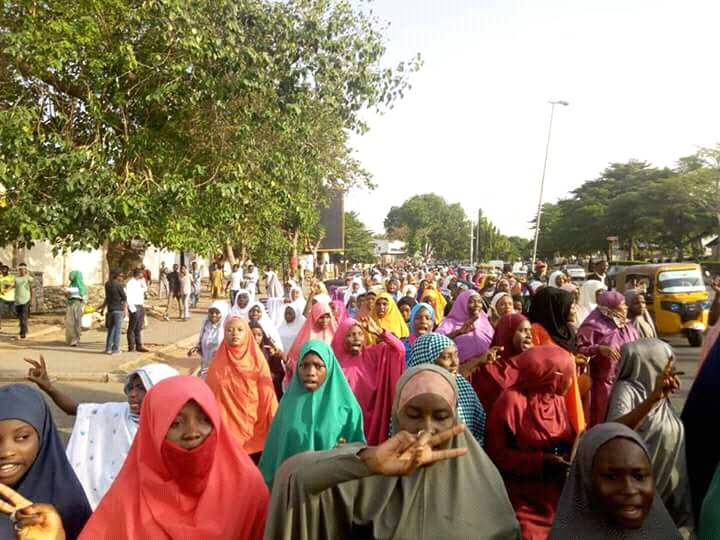 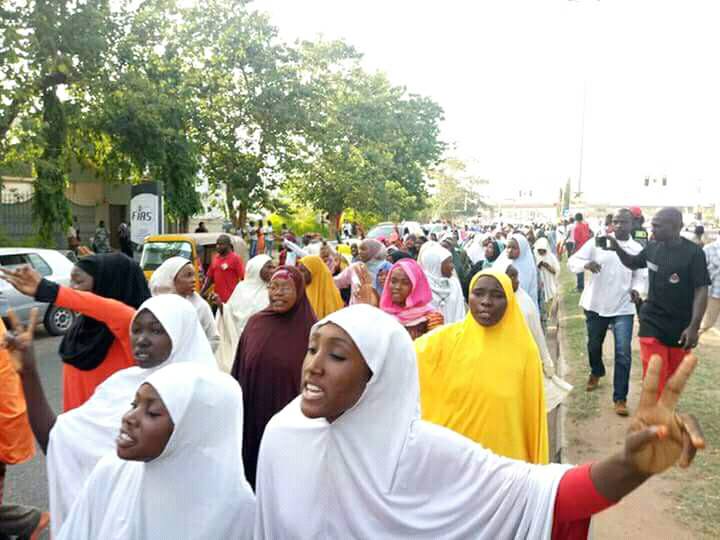 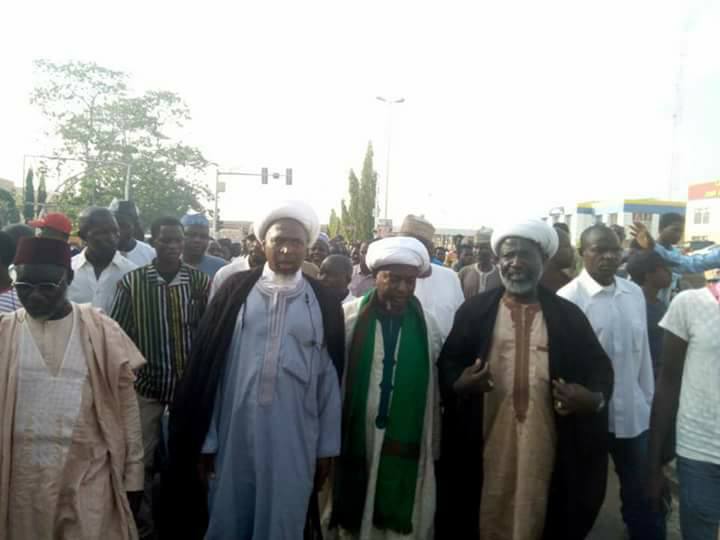 The United States government has released a condemnatory human rights report on Nigeria ahead of President Muhammadu Buhari’s visit.

The report said that grave violations continued to increase in 2017 while officials who perpetrated them were almost never prosecuted by the administration of President Buhari.

Buhari is scheduled to meet with President Donald Trump at the White House on April 30, and both men would likely discuss further U.S military assistance to Nigeria against the backdrop of serious human rights violations by security forces who use the same weapons to kill civilians.

The U.S. annual report on global human rights violations, released in Washington D.C. said the administration of President Buhari, “Took steps to investigate alleged abuses, but fewer steps to prosecute officials who committed violations, whether in the security forces or elsewhere in the government…

Shahid Ahmad Rufai Abubakar was laid to rest at Darur Rahma Cementry, Dembo Village Zaria on Tuesday the 24th of April 2018. Ahmad attained martyrdom when he was shot by Nigerian Police in Abuja on Monday 16th of April 2018 during Free Zakzaky Protest. His funeral prayer was conducted on the spot he was shot in Abuja on Monday the 23rd of April 2018. His body was then transferred to Zaria for burial which took place on the 24th.
Ahmad was described by his parents as a youth of upright manner. His friends also described him as young boy of sound character. 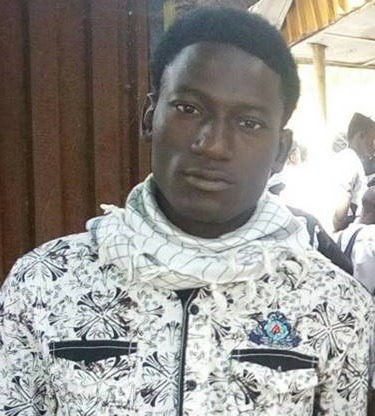 The Funeral Prayer of Shaheed Ahmad Rufai Abubakar took place today Monday the 23rd of April 2018 in Abuja who was shot by Nigerian police in Abuja on Monday the 16th of April 2018. The bullet hit him so hard that his brain leaked out.

He spent three days in coma before he succumbed to his injury in Kano Teaching Hospital on Tursday the 19th of April 2018. The Funeral prayer was led by Sheikh Sansui Abdulkadir. After the funeral prayer a peaceful protest was staged to the office of the National Human Right Commission. While the protesters were at the National Human Commission lodging complain about Human Right abuses of the Nigerian Police, the police opened fire on the free Zakzaky protesters. At least two have been killed and scores injured and many arrested. Some injured were also whiskered away by the police.
Click Here (Caution: Graphic Pictures) for some of the pictures of injured by bullets, tear gas and water cannon used by Nigerian Police. 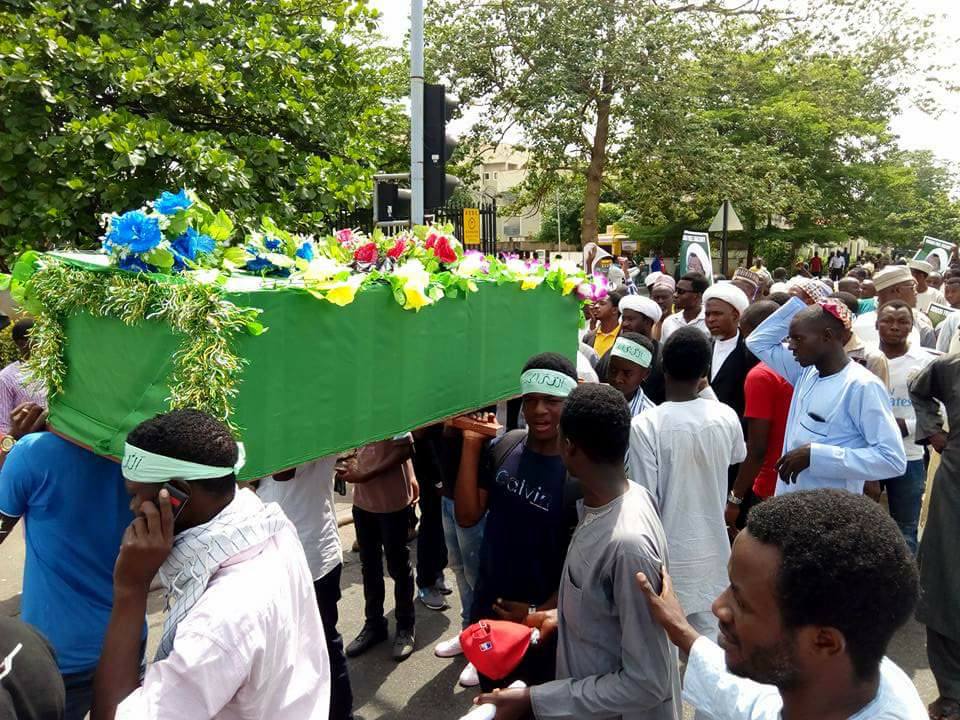 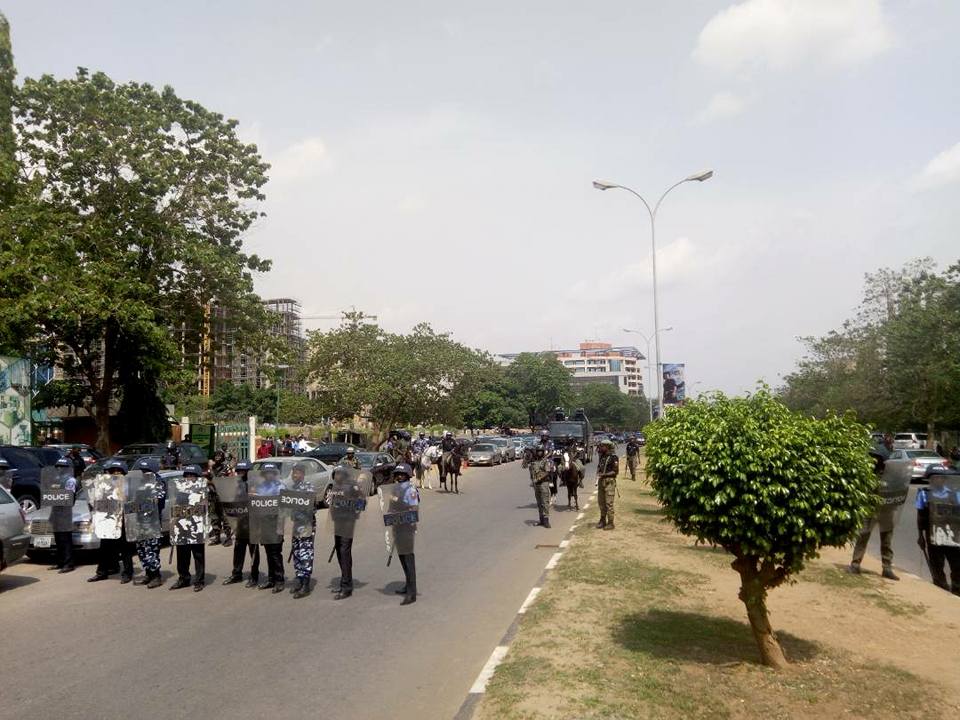