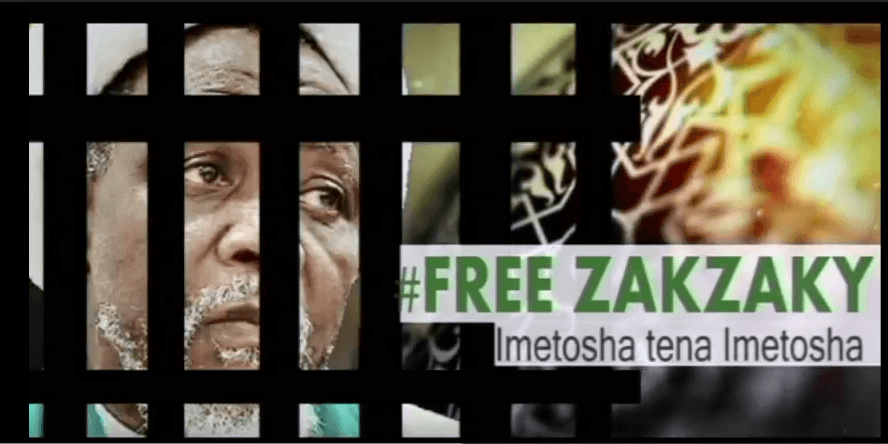 Below please find an update on the continuous Free Zakzaky protests in the Nigerian capital Abuja. The sustainability of these protests is unusual given the deceptive and barbaric tactics used by the security services in a bid to stop these nationwide ongoing FreeZakzaky protests in Nigeria. 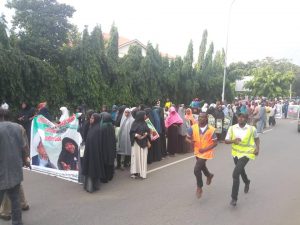 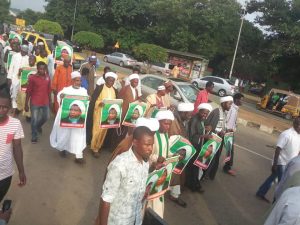 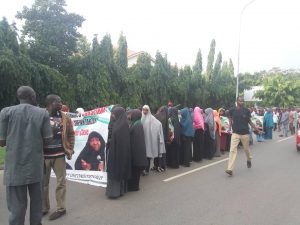 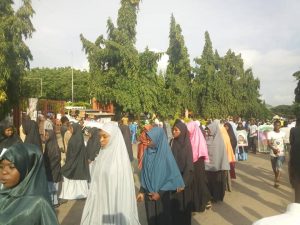 The Islamic Movement in Nigeria has accused Kaduna state government of Elrufa’i of sponsoring hate speech campaigns against it, with the public presentation of a Book early in the week at Arewa House, Kaduna, during which Shias were called infidels by the organisers of the event.

This was made known to the Press today in a press statement released by the President of the Media Forum of the Islamic Movement in Nigeria, Ibrahim Musa.

The Islamic Movement in Nigeria wishes to express its outright disapproval of the current campaign of calumny against the Shia Islamic faith in general and the Islamic Movement in particular during the book presentation on Sunday 11/08/18 at Arewa House, Kaduna, where Kaduna state Governor was the Chief Host.

“Though the book presented was titled “Fallacy of Shi’ites beliefs,” the scholars were reported by some national dailies to have said that “Shiites, threat to National Security.” We feel this news headline deserves our condemnation. How about if we say: “Sunnis, threat to National Security,” will followers of Sunni Islam in Nigeria not get offended?” according to the Press Statement.

The Islamic Movement said, “We are extremely concerned that this title is similar to some of the scary titles you read about Muslims on the websites of Far Right movements who are busy spreading Islamophobia in the West in particular and …

“We belong to Allah and to Him we shall return!” What a calamity! 980 days have passed since when the tyrannical regime of the federal government is detaining the Leader of the Islamic Movement in Nigeria, Sheikh IbraheemZakzaky, even though a federal High court has ordered for his release almost two years ago. Indeed any well-meaning Nigerian will begin to wonder what the federal government up to when it flagrantly disregard a valid court order to release the Sheikh and instituted some spurious charges against him recently.

Since 12th December, 2015, when the Nigerian Army brutally attacked Sheikh Zakzaky and his followers in Zaria, we have been staging peaceful protests from time to time on the streets, with rallies in mosques, showing our anger on the injustice being meted against us and the continued detention of our Leader, but to date the government is playing the Ostrich, pretending not to notice protestation.

Instead of even acceding to our demand for justice to the victims of the Army massacre in Zaria, we have been witnessing some unfortunate moves being made to sweep under the carpet the atrocities committed against us in Zaria. The most recent is the meeting held in Kaduna on Sunday 12/08/18, where a public presentation of a book authored by Prof. Umar Labdo titled ‘The fallacy of Shi’ites beliefs’ was done. They should know that we are aware of their diabolical ways from their Saudi sponsors to the federal and state governments doing their bidding to stop the rapid understanding of the Islamic Movement they flatly call the Shia.

Another fresh Free Zakzkay protest was staged in Abuja on Wednesday the 15th of August 2018. 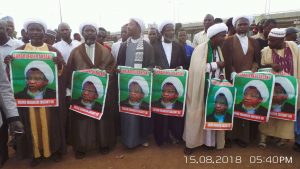 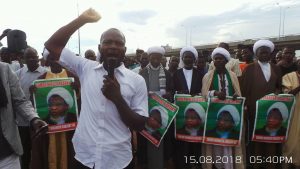 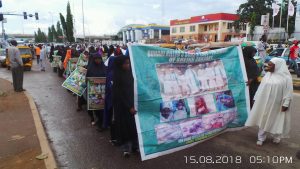 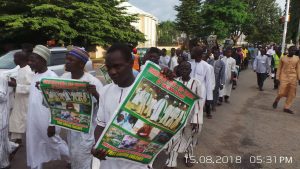 The renowned human rights activist and chief Counsel to the Islamic Movement in Nigeria, Mr Femi Falana SAN, has written a letter to the new acting DSS director, Mr Mathew Seiyefa calling for the immediate release of Sheikh Zakzaky and hundreds of others being illegally detained by the security outfit.

Below is the text of the letter.

Request for the urgent release of hundreds of persons detained illegally by the State Security Service.

We congratulate you on your appointment as the Acting Director-General of the State Security Service (SSS).

While wishing you a successful tenure we urge you to restore the lost glory of the SSS by restricting the management and staff of the organisation to the prevention and detection of any crime against the internal security of the Federal Republic of Nigeria in accordance with the National Security Agencies Act.

We are however compelled to draw your attention to the fact that our law firm has had a running battle for the last three years with Mr. Musa Daura, the immediate past Director-General of the SSS as a result of the incessant arrest and detention of Nigerian citizens and foreigners without trial. Some of the infringements of the human rights of criminal suspects and other persons perpetrated by Mr. Daura include…
Click here to read the full text of the letter.