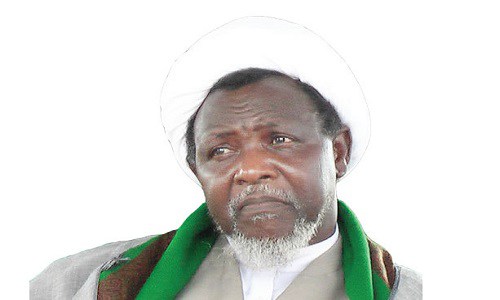 Below please find an update on the continuous Free Zakzaky protests in the Nigerian capital Abuja. This week once again, Sheikh Zakzaky was forced to spend another Eid Al-Adha behind bars.  He and Muallimah Zeenah are illegally detained by the Nigerian authorities since December 2015.

The Islamic Movement in Nigeria has cried out over the activities of some civil society groups waging a campaign of calumny against it in the media, which it says is sponsored by the Nigerian Army.

President of the Media Forum of the Islamic Movement in Nigeria made this known to newsmen in a Press Statement he issued today. Below is the full statement:

“The Islamic Movement in Nigeria has recently noticed some subtle campaigns of calumny against it by some faceless organisations under the cover of civil society groups. The first one called itself Coalition of Arewa CSO for Progress and Change, while the other one go by the acronym SERG, which describes itself as a pan Igbo group. While the former alleged that the Islamic Movement paid one Dr. Idris Ahmed a whopping N250m to discredit the military, the latter called for its designation as a terrorist group.

“Were it not that some people may misconstrue our silence over these spurious allegations as facts, we wouldn’t have bothered to join issues with these paid groups because we know where they are coming from and have clearly seen where they are heading to.

“The wild claim made by one Jacob Ogwuche, the National President of the so called Arewa Coalition that “Dr. Idris Ahmed and his CUPS organization is heavily funded by some categories of people,” including the “Islamic Movement of Nigeria,” is a compound lie devoid of any iota of truth whatsoever. We challenge him to publish the details of the so-called payments made by the Islamic Movement if it wasn’t merely a pigment of his imagination…

Yet Another Massive FreeZakzaky Protest in Abuja
24 August 2018
FreeZakzaky protests continued this week as well and a massive protest was organised in Nigerian Capital, Abuja. Following is the short clip of the protest, it was started from the National Mosque Abuja.

The Islamic Movement in Nigeria under the Leadership of Shaikh Ibraheem Zakzaky Zaria Chapter pays a courtesy visit to scholars in Zaria. Shaikh Abdulhameed Bello led the entrouge. The Movement undertakes such a visit during during Eid festivals with view of strenghening unity among Muslims.

In the course of the Visit, message of unity was sent to the scholars. In his short speech, Shaikh Abdulhameed Bello  representating the Movement stressed the need of unity among Muslims Ummah especially in todays world where seed of hatred and dichotomy among Muslims was sowed. He blamed the disunity among Muslims as the handiwork of the enemies of Islam used to tarnish the image of Islam which is known for peace and unity. He maintained that Muslims should Unite to face their real enemies. Malam Bashir Mai Diwani a scholar of Tijjaniyyah order expressed happiness for the visit where ee explained that a visit of this kind shaped his thoughts on the Unity of Islam today, and urged Muslims to Unite…

The Zaria Massacre
Published on 14 December 2015 – Ihrc TV
On al-Quds Day in July 2014, a unit of the Nigerian army opened fire on one of the 33 al-Quds Day demonstrations in Zaria, Nigeria. 40 were killed and many injured. This is the story of that day as uncovered by an IHRC team.

A Message On Nigeria From IHRC Chair
Published on 20 July 2018
Please Click on following link to watch and share Chairman of IHRC, Massoud Shadjareh’s video of 20 July on the plight of Sheikh. Please email us on wajahat@ihrc.org if you want a WhatsApp version.

CLICK HERE to read the interview of Ibrahim Musa, the President of Media Forum of the Islamic Movement in Nigeria. “Zaria massacre was orchestrated in Israel, bankrolled by Saudi, executed by Nigerian government”. Published on 10 July 2018