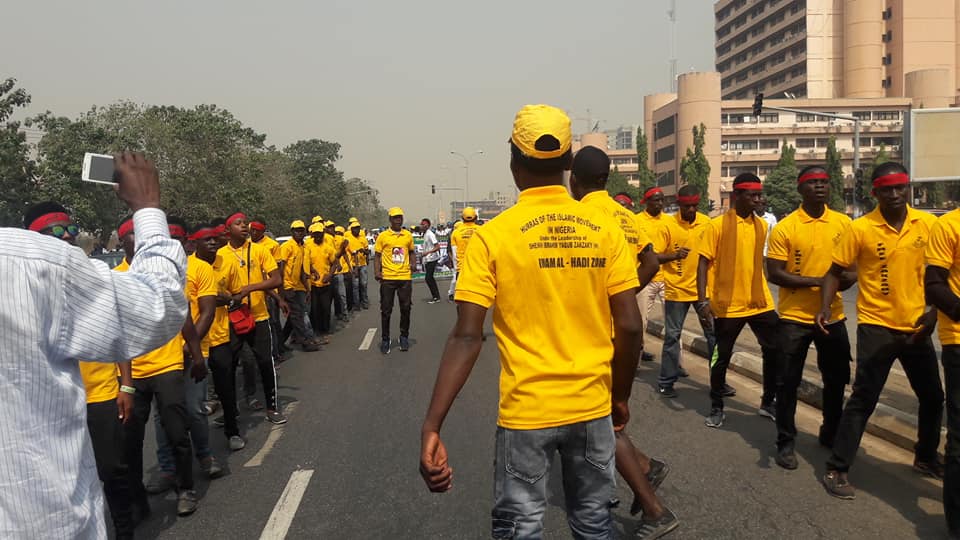 Below please find an update on the continuous Free Zakzaky protests. During the last week Kaduna High Court further adjourned the illegal trial of Sheikh Zakzaky to 25 March 2019.

It is exactly 1140 days since when Buhari administration incarcerated our Leader, Sheikh Ibraheem Yaqoub Zakzaky, for whom we have come out today demanding his unconditional release from illegal detention. We will not rest on our oars until and unless we achieve our aim, or we become martyrs in the path of Allah.
Also today, 791 days ago, a competent Abuja high court in its ruling ordered that Sheikh Zakzaky and his wife should be released with a N50M compensation be given to them because the government has denied them their fundamental human right, but Buhari’s government contemptuously flouted that landmark court order. Click here to read the full article.

The lingering trial of Sheikh Ibrahim El Zakzaky, the Leader of the Islamic Movement in Nigeria and his wife has commenced today (Thuesday) 22nd day of January, 2019 at the High Court of Kaduna State.
The court had earlier in November 2018 denied bail to the Defendants despite their visible ill health. However, at the hearing today, the Counsel for the Defendants Mr Femi Falana SAN, after highlighting the bad health conditions of the Defendants made a fresh application for the court to make an order for them to be flown abroad for medical treatment. Click here to read the full article.

The Kaduna State High Court four, presided by Justice Gideon Kurada has today Tuesday 22nd January, 2019, sits for the hearing on the substantive suit brought against the leader of the Islamic Movement in Nigeria, Sheikh Ibraheem Zakzaky and three others by the Kaduna State government.
During the hearing, Sheikh Ibraheem Zakzaky and his injured wife were presented at the court.
The lead Counsel of Sheikh Zakzaky, Femi Falana (SAN), told the court that Sheikh Zakzaky and his injured wife are in need of urgent medical attention of the injuries they sustained from the rain of bullets of the Nigerian Army in their residence. He said one eye of Sheikh Zakzaky was completely destroyed by bullets and the remaining one is also affected.
Chief Falana said, “The condition of the wife of Sheikh Zakzaky is even worst as there are multiple bullets that were lodged in her body during the brutal attack of December 14, 2015 which have not been extracted”.
In the long run, the Judge has pledged to deliver judgement on the application forwarded by the Counsel to Sheikh Zakzaky, to grant the Sheikh access to medical treatment abroad.
As acknowledged by the Counsel, “Government had failed to grant Sheikh Zakzaky proper medical attention he needed, following the pain and agony of the Army attack on 24th of December 2015”.
Eventually, the case was again adjourned to 25/03/2019. The trial as usual was held under tight security measures. Click here to read further details.

Free Zakzaky Massive Protest in Abuja on Monday the 21st of Jan 2019 from NUC building to the  Ministry of Justice. It was terminated at Federal Secretariat.

As court in Kaduna is preparing for the hearing of Sheikh Zakzaky’s case on Tuesday 22/01/2019, in a baseless charge  compiled before it by the Kaduna State government, multitude of brothers and sisters stormed the city on Monday the 21/01/2019, reiterating their calls for the immediate and unconditional release of the leader, his wife and several other faithful disciples in different security detentions cells for over 3 years.
The protest kicked off this afternoon around 4:00p.m. from Lagos Street, by Kano Road, Kaduna.
The protest which was lead by Brothers’ representative in Kaduna, Sheikh Aliyu Turmidhi marched peacefully chanting different slogans for the freedom of their leader.

Sisters Forum Of the Islamic Movement in Nigeria under the leadership of Sheikh Ibraheem Zakzaky condemned the Illegal arrest and detention of Marzieh Hashemi, an American Journalist, also an anchor at Press TV who was whisked away by U.S Govt. through it’s FBI.
The sisters called upon the American Government to release the Journalist unconditionally on Monday the 21st of Jan 2019 during a protest they staged in Abuja.

A massive #FreeZakzaky protest was organised in Nigerian capital Abuja on Thursday 17 January 2019, calling for the immediate and unconditional release of leader of the Islamic Movement in Nigeria, Sheikh Ibraheem Zakzaky, his wife and several other faithful followers in illegal detention for over 3 years.

The protesters as usual, marched chanting different slogans reiterating their demand for the freedom of their leader who had been in illegal detention for over 3 years despite a federal court ruling since December 2nd, 2016, where the court had finally ruled that, the Sheikh should be released within 45 days after acquitting him of any crime.

Multitude of brothers and sisters in the city of Kaduna have today Friday, 11/01/2018, staged fresh peaceful protest in the city heart of the state, calling for the immediate and unconditional release of leader of the Islamic Movement in Nigeria, Sheikh Ibraheem Zakzaky, his wife and several other faithful followers in illegal detention for over 3 years.
The protest kicked off this afternoon around 2:30p.m. in Leventis round about, along Ahmadu Bello way, Kaduna.
The protesters as usual, marched chanting different slogans reiterating their demand for the freedom of their leader who had been in illegal detention for over 3 years despite a federal court ruling since December 2nd, 2016, where the court had finally ruled that, the Sheikh should be released within 45 days after acquitting him of any crime.
The protest peacefully terminated along Kano road, a stone’s throw to 69 garage junction, T/Nupawa, Kaduna.