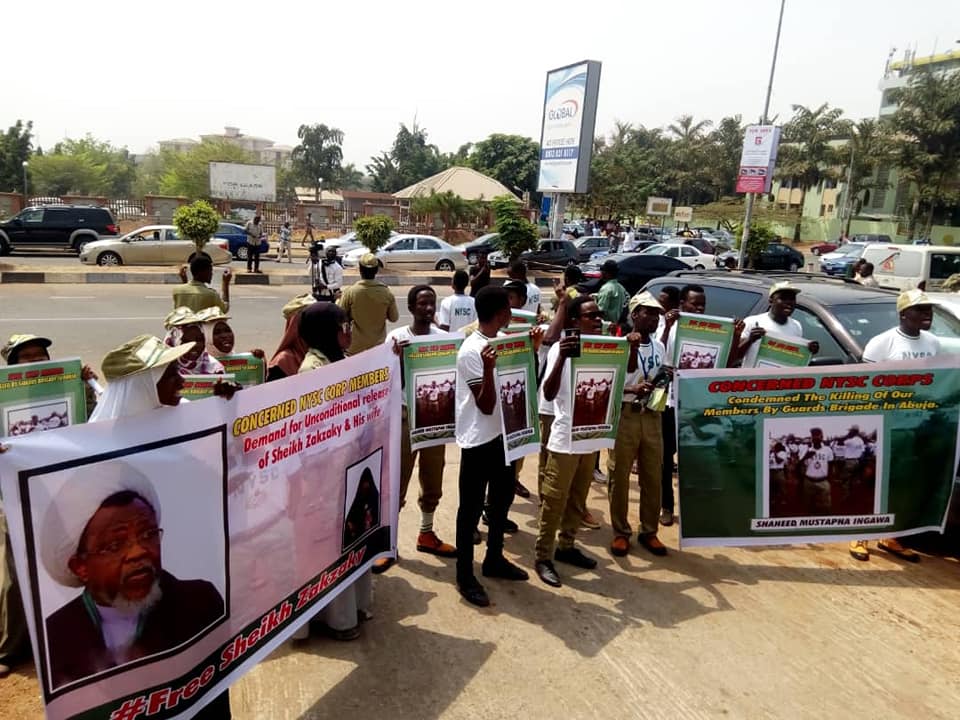 Below please find an update on the continuous Free Zakzaky protests. This week IHRC obtained a copy of a leaked letter exposing a plan to attack the Islamic movement ahead of general election.

Press Statement: Don’t Cause Violence In Our Name
08 February 2019

The Islamic Movement in Nigeria has received very credible reports that some unusual movements by certain unknown persons with dangerous weapons were sighted on Thursday, 07/02/2019 in some parts of Zaria, Kaduna state, especially around the Sabon gari area of the city.

It has become very urgent to alert the general public in view of the series of leaked memos from DSS and the Presidency falsely alleging that the Islamic Movement was planning to cause violence prior to next weeks general elections.

We wish to reiterate our already well known position that the Movement a total abhorrence to violence under any guise. We therefore wish to completely dissociate ourselves from any plots to cause chaos and confusion, which we believe the security agents are bent on staging, through a series of false flag operations, all in our name. Click here to read the press release.

This impression struck me on Tuesday, 5 February 2019, exactly a year that Sheikh Qasim Umar, a prominent disciple of Sheikh Zakzaky died of gun injuries he sustained on January 9, 2018 while calling the President Buhari-led administration to comply with a court order that calls for the release of the unjustly detained leader of the Islamic Movement in Nigeria, Sheikh Ibraheem Zakzaky. The context of the attack and the nature of the injuries later proved it as a premeditated one. Click here to read more

IHRC believes the letter is clear evidence that the government is weaponising the election and planning to use violence to manipulate the democratic process. By seeking to attack and trying to marginalise the Islamic Movement the Nigerian authorities hope to reduce its enormous influence over the voting public. The general election is due to be held on 19 February. Click here to read the press release.

Free Zakzaky Protest in Abuja on Tuesday the 5th of Feb 2019 and marking one year commemoration of the martyrdom of Sheikh Qasim Umar Sokoto. The protest terminated at Federal Secretariat.

Early last month, members of the Islamic Movement in Nigeria got hold of a secret circular written by the Department of State Service (DSS) dated 1st January, 2019 which was dispatched to all Service Chiefs, Inspector General of Police and heads of other security agencies urging them to take aggressive stance against us.

The letter read in part: “Intelligence availed to this service revealed plans by the leadership of IMN to mobilise its membership in large numbers for a massive protest and other hostile activities, including the use of explosives and firearms in the days ahead. It was gathered that the group intends to besiege some major Northern cities and towns in Kano, Kaduna, Sokoto and the Federal Capital Territory (FCT) for the planned attack.

“The planned attack is to be carried out in league with members of the Islamic State West Africa Province (ISWAP), some opposition elements and a section of human rights movement, with a view to providing massive violence and attracting the attention of the International Community ahead of the 2019 general election.”

We want to assure the general public and the international community that the allegation is malicious and unfounded, aimed at maligning the Movement with a view to painting it in bad light. There is no iota of truth in their claim, and it is just mere fabrication to justify the killing of members of the Movement ahead of February 16, Presidential election. Click here to read the complete press statement.

A group of core members of the National Youth Service Corpse (NYSC), who are faithful members of the Islamic Movement in Nigeria lead by Sheikh Ibraheem Zakzaky have marched to the office of National Human Rights Commission (NHRC), Abuja, Nigeria, on Thursday, the 31/01/2019, to express their concerned over the brutal killing of one of their core members, Mustapha Ingawa, who was killed by the Guards Brigade of National Police on 27th October, 2018 in the city of Abuja, while participating in a peaceful annual religious march.

In a paper submitted to the NHRC officials by a core member, Sulaiman Alhassan, acknowledged that, Mustapha Ingawa, is a graduate of B. Sc. Business Administration and until his death, he is a serving core member under National Youth Service Corps Scheme.