Home
Reports and Books
Once Upon a Hatred: Anti-Muslim Experiences in the USA 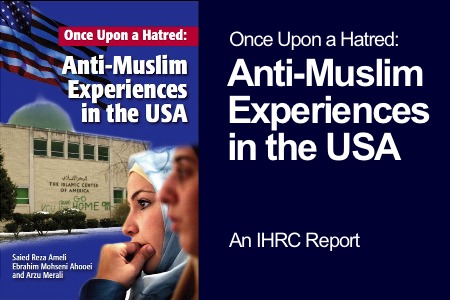 “Researching and documenting the impacts of Islamophobia on the Muslim community in the United States is a much needed critical first step, which in due time should bring broader awareness to civil society institutions and policy makers on how best to remedy the effects of racism and to move toward reclaiming the public arena for voices that speak and practice affirmative inclusiveness.  The current book is one more brick in an international effort directed at a data driven analysis of Islamophobia and its profound consequences on Muslims and society at large, and at UC Berkeley Islamophobia Research and Documentation Project we are heartened to see the quality and depth of analysis contained in the research.”

Dr. Hatem Bazian – Director, Islamophobia Research and Documentation Project of the Center for Race and Gender,  University of California, Berkeley

“This is an extraordinary study about the rise of Islamophobia in the USA. Theoretically sophisticated and methodologically rigorous, this study demonstrates with empirical evidence the Islamophobic realities Muslims live in the USA today. It is a must to read for anyone concerned with the dehumanization racism produces.”

“This groundbreaking study provides compelling quantifiable evidence demonstrating the alarming prevalence of hate crimes against Muslims in the USA, calling into question the existing policies to protect the victims of such crimes and begging the question of why such deep hate can be allowed to proliferate in what is presumed to be a highly educated democratic society.”

Yusef Progler, Professor of Comparative Societies and Cultures, Asia Pacific University, Japan, and co-creator of Multiversity, Malaysia and India.
“Racism is as American as apple pie. It is deeply embedded in American society beginning with the Holocaust committed against the native Amero-Indians and the black Africans who were violently uprooted from Africa and brought to America to serve as slaves for their white masters and traded as commodities. Churches preaching distorted Christian theology of hatred and the Zionist dominated media continue this tradition but, now, targeting the Muslims.

Anti-Muslim experiences in the United States and in Europe are the product of Western identification of Islam as the latest challenge to its neo-liberal capitalist ideology after the implosion of the Soviet Union and the marginalisation of Communist ideology. The United States’s war on terrorism is in practice a war on Islam.

IHRC and the authors must be congratulated for not only documenting the prevalence of hatred against Muslims but, importantly, making useful and practical suggestions for dealing with the problem. Policy makers in the US and Europe should study the report carefully and institute measures to curb the demonization of Muslims and Islam in the media. Muslim activism is needed to expose media falsification and distortion about the community and religion.

The recommendation for developing school curricula that address children from the earliest ages of schooling about the various cultures of the world and their contributions to all that is good is an excellent one which can easily be implemented by the education authorities.”

“This is a much needed publication about the rise of Islamophobia and its impact on American Muslims. It utilizes sound evidence, collected personally by professionally trained volunteers to amplify the narrative of hate crimes and hate incidents shaping our community’s reality now more than a decade post-9/11. It is an essential resource for academic and community advocates alike.”

Once Upon a Hatred: Anti-Muslim Experiences in the USA reveals the shocking statistic that 30% of Muslims surveyed have experienced a hate-motivated physical attack.  This stark figure is one of many statistics gleaned from a 1200 person survey undertaken in 2012 by IHRC, in California.  A staggering 88% reported negative experiences in everyday life, the media, political discourse and policy.  Whilst perceptions of the US as the model of religious freedom and tolerance attract many to its shores, the reality for Muslims is revealed here as anything but.

In addition to analysing the findings of the survey, the authors provide a historical and political context for the work they have undertaken.  This includes a thorough critique of ethnocentrism in academia and in the social sciences in particular.  They set this critique within the political history of the USA as a colonial enterprise from the time of Columbus through the founding of the USA until the present day.  Muslims, they find, are caught up in a cycle of demonisation and social and statutory targeting that is not new but part of the US’s very DNA when it comes to the treatment of people of colour within and without its shores.

The fact that this study took place in California – hailed as the most progressive US state in terms of both law and social practice – bodes ill for the nation as a whole.  This book culminates with a strong set of recommendations are targeted at distinct groups and many are sourced from previous works that speak to the same and similar challenges. They are addressed to Law and Policy Makers, the Media, Civil Society groups including Muslim groups and discuss: the Law; Media; Securitisation; Education and Community Work.   The recommendations look to previous specialised research, national commissions and the recommendations of Muslims from the survey, in the hope that a start can be made to transforming the situation.

Ibrahim Mohseni Ahooei is a senior researcher at the Cyberspace Research Policy Centre, University of Tehran