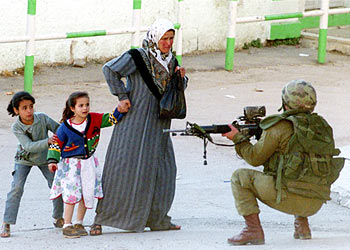 Mr. President first of all I would like to take this opportunity on behalf of Islamic Human Rights Commission to thank and congratulate the council on the report of the Special Rapporteur on the situation of human rights in the Palestinian territories occupied since 1967 and the recommendations that have been forwarded. Indeed they reflect many of our concerns:

First we believe that being a party to core human rights treaties; the Israel government has a legal obligation under international human rights and humanitarian law in relation to the rights of Palestinians to self determination and their right to establish an independent sovereign state with Jerusalem as capital.

Second we are also deeply concerned about the grave human rights and humanitarian violations in the West Bank and Gaza by Israeli Defence forces between December 2008 and January 2009. During this period the vast majority of those Palestinians killed were civilians. The Israeli government claimed, it was taking all possible measures to minimize civilian harm but the facts reveals systematic, egregious violations of laws of war and international human rights law. Thus the patterns of Israeli attacks in Gaza cannot be explained as mere accidents but the seriousness of the consequences indicate the commission of war crimes. It seems that Israel is trying to punish civilians in the form of collective punishment against 1.5 million civilian populations in Gaza. Moreover, the pre-existing blockade of Gaza which prohibits the movement of Palestinians and of goods from or into Gaza is in massive violation of its obligation under the Fourth Geneva Convention.