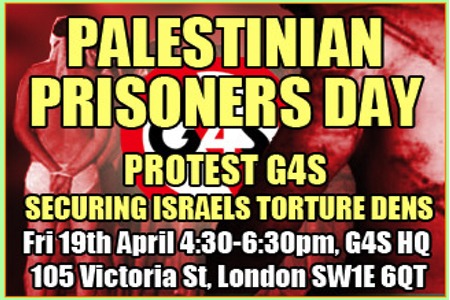 As part of Palestinian Prisoners Day commemoration we will be protesting alongside InMinds outside G4S HQ in London 19 April from 4:30pm to 6:30pm, please join us.

British-Danish security firm G4S has along history of working hand in hand with the Israeli Prison Service to help secure its prisons and interrogation centres where Palestinian political prisoners, including children, are tortured and caged.

Just last month on 23rd February Arafat Jaradat, a Palestinian father of two, was tortured to death in G4S secured facilities – he died in Megiddo prison following several days of torture in al-Jalame interrogation centre. At Megiddo the whole central command room is provided by G4S, which also provides security systems for the notorious al-Jalame interrogation centre in northern Israel with its infamous Cell 36 where Defence for Children International reported children are locked in small filthy cells in solitary confinement, some for 65 days, with their only escape being the interrogation room where they are shackled by their hands and feet to a chair whilst being abused, sometimes for hours.

Administrative detainees, who are held indefinitely without charge or trial, are also caged in G4S secured prisons such as Ofer in the occupied territory where G4S provides the perimeter defense system and the central command control room for the entire facility. Addameer the Palestinian prisoners support group in Palestine has requested that activists around the world campaign and expose this inhumane practice of Administrative detention as part of this years Palestinian Prisoners Day activities.

Former prisoner Shireen Issawi, the sister of the hunger striker Samer Issawi who himself was was held in Ofer prison before being moved to hospital as his health deteriorated has asked activists to “Deliver the voice of the oppressed prisoners and hold this company G4S accountable for its responsibility towards these risoners and its partnership to the occupation in its inhumane practices. It must stop providing these supplies to the occupation… Freedom for our prisoners; for our heroes”

For further information, you can visit the InMinds site –