Plight of the Roma Muslims in Bulgaria

Home
Uncategorized
Plight of the Roma Muslims in Bulgaria 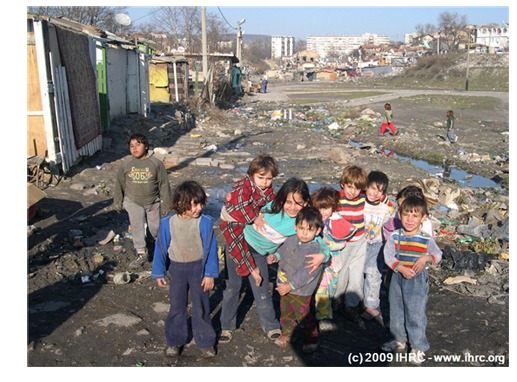 Facebook
Twitter
LinkedIn
WhatsApp
Email
“You killers don’t come near me… go to hell all of you…” the strident curses of Nefize echoed among the poverty stricken houses of Trosheva, when I visited them on November 11, 2009.  Nefize, the grandmother of Atahacoba family, thought that I was a Bulgarian; she was thus angry and hostile towards me and my local guide. She continued her outburst until the neighbours explained that I was there to help. I was commissioned by the UK-based Islamic Human Rights Commission (IHRC) to visit Varna as a follow-up to my previous visit to assess the human rights violations of the Roma Muslims.

I learnt of the plight of the Atahacoba family, a Muslim Roma family that has been victimized by the deeply ingrained racist and anti-Islamic attitude of the Bulgarian political and social system. In 2008, the family house where they had lived for almost 25 years was demolished by the city council. Despite an ongoing court hearing to stop the demolition, it still went ahead.

The police forcibly evicted the 16-member Atahacoba family and dumped them on the street. One was a nine-month-old baby that died of shock from the severe cold that day. The case was taken to court. The local court acquitted the City Council on the grounds that Ridvan Saly, head of local NGO, was not entitled to represent them. Ridvan Saly told me that he was not surprised by the court’s verdict. While showing me the papers in his small office, he averred “these kinds of discriminatory and unjust decisions are not uncommon in the Bulgarian legal system; I had all the proper documents to represent the family in court.”

Now the family is struggling to survive in their tiny primitive shack, without a toilet, bathroom, or running water, thus forcing them to bathe in the sea. When she had calmed down, Nefize told me that the children had nothing to eat. However, despite all the hardships, Nefize did not waiver in her reliance on Allah (Â) and gratefulness to Him. When we handed some food and blankets to the family on behalf of IHRC she said “I knew this; I have been asking Allah (Â) to help us and He did. He never leaves my prayers unanswered.”

In January 2008, when I first visited Kosova, a suburb of Varna populated overwhelmingly by Roma Muslims, I had to walk down a muddy and filthy road leading to the neighbourhood. There were flimsy shacks which were used to house families. It was evident that lack of hygiene was a major problem in the area. The children played in the rubbish and quickly became infected with diseases. According to the locals’ testimony, infant deaths were high and there was a high rate of cancer among adults.

Mehmet, who is in his early 30s, lives with his wife and four children, in a tiny shack with a big hole just above the window that he tried to cover with plastic. There was a very old furnace inside the shack and they could use it only if they found something to burn from the wasteland outside. His brother and father had died of cancer. He himself suffers from cancer as well but he does not receive the appropriate treatment.

Another shocking case was that of 25-year-old Tomka. She lives in a seven-square meter shack along with her two babies and husband, who collects food from the dump to provide for children. She said “we first taste the food and if it tastes good we let the children eat it, otherwise we do not.”

The root cause of this terrible situation was made clear to me when I visited the council and was given the name of one Ivan Tsankov, ‘Chief Expert in Ethnic and Demographic Affairs’. I asked him why the Roma were living in such conditions. He replied with a question, “Is it not normal for Roma to live in a dump?” This racist attitude was evident throughout our conversation.

Anti-Islamic sentiment in Bulgarian society dates back to the time of Ottoman rule in the Balkans which lasted 500 years. After independence, the founders of Bulgaria redefined the people and places that comprised the land in an effort to create their nation-state. During this process, Islam came to be regarded as a strong reminder of Ottoman “occupation”, while Muslims became the “others”, to be either expunged or exiled.

The ideals of the nationalism project were adopted by the communist party in their suppression of the Muslim minority.  In 1974, with a wave of assimilation campaigns, the Muslim Roma were forced to abandon Muslim names and adopt Christian-Slavic names, similar to the experience of Turks and Pomaks. They were also forbidden to observe Muslim customs and celebrations in an attempt to strip them of their Islamic identity.

Although I was there for a short time to be able to form a definite conclusion, the indications of double discrimination were evident everywhere when I visited Varna. As acknowledged in the 2001 Durban Conference Declaration, paragraph 2; when racism is combined with “sex, language, religion… victims can suffer multiple or aggravated forms of discrimination.” In this regard, despite the fact that they also suffered discrimination and racism, Christian Roma were better off than Muslim Roma. They had better housing, better living conditions, better job prospects and indeed better reputation. It was clear that due to their common religion, Bulgarians empathize more with the Christian than Muslim Roma.

On the other hand, feelings of isolation have led Muslim Roma to seek new associations or revive past memories: the influence of Turkish popular culture was impossible to ignore in the Muslim Roma ghettos of Varna. Despite their poverty, Roma make sure they have TVs and satellite receivers which connect them to Turkish people. They believed that they have a common ground with Turkish Muslims with whom they also share a common language. With the help of technology they hope to escape from the effects of brutality and link themselves to an “imagined community” as Benedict Anderson (1983) terms it, in which they have a sense of belonging despite their physical isolation. This connection was so significant that even little kids, whom I met in the streets of the Roma ghetto, after a brief conversation between us, could recognize my Turkish accent and identify me as someone who is from Turkey.

As an alternative to the self-association of Muslim Roma with Turkish popular culture, I also saw a more radical approach to the issue. Some Muslim Roma who seemed to be overwhelmed by the magnitude of ongoing discrimination and poverty, decided to take a radical step and convert to Christianity, thanks to the significant activity of US missionary evangelical organizations. Thus, as a few ex-Muslim converts explained to me, they were given a slightly better but definitely not positive recognition after their conversion.

No organized or long term support has been made available to the Muslim Roma community in Varna, and it was difficult to believe that their tragedy was taking place within the borders of the EU. Instead of improving the plight of Roma, the EU squanders billions of euros of tax payers’ money to support Israeli atrocities and ethnic cleansing of Palestinians. The EU recently an-nounced that it had given many lucrative research contracts to Israeli companies, such as Motorola Israel (producer of “virtual fences” around Israeli settlements) and Elbit Systems (responsible for building some parts of the apartheid separation wall).

Regarding the Acotohaba family, proving again Ridvan’s contention, on December 11, 2009 the high court upheld the discriminatory decision of the local court. While IHRC is now taking steps to challenge the decision of the Bulgarian courts at the ECtHR, lack of hope and uncertainty continue to characterise the bitter everyday life of the Muslim Roma of Varna.

Or can be downloaded from the reports page: DOWNLOAD