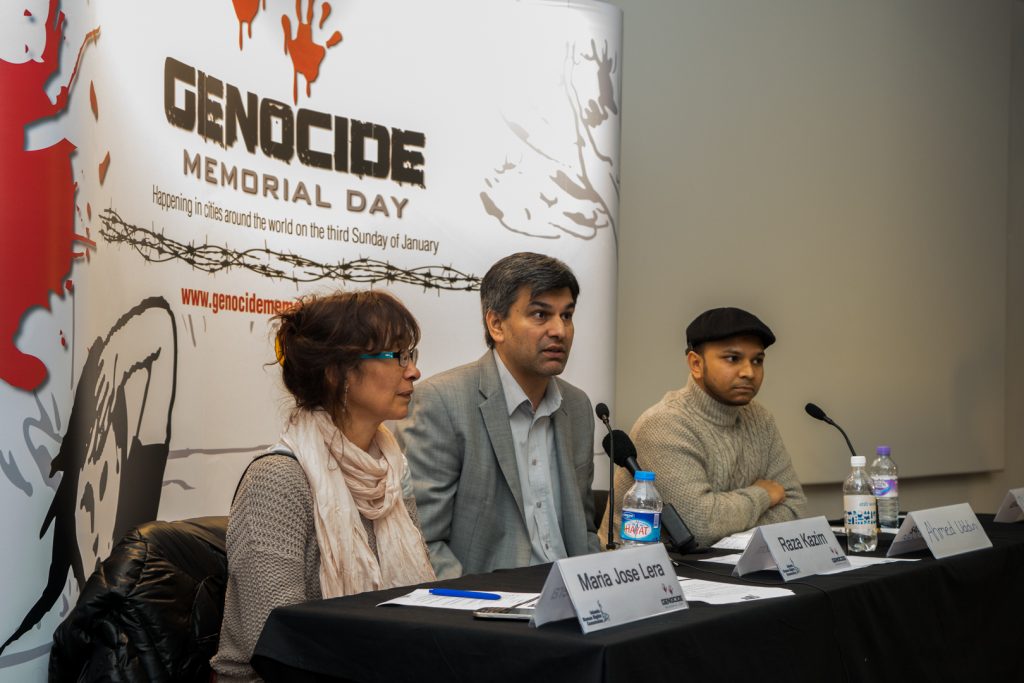 Hundreds of people in cities across Europe marked 2015 Genocide Memorial Day over the weekend to commemorate man’s inhumanity to man and learn how to identify and help prevent the outbreak of future crises.

More than 100 people attended the London event organised by IHRC, with the conference opening up with a message of solidarity from Sandew Hira at the corresponding event in Amsterdam expressing the importance of holding this conference at a time when Muslims across Europe are being ‘otherised’ to serve political and racist agendas. Hira was joined from Paris by activists who made a live statement to the London conference via video link explaining that their own planned commemoration had been overtaken by the urgent need to make a “counter-attack” against the wave of Islamophobia and racism currently sweeping France and which is increasingly defining the nature of French nationalism.

Maria Lera, an academic from Seville, Spain, made a fascinating contribution about the treatment of Muslims and Jews in the Christian conquest of Andalucia and its parallels with the Holocaust in 1930s and 1940s Nazi Germany and Europe. The questions and answers session following her presentation explored the complexities of whiteness and how colonialism and neo-colonialism defines according to its own interests those who are inside the club of whiteness and those who are ‘othered’ so as to, in the words of Franz Fanon, place them into the zone of non-being to facilitate genocidical acts and genocide against them.

Rabbi Cohen from the anti-Zionist Jewish group Neturei Karta explained that the Zionist state of Israel is far from what Orthodox Jews consider to be a legitimate state according Jewish scripture, and its injustices are graphically expressed in the genocidal acts against the occupied and oppressed Palestinian people. A separate event is planned for Jerusalem in February.

Rabbi Cohen was followed by the writer, journalist and blogger Matt Carr. Carr emphasised the value of using history as an analytical tool and drawing parallels with the present day. This was clearly expressed in his discussion of the oppression of the Morisco peoples in post Islamic Andalucia who were harassed and forced to assimilate before eventually being expelled from Spain.

Law graduate and writer Xain Storey made a profound statement on the genocide against First Nation peoples in North America. Describing the facades of freedom and liberation the USA and Canada uphold, Storey explained that they were nothing more than falsehoods. Both nations were built on the bones of millions of indigenous peoples. The systematic oppression against them occurs to this day.

IHRC chair Massoud Shadjareh attacked the British Home Secretary Theresa May for singling out anti-semitism in recent remarks which failed, to make the connection between anti-semitism, Islamophobia, rising racism and the war on terror: “You can’t eradicate anti semitism without eradicating islamophobia and you cannot eradicate islamophobia without tackling the rise of extreme right fascism which is not only rife in society but also in your own Tory party.”