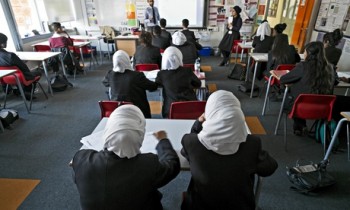 The failure of an OFSTED investigation to find anything approaching a ‘smoking gun’ into an alleged plot by hardline Muslims to take over some Birmingham schools does not come as any surprise in a row dominated by prejudices rather than principles.

The decision to place some schools under special measures, the investigations and the manner in which they were conducted represents an orchestrated political attack on the whole community, its religious freedoms and their place in British society as equal citizens.

It is hard to imagine any other circumstances in which a letter directed against a certain community, undated, unsigned, described as “almost certainly spurious” by Mark Rogers, the chief executive of Birmingham City Council, would merit any serious interest. However so febrile is the prevailing climate of hostility to Muslims in the UK that the document has elicited four separate investigations by the Council, Dept for Education (DfE) and OFSTED.

Practices such as playing the call to prayer over loudspeakers and posters asking pupils to begin lessons with a prayer have been blown up into examples of Islamic extremism, ignoring the fact that many majority Christian schools in the UK require their pupils to conform to similar Christian rituals and values. There is no doubt that the aggressive inquisition against these schools will be seen in the Muslim community as ‘one rule for us and another for everyone else’.

Leaks to the media about the progress of the investigations have confirmed Muslim suspicions that a coordinated campaign is afoot to nip the perceived problem of majority-Muslim governing boards in the bud. Placing some of the schools under ‘special measures’ is a stratagem employed solely to allow the government to remove governors from their posts.