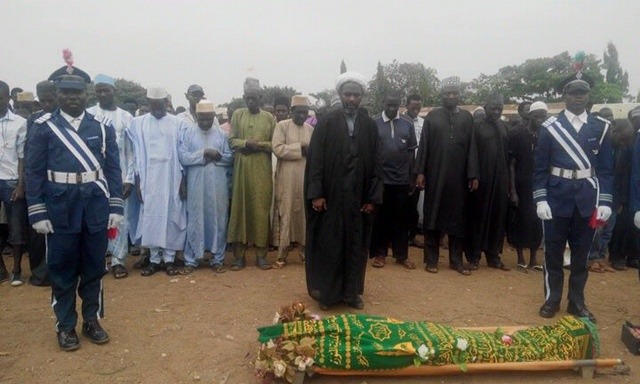 IHRC condemns the weekend killing by Nigerian soldiers of another member of the country’s Islamic Movement.

Umar Haruna was killed and four of his colleagues injured when soldiers opened fire on them after asking them for directions in Zango, a town located in the Tudun Wada area of the northern state of Kaduna.

According to an eye-witness account soldiers had enquired about the location of a road. When one of the five replied that there was no such road the soldiers asked him to follow them, raising protests from his colleagues. In response the soldiers opened fire with live ammunition. Umar was hit in the chest and died instantly while the other four were taken to hospital for treatment.

The attack took place outside a centre belonging to Nigeria’s Islamic Movement, to which all five victims belong. The movement enjoys widespread support in Nigeria and is led by the charismatic Sheikh Muallim Zakzaky. Local reports suggest that since Sunday’s incident soldiers have begun to surround the Sheikh’s home in the town of Zaria. The sheikh is a fierce critic of political corruption as well as the so-called Boko Haram movement.

Sunday’s attack is the latest in a recent series by the army targeting the Movement and particularly its leadership. On Friday 25 July, soldiers opened fire on a peaceful demonstration organised by the Islamic Movement in support of the Palestinians. A total of 32 people were killed, with some dying in custody after being savagely beaten. At least two more civilians were killed the next day in a similar attack on the funeral preparations.

An IHRC fact-finding team dispatched to Nigeria also found evidence that many of those arrested died in military custody. Findings indicated that demonstrators were taken into detention alive and well and later emerged dead with signs of torture on their bodies. Others who were injured were detained for hours and brutalised before being allowed to seek medical treatment. Among those killed were three sons of Sheikh Zakzaky.

IHRC’s report into the massacre concluded that a section of Nigeria’s powerful military is out of control, committing murder and extra-judicial assassinations with apparent impunity.

IHRC chair Massoud Shadjareh said: “Nigeria’s military is out of control. Such extrajudicial killings are becoming more common, and appear to be a tool to silence critique. The international community needs to call on the Nigerian government to rein in its armed forces, and ensure that such killings and intimidation cease.”

IHRC’s report into the Zaria massacre is available to read at https://ihrc.org.uk/publications/reports/11219-nigeria-report-the-zaria-massacres-and-the-role-of-the-military