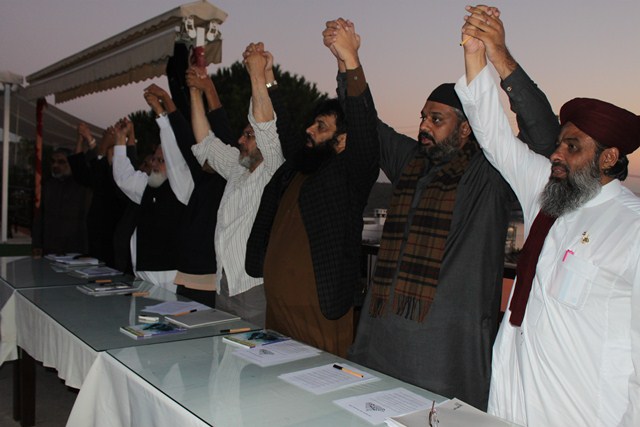 Muslim scholars from Pakistan have signed a historic agreement condemning sectarianism and vowing to remove it as a cause of conflict in the violence-stricken country.

Meeting in the Turkish seaside resort of Bodrum the scholars, who represent all of Pakistan’s major Islamic sects and tendencies, agreed to come together to tackle religious intolerance in the interests of Muslim unity.

The 11-point UJN Pakistan Unity Declaration commits the signatories and the UJN to sign statements in the upcoming Islamic month of Muharram denouncing the killing of fellow human beings on the basis of colour, creed, ethnicity or religion as haram. The statements will also declare excommunication or takfir against fellow Muslims and abusing the Prophet Muhammad’s family and companions to against the Shariah.

The accord is based on Charter 3:103, initiated by the Islamic Human Rights Commission in 1997 and since adopted by scores of Muslim organisations, which calls for Muslims to be united in accordance with the 103rd verse of the third chapter of the Holy Quran.

It also addresses the challenging problem of madrasas in Pakistan, believed to be a breeding ground of intolerance, recommending that syllabuses and curriculums address the need for respect, harmony and peace between all members of Pakistani society.

“The signing of the declaration is a determined step out of the quagmire of murder and fear that has come to characterise the landscape in Pakistan.  The situation of sectarian killings and intimidation that has worsened year on year has been dealt a blow by the unity shown today.”

“The dream for many that the inception of Pakistan once was had become a nightmare.  Today’s events bring back hope that one day Pakistan can put the internecine strife of the current era behind it.”

The declaration is attached to this press release.

Photos of the signing ceremony can be found here.

A video of the of signing can be accessed here.

For more information please contact either of the UJN Secretariats below: