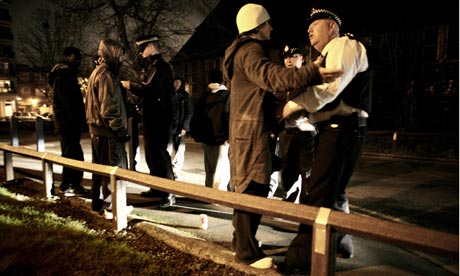 Massoud Shadjareh, the Chairman of the Islamic Human Rights Commission, said today that the Home Office’s latest figures on numbers of people stopped and searched under anti-terrorism legislation fail to give the full picture when it comes to Muslim concerns about the discriminatory use of the powers to target Muslims in particular.

Shadjareh, who sits on the National Police Authority’s Stop and Search Community Panel and the Association of Chief Police Officer’s Schedule 7 National Accountability Board, was speaking after the Home Office released figures of arrests, convictions and other outcomes under the anti-terror legislation for year ending May 2010 (see http://rds.homeoffice.gov.uk/rds/stats-release.html).

“Unfortunately the figures on stop-and-search released by the Home Office this morning are very limited in their scope, and fail to address suspicions of systematic Islamophobia and anti-Muslim discrimination.

“It is very disappointing that these crucial figures about how the security agencies deal with large numbers of people who are totally innocent, and have given no grounds for suspicion, are presented as a minor addendum at the end of a 48-page document giving much more detail about the relatively small number of people actually arrested for or convicted of terrorist-related offences.

“The treatment of nearly 200,000 people arrested under Stop-and Search provisions of different kinds need to be taken much more seriously. Accounts we have received from members of the community who have been stopped under these provisions, and sometimes subjected to quite appalling behaviour, raise serious issues that these figures do not address.

“The failure to provide any detailed breakdowns on figures on Schedule 7 stops, under which people can be held and questioned for up to nine hours, and can be imprisoned for up to 3 months for failure to answer questions, is particularly worrying. The government must have these figures; the fact that they choose not to disclose them makes it difficult to analyse the effectiveness of the measure, and raises questions about their intentions.

“The reality is that although the total number of people stopped may include members of all communities, it is clear that some ethnic groups are still being disproportionately targeted. Even these figures hide the fact that the numbers of Muslims in particular are still being singled out, not only for searching, but also for more detailed interrogation and being detained for up to the maximum period allowed.

“Muslims are also concerned about the attitude of many police officers carrying out the stops, who seem to assume guilt rather than innocence on the part of Muslims, and the sorts of questions that are often asked. Security issues do not require people to say what mosques they attend or whether they have ever visited particular countries, for example.

“It is also a matter of concern is that fingerprints and DNA are taken from some of those stopped and detained, even though they have been stopped at random rather than on the basis of any supposed grounds for suspicion, and are not even under arrest, let alone charged with anything.

“And it is particularly worrying when, after a long period off detention and questioning that is often perceived as hostile, young people are then asked whether they want to work for the security services as informers in the community. Such questions are often taken as carrying an implied threat as to the consequences should the individual not wish to be recruited in this way.

“In the last few days , we have seen welcome scepticism about unnecessary airport security procedures from Martin Broughton and others in the airline industry. Now we need a similarly sceptical and practical examination of stop-and-search procedures that supposedly form a key element of this country’s security provisions, but are clearly shown by these figures to be irrelevant and useless, as well as a waste of money and resources.

“We call on the government to face up to the real concerns that the increasing disproportionality of stop-and-search is doing nothing to tackle real criminality, but is targeting and criminalising communities that is already suffering alienation and discrimination.”

This is not spam. You’re receiving this email because you or someone else subscribed to the IHRC Press Mailing List using this address. Not interested anymore? To unsubscribe, send an email from this address to unsubscribe@ihrc.org.