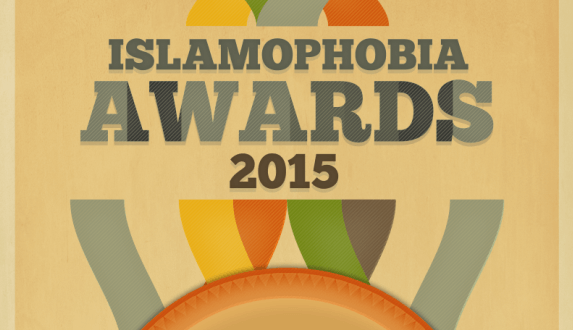 The annual Islamophobia awards have come to be known as a tongue in cheek swipe at those in public life who have perpetrated or perpetuated acts of hatred against Muslims and their faith.

However apart from subverting the stereotype of Muslims as angry and fun-hating religious fanatics, the awards have a serious aspect in that they also recognise the efforts of individuals and groups who have striven to combat Islamophobia.

There are four winners this year:

Imam Achmad Cassiem – A veteran of the anti-Apartheid struggle in South Africa, Imam Cassiem is a veteran campaigner against racism and Islamophobia. He joined the armed struggle against the oppressive apartheid regime as a 15 year-old boy and at the age of 17 became one of the youngest people to be imprisoned on Robben Island alongside Nelson Mandela. Today, Achmad Cassiem is an Imam and Founder of the Islamic Unity Convention in South Africa and a tireless campaigner against Islamophobia on a national and international level.

Abdel-Rahmène Azzouzi – Professor Azzouzi is a councillor in the French city of Angers. Earlier this year he decided to stand down from his position in protest at the rampant Islamophobia in his country. He announced his decision in a frank open letter published widely in France in which he described French secularism as a weapon used to attack Muslims. Azzouzi decried the Islamophobic policies of the state saying that they risked making France the most Islamophobic nation in the world.

Arun Kundnani – One of the country’s leading authorities on Islamophobia, Kundnani has unpicked the raft of anti-terror laws and policies enacted since the turn of the millenium and analysed their impact on Muslims. In 2014 his new book ‘The Muslims are Coming: Islamophobia, Extremism and the Domestic War on Terror’ was published to great acclaim. Based on several years of research and reportage in the UK and US, the book is the first comprehensive critique of counter-radicalisation strategies, an area in which Kundnani has developed an unrivalled expertise.

Community of Cold Lake, Canada – When the local mosque in Cold Lake, Alberta was vandalised last year the non-Muslim community rallied round to help their Muslim neighbours clean up and repair the damage. Islamophobes had attacked the mosque overnight spraying messages such as “Go home” on the building. After Friday prayers volunteers cleaned up the graffiti and removed the racist scrawlings. Some even taped messages like “You Are Home” and “Love Your Neighbour” on the mosque windows to show their support. The response was a perfect demonstration of a community coming together to oppose bigotry and Islamophobia. It set off a trend whereby local communities rally round to offer their support to the victims after such incidents.

The Islamophobia Awards will be held at the Holiday Inn, Wembley, Park, London on Saturday 7 March at 6pm

Press wanting to cover the event should register by contacting nadia@ihrc.org or call +44 208 904 4222 – camera crews must arrive by 6.15pm at the latest and please make clear if you need space for a fixed camera.