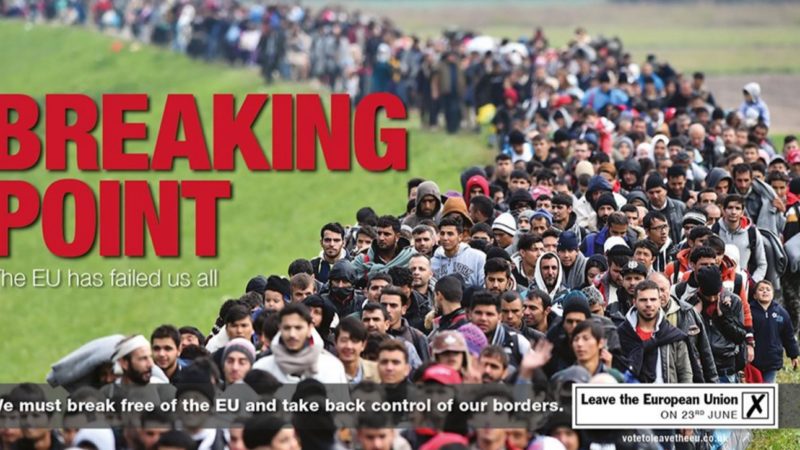 The resignation of a leading member of the Leave campaign in this week’s EU referendum over anti-Muslim tweets she passed on is a frightening reminder of the hate-filled political climate that prevails in Britain today.

Arabella Arkwright, a businesswoman who sat on the board and finance committee of Vote Leave, was forced to resign after details of her Twitter activities were exposed in the media.

They included an image of a white girl in the middle of a group of people wearing burqas saying: “Britain 2050: why didn’t you stop them Grandad?” and a link from Tommy Robinson, the founder of the far right English Defence League, suggesting UK Muslims were trying to build an Islamic state in Britain.

The fact that such a high-ranking member of the Leave campaign has chosen to engage publicly in such repugnantly Islamophobic chatter is illustrative of the environment of hate that governs the perception and treatment of minorities.

Indeed it should be a matter of grave concern to everyone that hate speech vis a vis minorities has become so socially acceptable that the likes of Arkwright do not even see the need to dress up their xenophobic tropes before peddling them.

We note that although Arkwright has sought to distance herself from the retweets by saying that by passing them on she was not endorsing them in any way, she has not apologised. She owes it to the people of Britain to apologise to them for her behaviour.

IHRC has long warned of the extreme undercurrent of xenophobic intolerance that finds expression in everyday political discourse and practice. Britain is today characterised by a ‘hate environment’ that has been deliberately whipped up by the media, politicans and the commentariat, the purpose of which is to ‘otherise’ minorities and scapegoat them for the failures of the political class.

So whether it is David Cameron suggesting that British Muslims “quietly condone” extremism, who “don’t go as far as advocating violence, but who do buy into some of these prejudices…” in order to justify discriminatory and oppressive policies against them, or Arabella Arkwright propagating anti-Muslim stereotypes, the Islamophobic message is the same: Muslims are disloyal, treacherous, violent, extremist and anti-western.

IHRC chair Massoud Shadjareh said: “Arkwright’s tweets highlight just how far our political culture has descended into xenophobic extremism. We have to roll back this poisonous environment of hate by challenging and defeating the assumptions on which it is built, not pandering to it or indulging in it as mainstream politicians are doing.”