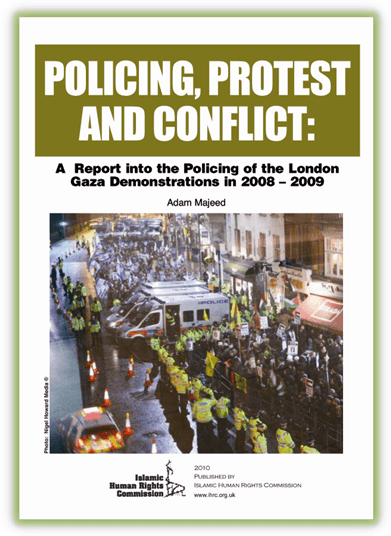 Islamic Human Rights Commission (IHRC) is launching a report, Wednesday 3 February, on the policing of the demonstrations held in London end 2008 / early 2009 in protest at the 22 Day War against Gaza.

The report uses eyewitness statements and photographs to provide an overview of police behaviour.

The report comes at a time when many if not all complaints against the police have been sidelined or dismissed.  Nevertheless, some 71 protestors have been charged with violent disorder offences, and face sentences, if found guilty, of up to 5 years.  Those charged were not arrested at protests but during a series of dawn raids.

There is serious disparity between the lack of accountability for police actions, and the pursuit of these protestors.

“We are seeing protestors, some as young as 12, being charged with very serious public order offences, whilst police officers against whom there are credible cases for assault and discrimination have been exonerated.  In most cases of police officers, neither an investigation occurs nor is a disciplinary procedure enacted.  This is unacceptable, and deeply offensive to any sense of justice.”

Concerns highlighted in the report are many, including:

        kettling protestors;
        the use of unnecessary and brute force;
        discriminatory treatment of Muslim protestors and protestors perceived to be Muslim;
        the role and function of forward intelligence teams (FITs);
        harassment of press and freelance photographers;
        arbitrary handling of the laws;
        role and relationship of the Metropolitan Police Service and the CST.

“The police exercise a legitimate function in protecting the collective
community; however, the incidences used as examples in this report undermine that legitimacy in the eyes of many and are counterproductive for police – communities’ relations, and simply prove antagonistic to the peaceful facilitation of protests.”

IHRC makes a series of recommendations in the report to police and relevant authorities, including:

        reconsidering the tactic of corralling or ‘kettling’, which continues to challenge the right to liberty and security enshrined in International and European instruments.
        adopting a strategy that offers a graded ‘tactical’ profile. Such a strategy should be designed for the peaceful facilitation of protest.
        the development of ‘dynamic risk assessments’
        the police service should inform themselves of the cultural standards of crowds and of the  genuine goals that will run from these standards. IHRC maintains that equality should be the seminal determining factor in dealing with the minority and majority communities.
        IHRC calls for clarification into the role and function of forward intelligence teams (FITs).

A full set of recommendations follow the body of this text.

RECOMMENDATIONS
From
POLICING, PROTEST AND CONFLICT: A REPORT INTO THE POLICING
OF THE LONDON GAZA DEMONSTRATIONS IN 2008 – 2009, pp41 – 42

IHRC recommends that the police service adopt and implement ‘Adapting for Protest’.  The HMCIC submission represents an attempt to clarify the legal framework and create a strategy ‘…anchored in public consent…’.  However, IHRC urges the police service to seriously reconsider the tactic of corralling or ‘kettling’, which continues to challenge the right to liberty and security enshrined in International and European instruments.

IHRC urges the police service to adopt a strategy that offers a graded ‘tactical’ profile.  Such a strategy should be designed for the peaceful facilitation of protest.  This would include scope for self-policing, ‘dynamic risk assessment’, communication and dialogue with participants before, during and after collective gatherings.  Such an approach would serve to enhance perceptions of police legitimacy and reduce incidence of intimidation.

IHRC recommends that the police service develop and implement a use of force continuum with a strong presumption on minimum force.  Progression across the continuum should only occur when absolutely necessary and with the full knowledge of crowd participants.  However, such a scale needs to avoid unwarranted prescription, and instead aim to strike the right balance between the conflict resolution model and a continuum outright.  It is vital that when police decide to engage with such a continuum, they do so with the full understanding of crowd participants.  As part of a graded ‘tactical’ profile and subject to ‘dynamic risk assessment’, MPS officials will need to clearly enunciate their intentions when shifting across the continuum.  In doing this, MPS officials must fully justify their actions to crowd participants.  Achieving this balance would reduce incidence of undifferentiated and indiscriminate force.

IHRC calls for transparency and accountability from holders of public office.  IHRC urges a full and thorough investigation into events leading up to and including events that took place in the Hyde Park underpass on 3 January 2009.

IHRC calls on the police service to redress any implicit or explicit institutionalised bias towards members of the Muslim community, supporters of the Palestinian cause and other minority and majority groups.  IHRC recommends that the police service inform themselves of the cultural standards of crowds and of the genuine goals that will run from these standards.  IHRC maintains that equality should be the seminal determining factor in dealing with the minority and majority communities.

IHRC calls for clarification into the role and function of forward intelligence teams.  FITs continue to pose a challenge to the facilitation of peaceful protests.  They also continue to draw criticism for their intimidatory presence and dubious tactics.  The police exercise a legitimate function in protecting the collective community; however, such overt utilisation of FITs only proves antagonistic to the peaceful facilitation of protests.

IHRC urges that police service officials are made fully aware of the nature and scope of their powers.  Police misuse of statutory and common law powers is of high incidence and serves to damage perceptions of police legitimacy.  It is a concern that these powers are being selectively used on various groups, and safeguards should be introduced to prevent further incidence.

IHRC calls on MPS officials to abandon the harassment of press and freelance photographers.  Photographers, in conducting their legitimate business, play an important role for civil society and such a role should not be viewed as an impediment.  Senior officers at the ACPO have been unequivocal on this matter, however, on the operational front, incidents are still reported.

IHRC recommends that the police service reassess their role and relationship with the CST.  The CST does not draw comprehensive support from the Jewish community, and so, cannot be said to represent the community.  With their emphasis on ‘physical security’, they continue to project themselves in an antagonistic and aggressive manner.

IHRC draws attention to the importance of pre-demonstration briefing.  Officers called upon to police demonstrations should be briefed under a harmonised aggregate of values related to the peaceful facilitation of protests.  Such values should operate under the human rights framework with particular regard to freedom of expression and freedom of peaceful assembly.  Officers should be mindful that in their official capacity, they should place any prejudices or indifferences (to causes, particular groups or persuasions) aside for the sole purpose of facilitating a peaceful protest.  The necessary risk assessment prior to a demonstration should not be static.  There should never be a preconceived assumption that certain groups will behave in a particular way, as this will inevitably prove counterproductive. Furthermore, while addressing the pre-demonstration risk assessment, the influence of external factors should be limited.  There should be no undue influence or exceptional relationships with any groups (for example, the CST) while assessing potential risks.  All external influences that impact on the pre-demonstration risk assessment process should be in the public domain.

IHRC recommends the issuance of a definite internalised structure of command and control and other safeguards to prevent incidence of MPS officials sans shoulder badges.  By agitating crowd participants, these officers operate outside of their official capacity in a provocative and aggressive manner.  Their actions only serve to damage perceptions of police legitimacy.