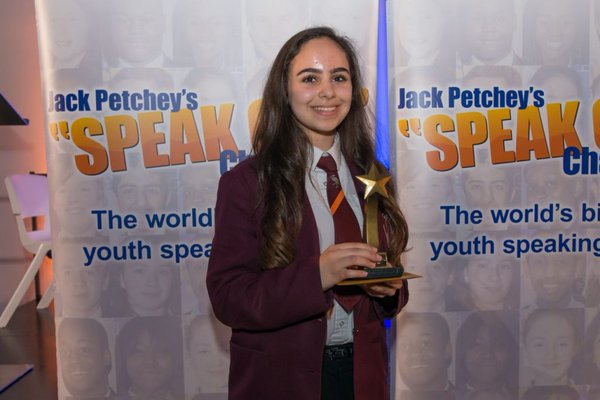 IHRC has written to the Speakers’ Trust expressing outrage over the organisation’s removal of a Palestinian contestant from a national speaking competition because of the anti-Zionist content of her winning speech.

Leanne Mohamad was removed from the ‘Jack Petchey Speak Out Challenge’ last week after a three and a half minute presentation that dealt with the injustice and discrimination faced by Palestinians since the creation of the state of Israel in 1948.

The decision means that despite winning the regional final Leanne will no longer be able to proceed to the national final.

IHRC believes that the decision flies in the face of the stated ethos underlying the competition which allows participants to “speak on any topic they feel strongly about ­– using only their voices, their words and their passion.”

Despite the claims to free speech, Leanne’s removal suggests that some voices and some narratives, particularly those conveying a Palestinian perspective on life under Israeli occupation, are less welcome than others.

The letter states: “Your organisation’s explanation that you ‘temporarily suspended’ Leanne for her own protection after her speech went viral on social media is implausible and indefensible. In fact the decision will be seen either as a lily-livered reaction to the pro-Zionism lobby or as a bias motivated intrusion on free speech.”

“Indeed it is ironic that Leanne’s speech about the discrimination and injustices that Palestinians face has itself become an early lesson for her on the double standards that apply in public discussion of the Palestine/Israel conflict,” it adds.

In the letter IHRC also raised concerns about reports that the decision was prompted by complaints from the notorious anti-Palestine blogger, Edgar Davidson, a man who is on public record calling “Palestinians are a fake creation” and also praising Tommy Robinson, the founder of the neo-Nazi English Defence League, as “simply a British patriot.”

IHRC has called on the Speakers’ Trust to review its decision both to protect Leanne’s freedom of speech and also to protect the reputation of a competition billed as ‘the world’s biggest youth speaking event.’