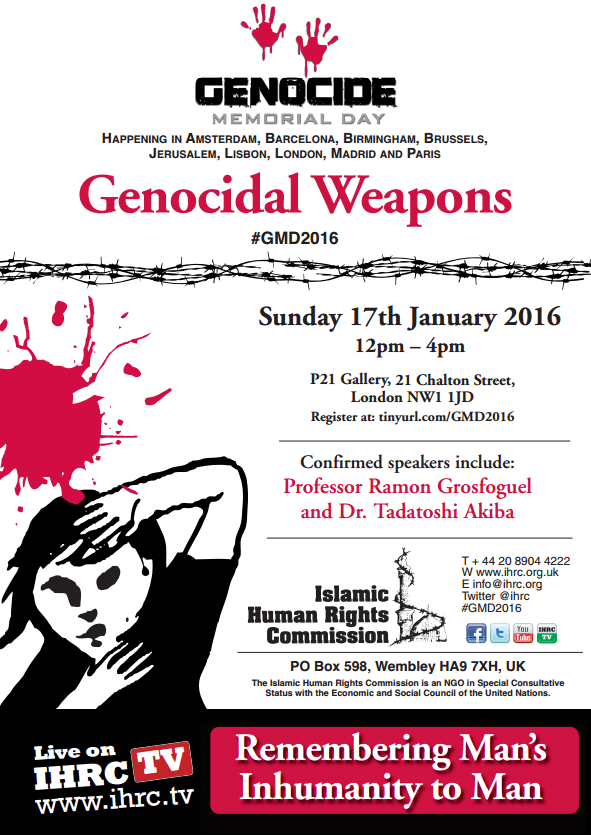 Simultaneous events are to be held on the third weekend in January in London, Birmingham, Lisbon, Madrid, Amsterdam, Brussels, Paris and Jerusalem to highlight the threat that WMDs, particularly nuclear weapons, pose to mankind.

Special attention will be given to exploding the myth that WMDs are essential to national security as a deterrent.

Once again this year GMD will expand to more cities around the world. This is evidence that global awareness of genocide as a phenomenon that concerns humanity as a whole is increasing. Established in 2010, Genocide Memorial Day is intended to give people an opportunity to recall man’s inhumanity to man. It is unique in that remembrance is not limited by the background of either the victims of the genocides or the perpetrators of any of the genocides. GMD rejects the notion that there is a hierarchy of victim depending on their background.

This year IHRC is privileged to be hosting the former mayor of the Japanese city of Hiroshima, Dr Tadatoshi Akiba who will be a keynote speaker in London. Along with Nagasaki, Hiroshima carries the unwanted distinction of being the only city to have ever been attacked with a nuclear weapon.

Also featuring will be Professor Ramon Grosfoguel, a leading light in the field of decolonial studies.

To coincide with this year’s GMD IHRC has organised a poetry competition for young people. Poems must be related to the theme of genocidal weapons of mass destruction. Entrants must be aged 11-18 and all entries must be sent to gmd@ihrc.org by 6 Januray 2016.

First prize is an all-expenses paid trip to Bosnia with an opportunity to visit sites connected with the Srebrenica massacre of 1995, for the winner and an accompanying adult. Second and third prizes are £50 and £25 IHRC bookshop vouchers respectively. Winners will be announced at the GMD event in London.