Forwarded Press Release: UK – Family of Babar Ahmad launches e-petition to mark the 7th anniversary of his detention without trial 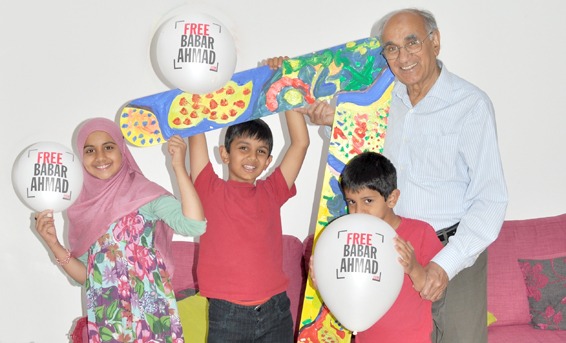 To mark the 7 year milestone, Babar Ahmad’s family have set up an e-petition on the official government website urging them to put him on trial in the UK. The family are aiming to get 100,000 signatures to force a parliamentary debate in his case. They have also released a photograph of family members to mark the 7th anniversary.

Babar’s nephew Ibraheem said, ‘I was 7 weeks old when Uncle Babar went to prison, now I am 7 years old.’

“This anniversary brings back dreadful memories of that day seven years ago when I received a call from the police telling me that my son had been arrested.  Babar – it’s been 7 years but we will not let you be forgotten.”

1) Babar Ahmad is the longest detained without charge British citizen in the modern history of the UK. Despite repeated calls from politicians, lawyers and activists alike for Babar to be tried in the UK, Babar remains detained without trial in a maximum security prison in Worcestershire today. To this day, no prima facie case has ever been made against Babar and he has been prevented from challenging the allegations against him.

2) In June 2011, the Houses of Parliament, Joint Committee on Human Rights urged the UK government to change the law so that Babar Ahmad perpetual threat of extradition is ended without further delay.

3) Following the acquittal of four police officers charged with causing ABH to Babar Ahmad, Judge Geoffrey Rivlin QC, the Recorder of Westminster and Deputy High Court Judge said, ‘I express the hope that his ordeal as a man in detention in this country for a number of years without trial is brought to an end as soon as possible…It is no concern of this court as to which, but it is a matter of concern and I would have thought should be a matter of concern to the public at large, quite apart from Mr Ahmad, that here is a man who has been in custody for literally years without knowing what his fate is to be.’

4) In 2005, District Judge Timothy Workman, then the most senior extradition judge in the UK, said about Babar Ahmad’s case. “This is a difficult and troubling case. The defendant is a British Citizen who is alleged to have committed offences which if the evidence were available, could have been prosecuted in this country.”

5) Babar Ahmad’s final appeal against extradition is currently with the European Court of Human Rights. The judgement is expected to be delivered in late 2011.

6) Link to e-petition launched by family of Babar Ahmad