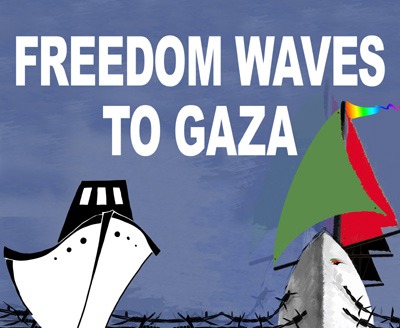 The whereabouts of British journalist, Hassan Ghani of PressTV is unknown. On Saturday prison authorities told lawyers that Hassan was not at the prison, yet we know that he has not yet been released. Freedom Waves organizers demand that the Israeli authorities reveal where Hassan Ghani is being held and that he be allowed access to a lawyer.

The Israeli authorities have tried to pressure the human rights defenders that remain in Israeli prison to sign a voluntary deportation agreement (waiver of right to see a judge) in order to be immediately deported. The activists refuse to sign, not because they want to come before an Israeli judge, but rather because the wavier states that they came to Israel voluntarily and entered the country illegally, which are patently untrue in light of the fact that Israeli naval ships violently seized the Tahrir and Saoirse, and forcibly transported them and all on board to Ashdod. Israeli authorities have ignored requests by the group’s lawyer to deport the activists immediately without having to sign this form that contains falsities meant to absolve Israel of responsibility for illegal abduction of foreign nationals in international waters.

Because they have refused to sign the waiver, according to Israeli law, they will be detained for 72 hours and then brought before an immigration judge, who will rubberstamp the deportation order. After this mock legal process, deportation will commence. For the first 24 hours of their abduction, none of the activists, crew, or journalists, were allowed to call a lawyer or family members. On Sunday, a few were able to make one one-minute phone call.

NOTE: Various accounts from prisoners have come out contradicting Israel’s claim of a peaceful takeover of the boats. Some activists were tasered and beaten, and at least one of the captains abused during interrogation. For accounts that we have been able to obtain, please see: www.tahrir.ca and www.irishtogaza.org