Genocide Memorial Day to focus on deadly impact of sanctions 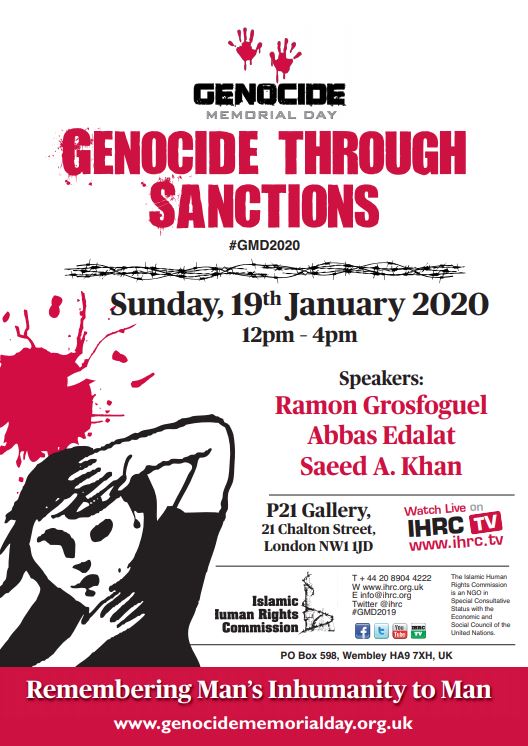 Economic sanctions are to be the focus of the annual Genocide Memorial Day.

Events held in London, Brussels and Amsterdam will examine the aims and effects of sanctions and interventions against different countries, with a particular focus on Iran and Venezuela.

In Iran for example many medicines needed by patients can only be imported and US-led sanctions have curtailed their supply. The lives of hundreds of thousands of patients in Iran are now under direct threat as a result of sanctions.

While the western narrative is that the aim of sanctions is to pressure the government, the reality is that they aim to squeeze the country’s people and fuel social discontent. The restrictions on medicine and medical equipment which cannot possibly have a dual function and are solely intended for humanitarian purposes is sufficient proof that sanctions are not as targeted as is claimed.

The sanctions against Iran are similar to the controversial Oil for Food programme applied to Iraq in 1995. The stated aim of the West was to assist in the demilitarisation of Saddam Hussein by depriving him of financial means whilst leaving open the ability of the Iraqi government to feed its own people. However the scheme led to the deaths of thousands of innocent men, women and children as many basic items were banned or delayed from being imported.

In Venezuela the economic boycott of that country has led to 40.000 deaths. The American Center for Economic and Policy Research in Washington has calculated that due to the boycott the mortality rate has increased with 31% from 2017 to 2018. Due to the lack of medicine the chances are that in the coming years large numbers of people will die, especially among those with HIV (80.000), kidney dialysis (16.000), cancer (16.000) and diabetes (4 million).

GMD was started in 2010 by the Islamic Human Rights Commission, founding member of the Decolonial International Network, as an annual tradition to commemorate the Zionist attack on Gaza in 2008. GMD aims to create awareness about the factors leading up to genocide and what we can do to prevent them.

Genocide Memorial Day is a day given to remember man’s inhumanity to man in the perpetration of genocides and genocidal acts. IHRC has been holding GMD commemorations since 2010 and have attracted a variety of speakers, diverse audiences and activists of all political, religious and ethnic backgrounds in highlighting the genocidal acts that are given insufficient exposure by the mainstream media.

Speakers for the London event include:

Ramon Grosfoguel, Professor at the University of California Berkeley, US

Saeed A. Khan, Lecturer at Wayne State University, US

Full details of the London event:

For details of the Brussels and Amsterdam events please visit the IHRC website events page. https://www.ihrc.org.uk/category/activities/events/