NGOs declare unity in the face of sectarianism and colonialism 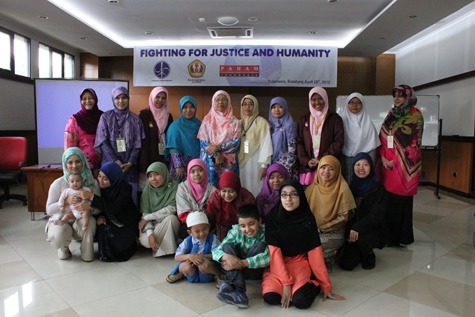 The meeting is hosted by PAHAM, a leading Indonesian human rights group.

Speakers and attendees travelled from the UK, America and Iran as well as from the surrounding region for the conference.  Topics ranging from the Palestinian struggle, Islamophobia as well as the Arab spring were discussed during the opening sessions.

Under the universal message of unity the participants discussed and debated a wide range of issues.   The current wave of revolutions has also given rise to sectarian divisions but the conference aimed to highlight the root causes of such division, namely the imperial powers that are trying to hijack and influence the revolutions.

Chair of the IHRC Massoud Shadjarah said “We all come from very diverse backgrounds but there is one thing that holds us together and that is the right of one Muslim over another.”
The Universal Justice Network has met under the umbrella for unity for the human rights of all oppressed people regardless of religious beliefs.

“Breaking down artificial colonial borders and bringing people together is one of the main objectives of the Universal Justice Network,” said Chair of Citizens International Mohideen Abdelkader.

The Islamic Human Rights Commission and Citizens International are each secretariats of the network.

For more information or to get involved with the organisations work please sign up for the email alerts or contact ahmed@ihrc.org.