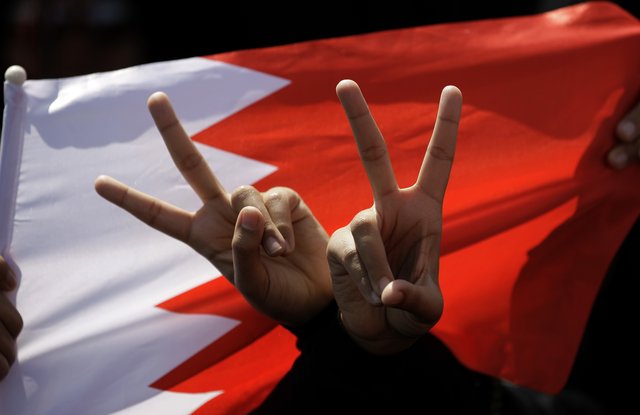 As you may be aware, pundits, journalists and politicians have made a conscious effort to dislocate the Bahraini struggle for freedom from oppression from its Arab counterparts in Libya, Yemen, Egypt and elsewhere. These efforts have been welcomed wholeheartedly by the Bahraini authorities, who have justified suppression of all opposition towards their authoritarian regime as a product of sectarianism.

The Western media have reproduced the logic driving the Bahraini regime’s suppression – that those demonstrating do so out of a hatred for Sunnis; disrupting what is an equal, fair and just society.

The Muslim community have today co-signed a statement[1] rejecting this strategy. Refusing to be complicit in the regime’s brutality, their statement condemns the marginalisation of Bahrain’s struggle from the political transformation in the Arab world; the false attribution of sectarianism to the opposition; and testifies to the injustices faced against the Bahraini people. The latest of these include the illegal Saudi-led invasion in March, the murder of 18 Bahrainis by security forces since February, and the disappearance and imprisonment of countless others since the uprising began.

“The ease with which the dictators of Bahrain and Saudi Arabia have influenced Western politicians and ‘respectable’ media outlets to imagine that they possess a right to openly commit atrocities under the pretence of sectarianism is shocking. The Muslim community is refusing to be complicit in this manner, and reject the Bahraini regime’s excuses for slaughtering its people.

“The Muslim community have taken a crucial step in this direction by declaring that it is immoral to satisfy the Saudi and Bahraini regimes’ demands that the struggle be viewed as motivated by sectarianism, rather than the common dissatisfaction of Muslims with their tyrannical regimes across the Arab world. We urge Western politicians and media outlets to immediately cease being complicit in the campaign of violence against the Bahraini people.”

Signatories to the statement include Muslim Association of Britain, International Muslim Women’s Union and Islamic Forum of Europe.

[1] Full text of statement and list of signatories follows below.

In the Name of Allah. Most Gracious, Most Merciful

As Muslims in keeping with our duty to aid the oppressed whoever they may be, we the undersigned condemn the atrocities being committed against the Bahraini people by its regime as crimes against the rights enjoyed by all men and women regardless of religion, race, ethnicity or any other characteristic. We see no sectarianism in the legitimate demands of the Bahraini people. The regime has shown no preference of religious affiliation in its brutal suppression of its people over the weeks. We believe that those that are being arrested, murdered and brutalised by security forces and foreign armies are making these sacrifices so that Bahrain may attain a just political system; where Muslims – whether Shia, Sunni or of any other affiliation – are able to enjoy the God-given rights of all human-beings. This is echoed in the chants of the people of Bahrain that they demonstrate as neither Shia nor Sunni, but as Bahrainis. It is the duty of Muslims, indeed of all people, to support the struggle of the Bahraini people against their oppressive regime. It is also the duty of the King Hamad b. Isa al-Khalifa, Prime-Minister Khalifa ibn Salman al-Khalifa, and the regime as a whole to listen to the cries of the people; cease immediately their campaign of violent suppression; and allow for Bahrainis to decide their own future.

May Allah (swt) reward their efforts.