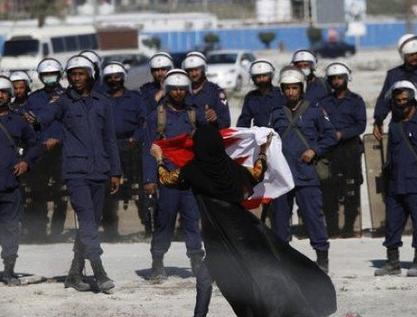 The characterisation of the Bahraini uprising as sectarian permeates the discourse in Western political circles and state-owned Arab newspapers. This corresponds very poorly with the composition of the ever growing death tally and prison population in the island.

The cases of Mohamed Al-Buflasa, Ayat Al-Qurmezi and Sayed Ahmad Saeed Shams highlight how little the Bahraini regime cares about sectarian affiliation when suppressing its people.

Mohamed Al-Buflasa, a poet, writer and former independent candidate in the Bahraini parliament, was the first high-profile figure to go missing during the popular demonstrations. He is also a Sunni, and thus harbours no sectarian agenda in opposing the regime.

Ayat Al-Qurmezi, a 20 year old woman, was arrested for reciting an anti-monarchy poem in Lulu Roundabout in February – having been subjected to death-threats, harassment and defamation.

Sayed Ahmed Seed Shams, a 15 year old boy playing football outside of his home in Sa’ar, was shot dead by security forces. Unarmed and wearing a Manchester United football shirt, his attempt to avoid confrontation was enough reason for him to be killed.

Massoud Shadjareh, the chair of IHRC, said:
“The ease with which certain people have painted the struggle against the Bahraini regime as spurred by sectarian hatred is abstracted from reality. The diversity of those bearing the brunt of the regime’s campaign against its people speaks volumes against this narrative. Whether children, poets, activists; their concern is not that the government is Sunni or that the protesters are Shia; but rather that the political system in Bahrain is unjust”.