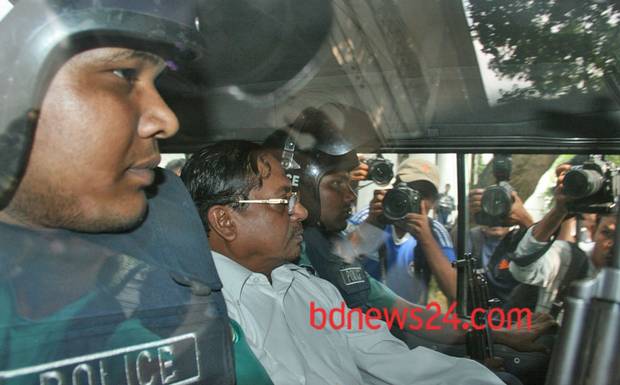 Death sentences issued over the last few days against opposition leaders in Bangladesh highlight the extent to which the government is out of control in its attempts to cripple the political opposition.

This morning Bangladesh’s Supreme Court upheld the death sentence against a senior politician who was found guilty of atrocities committed during the country’s 1971 war of independence.

The court rejected an appeal from Mohammad Kamaruzzaman, the 62-year-old assistant secretary-general of the opposition Jamaat-e-Islami party, who was convicted by a special war-crimes tribunal last year on charges that he murdered dozens of civilians while operating a pro-Pakistan militia in central Bangladesh during the war.

It rejected claims that as a mere teenager during the conflict, Mr Kamaruzzaman could not have played the prominent role of death squad leader of which he stood accused.

Today’s verdict follows the sentencing to death over the weekend of Quasem Ali, 62, an executive member of the Jamaat-e-Islami and considered a main party financier. Mr Ali was found guilty on charges of killing, torture and abduction during the war.

Saturday’s sentencing brought to eight the number of death penaltes issued by the war crimes tribunal set up in 2009 by the ruling Awami League to bring to justice those guilty of atrocities during the 1971 war of secession against Pakistan.

Last Friday the tribunal issued a second death penalty against Motiur Rahman Nizami, chief of Jamaat-e-Islami, after his conviction for alleged war crimes including murder, rape, looting, abetment and the massacre of Bengali intellectuals during the war. He had already been convicted of smuggling arms to Assamese insurgents and sentenced to death in January this year.

So far the government has only carried through one execution, hanging Abdul Kader Mullah in December 2013 after he was found guilty of war crimes by the tribunal.

Human rights organisations and opposition groups have condemned the International Crimes Tribunal (ICT) set up in 2010 by the ruling Awami League to investigate atrocities carried out during the 1971 war for failing to meet international standards of justice. They have accused the ruling Awami League of using the ICT as a tool with which to weaken its political opponents. Almost the entire leadership of the Jamaat-e-Islami has been indicted for committing war crimes.

The ICT has been beset with allegations of irregularities including the prosecution conspiring with judges, failing to allow the defence enough time to prepare its cases, intimidating witnesses and in the case of Abdul Kader Mullah, retrospectively changing the law to send him to the gallows after an initial life imprisonment sentence had failed to satisfy popular demands.

IHRC urges the international community to take all steps to pressure the Bangladeshi government to halt the executions and to promptly disband the war crimes tribunal as it has proved itself unfit for the purpose of establishing justice and is instead simply an instrument of oppression in the hands of the Awami League.