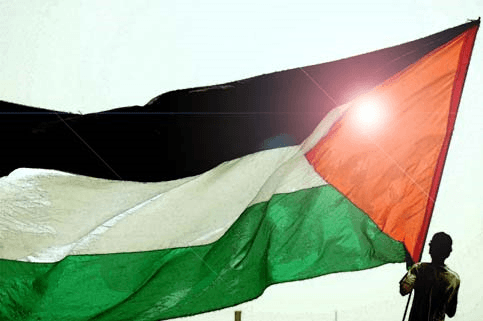 A London estate agent who was arrested by police after they received a solitary complaint that he had displayed a Palestinian flag daubed with the words “Zionism=Nazism” outside his business premises will not face charges over the incident.

The man, who wishes to remain anonymous, saw several police cars descend on his workplace after a passer-by reported the presence of the flag in his shop last July at the height of the brutal Israeli military assault on Gaza.

He refused police requests to take down the flag at which point they read him his rights, handcuffed him and bundled him into the back of a police van. After spending 22 hours in a police cell he was released on bail while the Crown Prosecution Service decided whether he could be prosecuted under incitement to racial hatred laws.

This week police notified him that they will not be taking any further action over the incident, an outcome that IHRC was largely expecting in view of the fact that the estate agent was not breaking any laws by displaying a political message.

The police action was one of a spate of incidents of harassment of Palestine supporters to have taken place recently as they step up protests and pressure against the Israeli state. Another shop owner in Wembley, north west London, reported receiving email threats and warnings of a boycott of his business after also putting up a Palestine flag in his window.

In Manchester, an anti-Zionist rabbi had his car set alight last week after suffering weeks of attacks on his property from Israel supporters angered by his opposition to Israeli war crimes in Gaza. The arson attack, which totally gutted his car, came minutes after police had failed to respond to a report from the rabbi that someone had placed a petrol-soaked rag near his engine in preparation for such an attack.

IHRC is writing to the Metropolitan Police borough commander demanding an explanation for the businessman’s arrest and asking the force to publicly state its procedure in dealing with such incidents. IHRC believes this be a case of unlawful arrest and will be helping the businessman pursue redress for his maltreatment.

IHRC chair Massoud Shadjareh said: ‘We are extremely concerned about allegations that the police’s special relationship with zionist and pro-Zionist organisations including the Community Security Trust is the main reason for the disparity in these cases. We therefore urge the police to investigate these allegations, to ensure that there is equality in their service provision, and to be more transparent in their dealings with such groups in order to regain the trust of all communities.”

IHRC has previously highlighted other instances of differential treatment of communities by police including that of pro-Palestine demonstrators in 2008 and 2009. A report into that policing can be found HERE