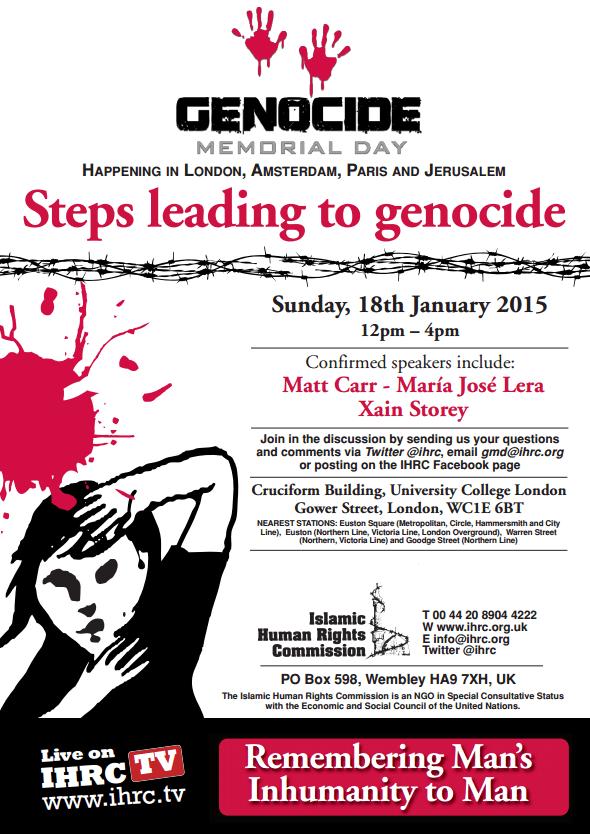 Six years ago, IHRC decided it was imperative to set aside a day to remember the genocides, genocidal acts and genocidal policies of the modern era. Coinciding with the anniversary of the end of Operation Cast Lead in Gaza, Genocide Memorial Day was born.

GMD rejects the notion that there is a hierarchy of victims depending on their background. It seeks to hold people accountable by highlighting individuals people and power structures responsible for perpetrating genocidal acts and by remembering the victims.

The theme of Genocide Memorial Day 2015 is ‘Steps leading to Genocide’. It intends to bring to attention the political, social and economic processes that precede all genocides and which provide an indicator of looming crisis. Please see below for our list of speakers on the day as well as the topics they will be speaking on.

This year will see this event being synchronised with partner Genocide Memorial Day events in Paris, Amsterdam and for the first time: Jerusalem.

Raza Kazim of IHRC said: “I would urge that people concerned with xenophobic and racist oppression and the resistance to it to come and participate with great minds, thinkers and activists as to how we can better understand the steps that lead to genocidal acts in order to resist them better in the future. Genocide is an issue that is a direct attack on humanity, and thus needs a rigorous response from different communities comprising humanity”