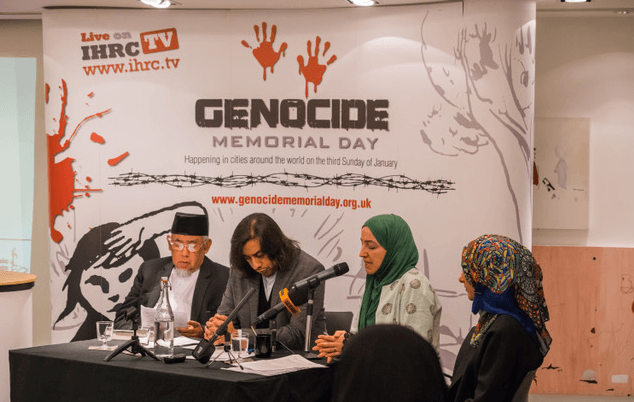 Facebook
Twitter
LinkedIn
WhatsApp
Email
Islamic Human Rights Commission announced the winners of the Genocide Memorial Day Poetry Competition 2017 on 15 January. The competition was created as a way to encourage young people’s literary abilities and creativity towards and around the theme of protecting humanity from genocide and genocidal acts. Genocide Memorial Day takes place every third Sunday of January and focuses on remembering man’s humanity to man. This year’s theme focused on the cultural genocide of Muslims and Jews in Europe with speakers including Professor Ramon Grosfoguel, Dr Rebecca Masterton and Sheikh Mohammad Azmi bin Abdul Hamid of Malaysia.
Joint recipients of first prize were Anisha Mehta with ‘Stand By’ and Tarzina Khatun with ‘Ship 1971’. They were awarded with a trip to Bosnia, where they will be able to learn more about the atrocities of the Bosnian genocide took place and learn more about the events.
Second prize was jointly awarded to Ifrah Bukhari for ‘The Subhuman’ and Shukria Rezaei for ‘My Hazara People’. They each received a £50 IHRC Bookshop voucher. Finally, third prize was awarded to Luqman Reza for his poem ‘One Dimension.’
Entrants were between the ages of 11 and 18 and the judging panel featured IHRC’s Abed Choudhury and renowned hip hop poet and painter Ibrahim Sincere. The breadth and variety of entries showcases the youths’ willingness to engage with such a difficult and often troubling topic.