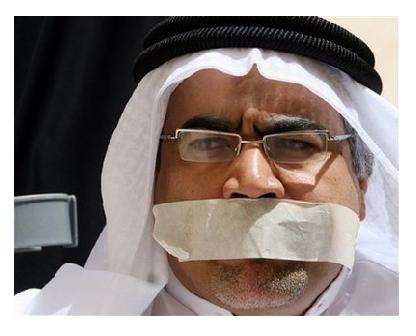 Al-Singace’s arrest was followed by the arrests of several other senior activists.  Abdul Ghani Al-Khanjar, the spokesman of the Committee of Martyrs and Victims of Torture, Sheikh Saeed Al-Nouri and Sheikh Mohammad Habib Al-Miqdad,  who have campaigned against political repression in the country, were arrested in early morning raids on their homes on 16 August.  Several other activists had already been arrested on 14 and 15 August, as protests against Al-Singace’s arrest spread around the country.

Shortly after Al-Singace’s arrest, the IHRC contacted Sheikh Hamad Abdullah Bin Khalifa, Head of Security in Bahrain, who confirmed that Al-Singace was being held but refused to give any further information.  The following day, on 14 August, the Bahraini News Agency reported an “official security source” as saying that Al Singace had been arrested on national security grounds, accusing him of inciting violence.

The current whereabouts of Al-Singace, who is disabled and restricted to a wheelchair, is unknown.  His lawyer, Muhammad Al Tajir, has said that he has not been able to locate him.  His wife and daughters, who were travelling with him, were also arrested, but were released after being interrogated.

“The arrest of Abdul Jalil Al-Singace appears to be a deliberate slap in the face of those campaigning for human rights in Bahrain, especially coming so soon after the King of Bahrain promised activists the freedom to work in the country.  Bahrain has a very poor human rights record, and it appears to be getting worse.  There are serious concerns that the plight of opposition leaders will become even more difficult in the run-up to the elections due on October 23.  All those committed to freedom, human rights and justice, must demand the immediate release of Al Singace and other political prisoners, and a radical change in the Bahraini regime’s approach to legitimate and peaceful political activism in the country.”