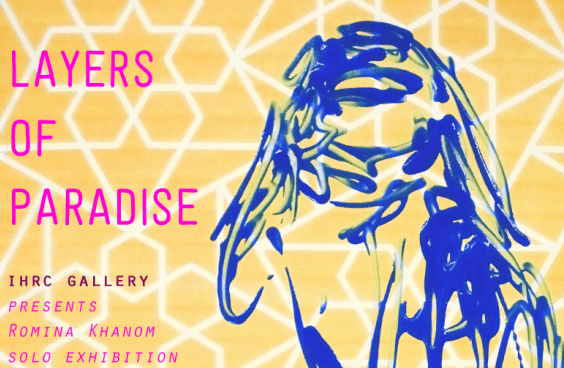 ‘Layers of Paradise’ is IHRC’s latest exhibition, featuring the work of artist Romina Khanom. With installations and sculptures inspired by Arabic calligraphy and sacred text from the Quran, Romina creates work that is spiritual in both form and aesthetic. The exhibition launch will take place on Thursday, 23 October at 6.45pm.

Studying art in college, Romina was the only Muslim on her course and as a result she found herself constantly questioned about her cultural background and her religious beliefs. Leading to some introspection, Romina began to look into her own barriers and beliefs. She began experimenting with shapes and calligraphy using verses from the Quran. Turning to the Middle East, she studied grand mosques and found herself fascinated with the geometry before her. It became an integral part of her work.

Artist Romina Khanom said: ‘The idea that art has to be pretty is something I’d like to change. My work is a celebration of Islam and the culture of the Middle East. It exists somewhere on the edge between the contemporary and the traditional, between the flat and the three-dimensional.’

‘Layers of Paradise’ will feature Romina’s sculptures and installations; these are typically made using stencils inspired by arabesque design and hand-cut with a precision knife. Her work aspires to be interactive; with visitors walking around or through the pieces. Through the use of light and geometry, Romina produces art that celebrates spirituality.

– ‘Layers of Paradise’ is curated by Nasreen Shaikh Jamal al-Lail

– The exhibition is FREE and will run until 30 December 2014

In the past the Islamic Human Rights Commission’s gallery has hosted the likes of Intifada Street’s Mohammad Hamza, Mamade Kadreebux and Naazish Chouglay of Labbaik Arts among others. Head of Research, Arzu Merali, states that part of IHRC’s philosophy has been has been “breaking down divisions between culture, law and politics, we are out there working for justice. I think some cultural aspects of our existence are not emphasised enough, there are many reasons for that, but where you can seek solace and gain inspiration, it’s all part of healing and important to focus on.”