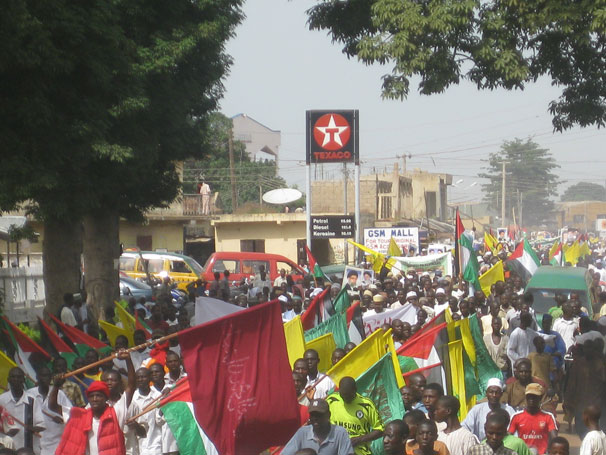 Further to today’s attack by police on the pro-Palestine demonstration Al-Quds Day in Zaria, more mobile police units have been moved into Zaria, Kaduna State, northern Nigeria.  As this is being written more armed riot police are moving in.

Further reports state that area near the home of the Islamic Movement’s leader Mu’allim Ibraheem Al-Zakzaky has been surrounded.

Leaked intelligence from the security services last week revealed a plan to assassinate Al-Zakzaky, as well as plans to violently disrupt the pro-Palestine march today.

Despite the leak, mobile police units were moved into the area of Zaria last week, and today police opened fire on the peaceful protest.  Updated reports say at least five people were shot and killed, with a sixth feared dead.  Pictures of the dead and wounded,a s well as of the march area available.

IHRC is deeply concerned as to the purpose of the deployment of police in this manner, particularly given the leaked reports last week.

IHRC is calling on the Nigeria government to intervene quickly and ensure that no extrajudicial action is taken against Al-Zakzaky and any of the members of the Islamic Movement.

IHRC further calls on the Commonwealth Secretariat and other relevant international organisations to take immediate action to ensure the Nigerian authorities protect all citizens in their jurisdiction from excessive and unlawful behaviour from the army, police or any other part of the security apparatus.