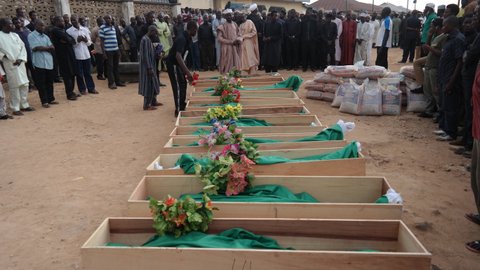 Facebook
Twitter
LinkedIn
WhatsApp
Email
An IHRC fact finding team dispatched to northern Nigeria to investigate the killing of 33 people during an annual Al-Quds Day demonstration has returned to the UK with harrowing details of human rights abuses committed by the country’s armed forces.
The findings include video footage of Nigerian soldiers firing on unarmed protestors located at the tail end of the march in Zaria on 25 July. Bystanders were among those killed in the violence. About 100 people were injured.
The IHRC team also found evidence that many of those arrested died in military custody. Reports indicate that some demonstrators were taken into detention alive and well and later emerged dead with signs of torture on their bodies. Others who were injured were detained for hours and brutalised before being allowed to seek medical treatment.
According to eye-witnesses three truckloads of soldiers, reportedly bussed in from the capital Abuja, opened fire at the demonstration without warning. Their presence has given rise to questions over why troops from outside the region were brought in to Zaria with accusations that the pro-Zionist Nigerian government is serving the interests of Tel Aviv by suppressing pro-Palestine activities.
The findings will form the basis of a detailed report to be published by IHRC into the atrocity which has largely been ignored by the mainstream media.
Among those killed were three sons of Sheikh Ibrahim Al-Zakzaky, a fierce critic of political corruption as well as the so-called Boko Haram movement.
The march in Zaria was one of at least 50 that took place in towns and cities across Nigeria. Al-Quds Day has been observed peacefully in Nigeria over the last 33 years under the leadership of the Islamic Movement in Nigeria, a mass movement led by Sheikh Zakzaky.
The killings prompted Iran’s Foreign Minister to summon the Nigerian charge d’affaires in Tehran and issue a stern rebuke.
Nigeria’s troops are currently in the spotlight for other recorded abuses against Muslims. Gruesome video footage circulated widely on the internet shows them slitting the throats of alleged members and supporters of the Boko Haram Movement.
If proved to be true both the Zaria and Boko Haram events cast grave concerns over the role of Nigerian troops in and UN and African Union peacekeeping missions around the world.
Chair of IHRC, Massoud Shadjareh, who led the fact-finding delegation said:
“These events strongly suggest that a section of the Nigerian army is totally out of control and is committing murder and extra judicial killings with apparent impunity. The Nigerian government and the international community have to hold the perpetrators of these abuses to account for their barbaric actions and make sure that justice is served not only for the sake of the victims sake but to ensure a just and peaceful environment for all the country’s inhabitants.”
For media enquiries please call +447958 522196 to get direct contacts in Nigeria +2348068217026 (Ends)
——————————————————————————————
IHRC is an NGO in Special Consultative Status with the Economic and Social Council of the United Nations.
Islamic Human Rights Commission
PO Box 598
Wembley
HA9 7XH
United Kingdom
Telephone (+44) 20 8904 4222
Email: info@ihrc.org
Web: www.ihrc.org
Twitter @ihrc