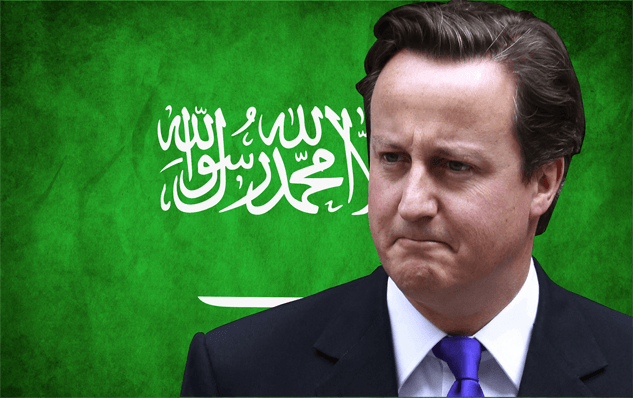 IHRC is shocked and dismayed at PM David Cameron’s decision to visit Saudi Arabia to strengthen UK-Saudi ties at a time when the Saudi state is engaged in an escalation of widespread human rights violations. The Saudi government is notorious as an oppressive system on all accounts, whether in the area of women’s rights, freedom of expression or the systematic use of violence against religious minorities and others who express dissent.

This gross abuse of human rights is clearly manifest in the country’s 30,000 political prisoners, as mentioned in the IHRC briefing ‘Saudi Arabia’s Political Prisoners: Towards a Third Decade of Silence’ [1], a higher figure than all other countries in the region. The regime’s contempt for women was clear in the abuse of female demonstrators protesting the political imprisonment of their relatives, and their assault on elderly women such as Azzah al-Zahrani [2]. Its vicious sectarian nature is clear [3] in its continued violent suppression of dissent in the country’s Eastern Province, where, most recently, Issam Mohammed, 22, was killed by live ammunition in al-Awamiya last night. Additionally, the Saudi government has become infamous for its support of dictatorships in the region, including the ousted rulers of Egypt, Tunisia and Yemen, and their open involvement in suppressing the people of Bahrain.

“Mr Cameron’s trip bears all the hallmarks of old fashioned misguided policy of paying cheap lip service to the values of freedom, democracy and human rights whilst the same time engaging in high profile visits for the sake pounds and pennies. He makes this trip to make sales that would strengthen Saudi military capacity despite recent questions from MPs on the committee on arms export controls as to why arms sales had not been revoked in light of recent abuses. The fact that, curiously, he is travelling without the accompaniment of UK reporters may suggest that he has given in to the pressures of a closed state where no questions may be asked.”

[3] Oral statement on the outcome of Saudi Arabia