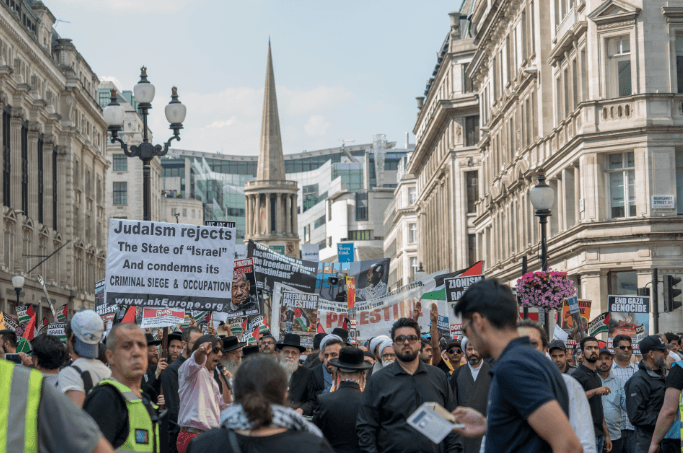 The success of this year’s al-Quds demonstration in London in the face of increased intimidation designed to have it called off is a testament to the abiding magnetism of the Palestinian cause.

The demonstration on Sunday 18 June passed off peacefully with over three thousand people from all over the UK turning out to support the beleaguered Palestinians as well as condemn the continuing Israeli occupation.

Pro-Israel supporters waged a massive smear campaign in the run-up to the event, employing Islamophobic and racist rhetoric to connect it to the recent terrorist attacks in London and Manchester. The pro-Zionist Campaign Against anti-Semitism had called on the Mayor of London Sadiq Khan to ban the demonstration.

However, in a letter to IHRC Mr Khan said police had reported no indicents from the event and that he respected the right of people to demonstrate as long as it was done within the law. He also praised the “good engagement” between organisers and the Metropolitan police.

The fact that the demonstration passed off peacefully once again highlights the good family-friendly and inclusive nature of the event which takes place on the last Friday of Ramadan every year in cities around the world. The presence of people of all faiths including representatives of the Jewish and Christain communities clearly exposes Zionist claims that Al-Quds Day is merely a front for the promotion of anti-semitism and hatred of Israel.

Notwithstanding this, the Zionist media has continued trying to demonise the demonstration even after the event. We believe this is a scare tactic designed to frighten people off from raising the profile of the Palestinian cause and the ongoing human rights abuses of the Israeli state.

By silencing critics the supporters of Israel hope to give the Zionist state a carte blanche to cement and increase its oppression of the Palestinians.