PRESS RELEASE: UK – Complaint to Newsnight over editing and contribution 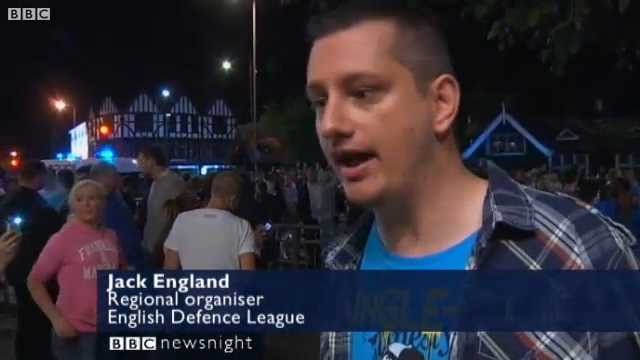 The piece contained edited footage which removed evidence of racist chanting and comments and the presence of support for far-right organisation the English Defence League (EDL).  Further Jack London, from the EDL was featured in the piece presenting the organisation’s presence in Eltham as a helping hand for locals trying to reclaim the streets from rioters.  His comments were presented without challenge in the video piece that preceded a studio discussion on the problems of recent vigilantism.

The full text of the letter follows.[1]  The Newsnight video piece can be found here http://www.bbc.co.uk/news/uk-14485494.  Links to the clips without those edits are found in the letter.

I am writing this open letter to express deep concern and to complain about the video piece by Stephen Smith, that preceded the studio discussion on the role and validity of vigilantism in the preceding days.

The clips that were selectively edited were used as examples of local residents trying to reclaim the streets.  The discussion that followed spoke in largely abstract terms about the problematics posed by such acts under the law, and also as possibly undermining rather than, as it was portrayed, trying to assist the police.  This is of course a valid debate, however the clips that were used were edited in a misleading manner.

Clip (i), which can be found here:  http://twitpic.com/63ltwf via @EverythingEDL, clearly ends with members of the group chanting “EDL! EDL!”  This part was removed, suggesting that the group were a group of locals.  Smith described them as the “guardians of Eltham”.  It has been established as of the night of 9 August and widely reported that EDL members from outside Eltham came to the area and were eventually dispersed by the police.

Clip (ii), found here amongst other places: http://www.youtube.com/watch?v=h6p4itkdLi8 again is presented as an example of local people reclaiming the streets, however the line from the first contributor “… they are taking the p***, and they are not English!” is edited out.

Both these edits result in the presentation of racist chanting and comments (in one case at least the arrival of a far-right group) as spontaneous acts of good but possibly misguided, citizenry.  These clips as available on the internet evidence the spectre of general as well as organised racism operating in the context of the last few days and is in and of itself a major story. However this was ignored and the evidence at hand twisted to suit another discussion.

Additionally, Jack London, from the EDL was quoted in the piece, explaining that 50 members of the EDL had arrived in Eltham to assist the good locals in organising themselves effectively.  These comments were made and left without any critique, or explanation that the EDL were a right-wing group whose previous street activities have included violent confrontations with ethnic groups and anti-fascist activists.  Their decision to turn up in Eltham where Stephen Lawrence was murdered in a racist killing is an extraordinary event to be overlooked let alone presented in a positive light.

The combination of this again, lays Newsnight open to the criticism of having a soft-line against fascism to the extent of uncritical promotion of a right-wing fascist organisation.

We believe an apology should be made for these editorial choices by Newsnight.  Further Newsnight must regain its credibility by challenging the rise of racism and fascism in the UK, rather than provide a platform for its vanguard.