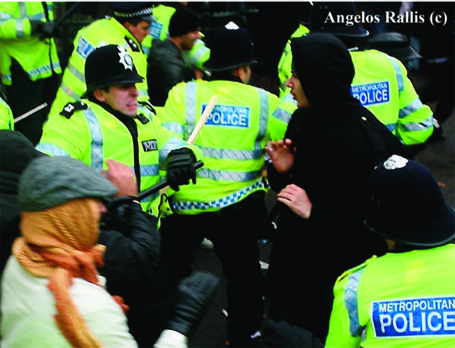 IHRC is deeply concerned with the continued harsh sentencing administered against the London Gaza demonstrators. IHRC fears that the defendants at the latest sentencing hearing on 19 February may face equally harsh sentences.

Ten demonstrators have already been sentenced to between 1 to 3 years. At the time of the demonstrations, two of those sentenced on 12 February were 16.  One of them is a Palestinian who lost two cousins murdered by Israeli security forces days before the demonstration. The defendants had no prior convictions.

IHRC is concerned the sentencing fails to take into account that  grave police mismanagement and abuse of police powers contributed to the tense situation at the demonstrations. Judge Denniss called the police response on the demonstrations “measured”. However, IHRC in its report on the Gaza demonstration has documented evidence which shows that far from being measured, the police tactics were brutal and resulted in aggravating tensions.[1]

“We are concerned that such heavy sentencing, the subsequent confiscation of passports and other intimidatory measures are an attempt to deter protesting, in particular in support of Palestine, and by Muslims. The IHRC report on policing clearly documents the culpability of the police in the demonstrations which is, sadly, not at all reflected in the proceedings.”

Joanna Gilmore, Researcher in the School of Law at the University of Manchester, said:

“The police complaints system has yet again failed to hold the police to account for their behaviour. Despite the severity of the complaints and the nature of the injuries suffered by protesters, the IPCC has refused to investigate any of the complaints, in the distorted belief that the Metropolitan Police Service can do a good enough job of investigating itself. It is no surprise, then, that no police officer has faced charges, or even disciplinary action, as a result of their behaviour at these demonstrations. In contrast, scores of young Muslims have been subjected to dawn raids, gruelling court processes and lengthy prison sentences for their part in the protests. It is high time that these contradictions are exposed.”