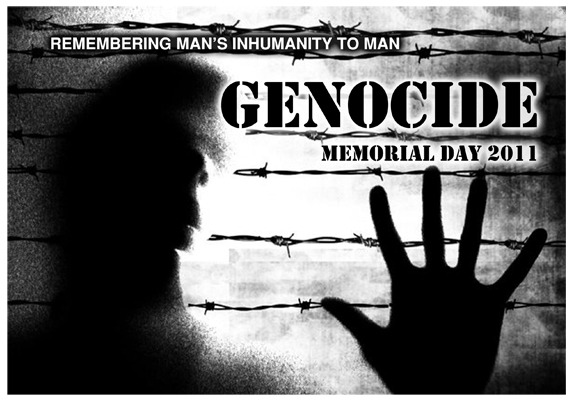 Genocide Memorial Day (GMD) commemorates genocides and genocidal acts of the modern era, and was prompted by the onslaught on Gaza in the 22 Day war end 2008 – early 2009.  The organisers of GMD seek to highlight that the understanding of the concept of genocide after the mass exterminations of Jews, Roma and Sinti and other peoples during the Second World War is far from understood.  Rather than a universal consciousness developing to stop further genocides and genocidal acts, events such as the massacres in Srebrenica, Rwanda and Darfur have highlighted that the idea of ‘Never Again’ still does not apply.

“GMD seeks to promote an understanding of genocide as a shocking part of the development of the modern world.  Many of the worst atrocities have been forgotten, yet man-made and deliberately exacerbated famines; mass deportations; sieges; indiscriminate bombings; use of chemical, biological and atomic weapons have all led to the deaths of millions.  Likewise policies and warfare targeting the economic, cultural and national life of groups constitute genocidal acts.  Sadly we are confronted daily with the effects of such acts, and worse still the continued perpetration of such acts.

“If we do not understand the implications of the near extermination of Native Americans, the Nazi concentration camps and gas chambers, or the forced removal of Aboriginal children in Australia and the 60 year long series of genocidal acts against the Palestinians, to name but a few, we will not be able to move towards a global community of justice.  The time for such understanding is now.”
Event organiser Raza Kazim said:

“This year we have renowned speakers addressing us on issues around the Nazi Holocaust as well as the mass extermination of Japanese civilians by the atomic bombings, and the potential for genocide through the use of weapons of mass destruction.”