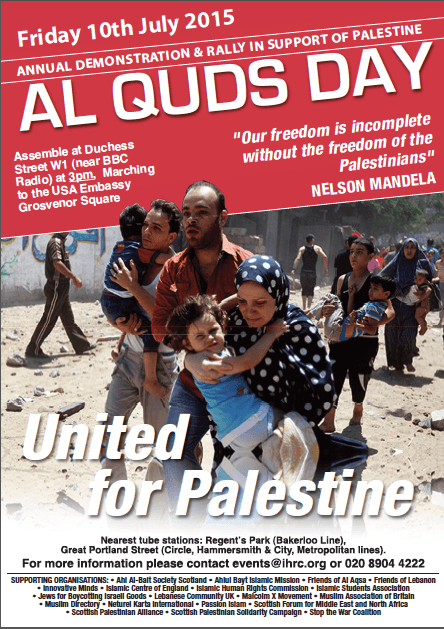 With headlines from the Middle East being dominated by widening turmoil in the region the continuing occupation of Palestine has been overshadowed by crises in Syria, Iraq, Yemen, Egypt and Tunisia since Israel’s brutal onslaught on Gaza last summer.

The effects of that invasion continue to scar the landscape and the inhabitants. Many of the Gaza Strip’s residential areas remain in ruins leaving their former inhabitants in temporary shelters and in many cases traumatised by the violence. Humanitarian agencies reports soaring rates of illness and psychological trauma, the latter particularly acute among children.

The Gaza Strip itself is still effectively blockaded by Israel with movement in and out virtually impossible for most inhabitants. The siege has been compounded by the closing of Gaza’s border with Egypt by the military regime in Cairo. The blockade has crippled the economy with 43% of people out of work – youth unemployment is said to be 60%. Some 80% of inhabitants are dependent on external aid to survive. According to a World Bank report published last May, the poverty rate is 39%.

Some 100,000 people remain displaced in Gaza, and 90,000 homes still need to be repaired or rebuilt. Of the $3.5bn pledged by the international community for Gaza’s reconstruction, just 27.5%, or nearly $1bn, has been disbursed. Power outages last for up to 18 hours a day because electricity, mainly brought in on power lines coming from Israel, is frequently closed off by the Israeli regime. A shortage of clean water is exacerbating already high rates of illness, pressurising a struggling health care system reliant on international handouts.

The occupation continues to hit Palestinians hard across the occupied territories. Illegal settlement activity in the West Bank continues apace in the face of hollow international objections and a continuing refusal to realise Palestinian rights. The ‘apartheid wall’ that has cut off whole Palestinian communities from one another and the rest of historic Palestine continues to exact a heavy toll on the population. Palestinians are routinely subject to arbitrary arrest and detention without trial, with reports of torture and extra-judicial killings commonplace.

With international attention turning to other problems in the region, this year’s Al-Quds demonstration will bring to the fore the ongoing suffering of the Palestinians and the wilful failure of the international community to bring it to an end. As happens every year, the march in London will be replicated in towns and cities around the world.

Last year saw as many as 9000 taking part in the capital with millions more participating worldwide.

The US embassy in London has again been selected as a rallying point because of Washington’s heinous support of Israel. The US continues to underwrite the Zionist regime financially, militarily and politically and block all attempts at finding a just solution to the Palestinian issue.

Date and Time of demonstration: 10 July from 3.30pm

Al-Quds Day was inaugurated in 1979 by Ayatollah Khomeini, who asked for the last Friday in the Islamic holy month of Ramadan to be set aside by Muslims as a day for uniting against Israel and showing support for the dispossessed and oppressed Palestinians.