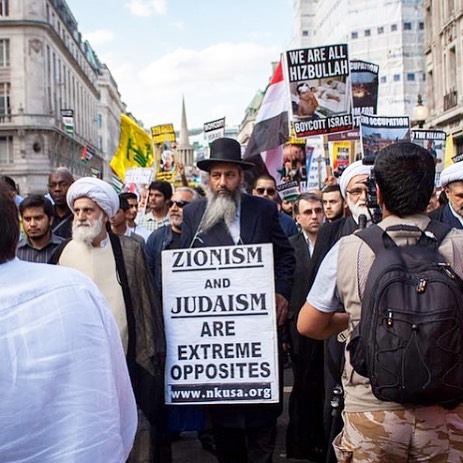 Following objections again this year by pro-Zionist groups against the annual Al-Quds demonstration in support of Palestinians, the Islamic Human Rights Commission – one of the organisations in the Justice for Palestine Committee which organises the event – has issued a statement condemning attempts by Zionist groups to smear the event.

IHRC believes that the objections raised exclusively by the pro-Israel lobby have no foundation and are designed simply to smear the event organisers and participants with the aim of concealing the ongoing crimes of the Israeli regime.

In fact, complaints about the demonstration being a vehicle for anti-Semitism have become an annual feature of the Al-Quds day build-up. Pro-Israel groups have levelled these and other false allegations and attempted to have the event called off.

It is evident from their baseless claims that there is an ulterior motive at play. This is to silence any criticism or opposition to the Zionist regime in Israel which continues to routinely oppress and violate the human rights of Palestinians both inside and outside the occupied West Bank and Gaza Strip.

Their aim is to brush under the carpet Israel’s ongoing atrocities, demonising those who stand for Palestine using cheap smear tactics so that in the absence of an alternative narrative they can force their deliberately distorted image of a peace-loving Israel on everyone else.

IHRC rejects the claim that the event is anti-Semitic. Indeed, it is supported by many Jewish organisations and every year there are many Jewish speakers. Last year, the main speaker at the event was renowned activist Michel Warschawski from the Alternative Information Center in Jerusalem.

If anything, the diversity of people at this demonstration – Jews, Muslims, Christians, people of other faiths and none, shows that people can come together to work together for justice for Palestinians, in a way that effectively challenges antisemitism.

The organisers refuse to be cowed by this kind of abuse, harassment and intimidation. We will not allow a small but vocal minority of nationalists, who defend and advocate violence against innocent Palestinian civilians, to hinder or defeat our attempts to highlight the plight of Palestinians which continues to deteriorate day after day, year after year.