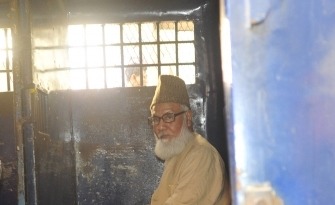 Citizens International strongly condemns the conviction and sentences of death and life imprisonment passed by Bangladesh’s Special Tribunal on the chief of Jamaat-al-Islami Maulana Matiur Rahman Nizami on fabricated charges of involvement in arms smuggling.

On 30th January 2014, Nizami was sentenced to death under section 25 of the Special Powers Act, and to lifetime Imprisonment under Arms Act, for alleged smuggling of arms in 2004. He was then the Minister of Industries in the Bangladesh Nationalist Party (BNP) coalition government led by the former Prime Minister Khaleda Zia.

He is also now awaiting judgment in Bangladesh’s International Crimes Tribunal (ICT) which has been criticised by the United Nations agencies, Amnesty International, Human Rights Watch and legal scholars for violating international standards and not providing a fair trial to the accused. Going by the ICT’s previous record on judgments given against other Jamaat and BNP leaders, Nizami will almost certainly receive a death sentence.

The trial and conviction of Nizami is politically motivated and forms part of the design by Prime Minister Hasina’sAwami League Party to eliminate the top leadership of the Jamaat and thus break up the Bangladesh Nationalist Party (BNP)-Jamaat alliance.

The events leading to Nizami’s prosecution and the evidence produced at the trial amply prove the ridiculousness of the charges against him and his conviction. The Special Tribunal’s verdict marks another nail in the coffin of the independence of the judiciary in Bangladesh.

In April 2004 the Bangladesh police discovered arms being unloaded from trawlers onto trucks and arrested a number of persons suspected of being involved in the arms smuggling. A first information report was filed by the police and there was no mention of Nizami in the report.

After investigations were completed, which did not disclose any evidence of Nizami’s involvement in the smuggling operation, 43 persons were charged one year later with the offence of smuggling arms before the Special Tribunal. The trial commenced in July 2005 and proceeded until August 2007 with 59 witnesses having testified.

In December 2007, the prosecution applied for further investigation into the case which was granted. In June 2011, after the AL had come to power, Nizami was charged together with the other accused of having committed arms smuggling offences. Strange, it took 7 years for the prosecution to find “evidence” to charge Nizami!

The prosecution did not produce any evidence to prove the offences under the Arms Act and the Special Powers Act for which he was prosecuted and convicted. There was not an iota of evidence to show that he had knowledge, possession, or control over the smuggled arms. The Judge’s conclusion that he had possession of the arms because the jetty where the arms were unloaded came under Nizami’s Ministry is preposterous as it was not a protected place and was freely accessible to the public.

The conviction and sentences were based on the evidence of only two former government officials who claimed that they met Nizami two days after the incident and asked him to form an enquiry committee.  Nizami declined to do so on the ground that the Ministry of Home Affairs had already formed a high level committee to enquire into the incident. No other accused or witnesses mentioned Nizami’s name in their depositions.

Nizami’s refusal to form a committee to inquire into the incident cannot by any stretch of imagination be construed as an offence under the two Acts. Since the smuggling of arms is a criminal offence the proper authority to investigate the matter is the Ministry of Home Affairs which is responsible for internal security and not the Ministry of Industry. The perverse finding of the judge reveals his bias in the trial and conviction.

Bangladesh is a failed state. It is one of the poorest nations in the world. Over 70% of the population survive on less than $2 a day. It is ranked 146th out of 187 countries in the Human Development Index (HDI) ranking, just above Sub-Saharan Africa.  Corruption is pervasive and the judiciary is the most corrupt institution, according to Transparency International.

Instead of focussing efforts on promoting national unity and wiping out poverty and corruption, Prime Minister Hasina and the AL are creating deep divisions within Bangladesh society and further corrupting the judiciary to serve Awami League’s political objective of eliminating the opposition.

When the democratic process is aborted and the rule of law ceases to exist, victims of state terror would turn to violent methods to defend their rights and obtain justice. The state which terrorises its people would label such violence as “terrorism”.  The late Nobel Peace Prize winner Nelson Mandela’s statement in court in 1964 on the use of violence by the victims of the South African apartheid regime is pertinent to the situation in Bangladesh. He said:

“I must deal immediately and at some length with the question of violence…I do not, however, deny that I planned sabotage. I did not plan it in a spirit of recklessness, nor because I have any love of violence. I planned it as a result of a calm and sober assessment of the political situation that had arisen after many years of tyranny, exploitation, and oppression of my people by the Whites.”

If the international community continues to ignore the tyranny and lawlessness in Bangladesh, some of the victims will certainly resort to violent means to put an end to their suffering. Such a development is bound to have serious implications for peace and stability in the region. We, therefore, appeal to the United Nations Security Council to:

• Take cognisance of the breakdown of law and order and the collapse of the democratic institutions in Bangladesh and to take urgent steps to restore democracy and protect human rights there.

• Institute sanctions on the supply of arms and weapons to Bangladesh.

• Refer to the International Criminal Court for investigation of the crimes against humanity committed by the Bangladesh government ministers and officials and to prosecute and punish those responsible.

Citizens International is a global initiative to foster awareness, activism and advocacy on issues that are central to the stability and wellbeing of humanity at the beginning of the 21st century. We believe that irrespective of race and religion, the interests of humanity are undermined by a reversion to military might to resolve issues and that the international order must rest on the rule of law, based on the United Nations Charter and principles of international law.

Doctrines of pre-emption, theories of ‘clash of civilizations’ and unilateralism through use of force demand that all those committed to a just and peaceful world join hands to resist and reject this dangerous agenda.

Citizens International promotes dialogue among civilizations, rejecting both terrorism by the State and non-state actors, resisting the militarization agenda and refuting attempts to malign and vilify Islam and Muslims.