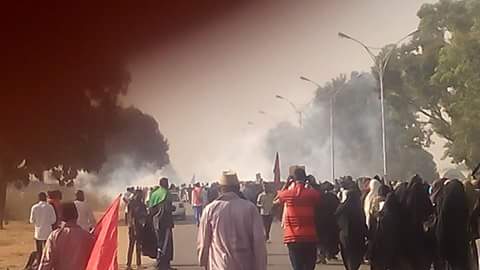 The final death toll from yesterday’s attacks by the Nigerian security forces on peaceful processions marking the 40-day anniversary of Ashura could reach 100, according to eye-witness reports.

Hundreds more were injured after heavily armed soldiers dressed as police in approximately 100 trucks opened fire on a procession on the outskirts of Kano city.

Soldiers also fired tear gas at the marchers whose procession was one of many strands from all over the country trying to reach the city of Zaria to join up with the main gathering which in previous years has attracted several million people.

Women and children were among the dead and wounded. The procession organisers are finding it difficult to compile a list of all the victims since many of the corpses were taken away by the army.

Among the more disturbing reports to emerge from yesterday’s sickening violence was of soldiers chasing and shooting down fleeing participants.

The Islamic Movement of Nigeria (IMN) which organises the processions said it was “bewildered as to why it is now criminal for some people to choose to trek to a certain town if they wish”.

The attacks occurred despite a plea last week to the Nigerian president by IHRC that he act to ensure the protection of those taking part in the annual 40th day commemorations of Ashura.

The plea followed credible reports that security forces planned to sabotage Arbaeen processions in a continuation of the persecution of the IMN.

In a statement issued yesterday the IMN said: “We view the unwarranted killings by police as continuation of the army pogrom started in Zaria last year”.

That was a reference to the unprovoked attack by security forces in December 2015 against the IMN which led to over 1000 people, mainly IMN members and supporters, being killed. The leader of the IMN, Sheikh Ibrahim El-Zakzaky was shot and arrested. He remains imprisoned without charge, in violation of domestic and international law.

Yesterday’s attacks follow similar events last month when Ashura commemorations were targeted by security forces across several states in northern Nigeria in a continuing crackdown on the IMN. Over a dozen people were killed by police and army gunfire during the processions and many others beaten by thugs hired by the authorities to sabotage the events. Places of worship associated with the IMN were also attacked.

IHRC chair Massoud Shadjareh said: “The nature of these attacks, carried out in multiple places and with prior warnings clearly shows that this was an organised and premeditated attack to stop peaceful marchers reaching Zaria to take part in a peaceful and lawful gathering. It also highlights once again that Nigerian security forces are out of control and free to commit atrocities.”

Videos of the procession and attacks are on youtube: