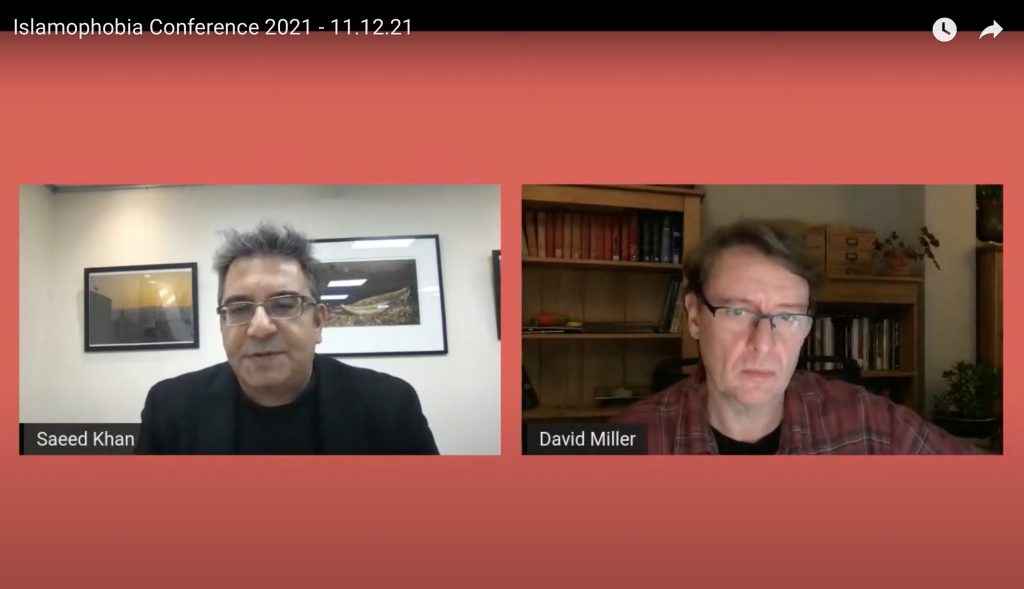 On Thursday 13 January 2022, The Times contacted IHRC, and various Islamophobia Conference participants who shared a panel with Professor David Miller.

The questions posed in anticipation of writing an article attacking some of Professor Miller’s comments are pasted below, with IHRC’s response and screenshots of the email exchange.

You can watch the exchange that The Times have extracted quotes from below. The exchange begins with Sandew Hira to which David Miller responds.

IHRC finds the attempts to distort Miller’s comments, the panellists responses and the usual demonisation of IHRC and all pro-Palestinian activism scurrilous and contemptible. It is an egregious distortion of reality and one that needs to be called out not just by anti-racist activists but also principled members of the fourth estate.

Read the text of the exchange below the screenshots.

Response from IHRC to Tom Ball at The Times.

Thanks for your email.  You seem somewhat confused about what was said on the day. Either that or you are deliberately misrepresenting it.

It is interesting to note that you chose to withhold the identity of your expert who you are relying on to vilify Miller’s words when seeking a response from IHRC and other participants on the panel.

Our response to your questions below.  We trust you will print it in full:

Anyone who watches the full segment that includes the various quotes you have pulled out from different places will see it is a discussion on Racism and Islamophobia in Academia and How to move Forward (not as you state on Zionism and the Holocaust).

David Miller uses the metaphor of the ‘Master’s tools’, originally used by Audre Lorde, in response to Sandew Hira. He was reflecting upon the utility or lack thereof of Enlightenment values (which it appears Miller was supporting) in critical analysis, as opposed to completely rejecting the Enlightenment as a colonial tool (as was raised by Hira). He speaks of the IHRA as one of the conceptual tools of the master (Zionism in this instance). No part of this or any discussion during the event advocated violence. To say otherwise is perverse.

As regards the organisations you state David Miller mentioned, these are all controversial in their outlook and they can hardly be surprised to be the subject of adverse commentary given many of their stances.  As organisers we do not necessarily agree with some, all or any of the comments of contributors.  I am sure neither they or The Times are advocating cancel culture as a way of dealing with their critics.

Email from Tom Ball at The Times.

Subject: The Times – right of reply Good afternoon.I am a journalist from The Times newspaper. We are preparing an article about an online seminar that the IHRC hosted on December 11 2021. The seminar was live streamed on YouTube here https://www.youtube.com/watch?v=EUiAfMAXxlQ&ab_channel=IHRCtvIn the seminar David Miller, one of the speakers, makes a comment that appears to advocate the use of  violence in the form of “submachine guns” and “gelignite” in a discussion on Zionism and Holocaust remembrance.The comment, which we quote, is as follows: “When people say ‘you can’t destroy the master’s house with the master’s tools’, on the contrary, you can. “Gelignite is the master’s tools, sub-machine guns are the master’s tools, these are tools which can be used absolutely to destroy the master’s house. “I think the same is true with concepts of categories. Let me take the example of the IHRA [International Holocaust Remebrance Alliance]. The IHRA is, well, shall we call this the master? It’s the Zionists’ tool. A tool specifically put into the forge and welded and manipulated and made malleable by the Zionist movement.”We will note that the remarks went unchallenged by the four other speakers at the seminar, some of whom can be seen smiling and laughing in response to the comments.We will include in the article criticism from an antisemitism expert who says Miller’s comments “appear to suggest that he approves of using violence to ‘destroy’ political opponents.”The expert added, with reference to the IHRC: “His hosts on this online talk also have questions to answer about providing a platform for Miller to express such extreme views unchallenged by any other speakers.”We also will note in the article that at the seminar Miller claims the entire British anti-fascist movement was contaminated by zionism and must be dismantled.He said: “It’s the same in a number of British anti-racist organisations now. The Community Security Trust comes straight from there. Tell Mama comes by one remove from there. Hope Not Hate by two removes from there via Searchlight.”These are all organisations which are fundamentally compromised by having a pro-zionist orientation. That’s the whole of the British anti-racist movement contaminated because all the way through this process organisations like Unite Against Fascism, to some extent the Anti Nazi League, all of them collaborated with these organisations which had a blind spot on anti-Arab, anti-Palestinian racism and on Islamophobia.”This is a fundamental weakness of the British anti-racist movement from the 1940s to now. We have to face this. What is it you do with racism? You dismantle it, you eradicate it. You have to work out how you dismantle these organisations brick by brick, take them apart so it’s not possible to have these extraordinary blind spots at the heart of the antiracist movement.”We will include responses from those organisations mentioned by Miller above who replied saying that you “can’t fight one form of racism by denying or propagating another and any serious anti-racism has to include opposition to antisemitism.  “David Miller has spread vile conspiracy theories which put the wellbeing of Jewish students and the wider Jewish community at risk.”

We also will include mention of the fact that the IHRC organises the Quds Day rally, an annual anti-Israel protest in London. We will say that last November, Massoud Shadjareh, founder and chairman of the IHRC, was standing by as protesters mobbed the Israeli ambassador at the London School of Economics.The Times reported in 2019 that one of the commission’s directors, Saied Reza Ameli, is the secretary of one of Iran’s leading policymaking bodies, the Supreme Council of the Cultural Revolution, we will note.Our article is scheduled for this Saturday [January 15]. Please let me know by 3pm on Friday if you would like to respond.Yours,Tom