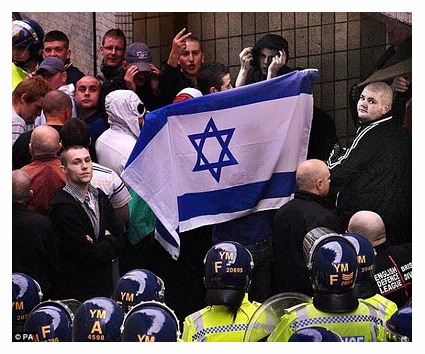 IHRC welcomes the conviction yesterday of two Zionist activists who manhandled and violently tried to shout down a pro-Palestine speaker during a demonstration in London last October.

Jonathan Hoffman and Damon Lenszner were fined after pleaded guilty to offences under the Public Order Act and also hit with restraining orders.

Disturbing videos of the pair’s behaviour has been widely circulated online and was used by the police to convict them.

After initially pleading not guilty, Lenzsner admitted to using threatening, abusive or insulting words or behaviour to cause harassment, alarm or distress. He was also given a curfew between 9pm and 6am for eight weeks and ordered to wear an electronic tag.

Hoffman was convicted of disorderly behaviour likely to cause harassment, alarm or distress, and was ordered to pay a £100 fine, £150 in court costs and a £30 victim surcharge.

As a co-organiser of the annual Al-Quds demonstration, IHRC has seen a marked spike of late in violent and disorderly behaviour associated with pro-Israel activists aiming to disrupt the event. In recent years the Zionist activists have also teamed up with members of the far right in counter demonstrations, hurling racist and Islamophobic abuse, intimidating, harassing and even threatening pro-Palestine protestors.

Both Hoffman and Lenzsner are regular attendees at the Zionist counter demonstrations against Al-Quds day. This year Lenzsner was restrained by police for violent behaviour while Hoffman was seen being pushed away by police for his aggressive behaviour towards pro-Palestine marchers that included women and children. Other Zionists activists like Laurent Kachauda were searched for weapons by police following threats to shoot attendees of Al-Quds day. We also saw pro-Israel activists carrying Israeli flags being physically removed by the police due to the real threat of violence, whilst members of the far right, carrying Israel flags, who joined the Zionists were seen doing sieg heil salutes (Nazi salutes) to intimidate pro-Palestine activists.

IHRC Chair, Massoud Shadjareh said: “We believe that it is high time that people who seek to physically and verbally attack pro-Palestine activists to prevent them from carrying out lawful activities should face the full force of the law. For far too long the police response has been too anaemic and it has only emboldened the culprits to escalate their aggression”.