Protest in UK over invitation to Modi

Home
IHRC in Media
Protest in UK over invitation to Modi 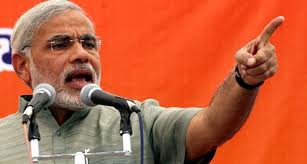 In a rare display of unity representatives of various socio-religious and human rights organisations picketed today outside Brent Civic Centre in London against the invitation sent to the Gujarat chief minister Narendra Modi by a group of British MPs led by Barry Gardiner.

Holding placards with messages including, “We will not forget Genocide 2002” and “Killer Modi not welcome here”, protestors shouted slogans, “Barry Gardiner, Shame, Shame! Inviting Modi, Not in Our Name”, “Barry, Barry don’t lie – Modi’s Guilty of Genocide”, “Who killed Ishrat Jahan? Modi did, Modi did”, “Modi is a murderer”, “Barry Gardiner shame on you shame on you”.

A theatrical stunt was also performed about the relationship between Barry Gardiner and Narendra Modi in which two protesters dressed as Gardiner and Modi cavorted together with Modi brandishing MOUs and sheaves of dollars. They were then drenched with fake blood by the protesters.

Deluding himself that he will be able to mollify the picketers as Gardiner came outside and tried to tell them that they were protesting against an invitation that had been declined and that he was willing to listen to and be lobbied by anyone. Challenging Barry Gardiner’s lies South Asian Solidarity’s Amrit Wilson told him that he had been lying and misguiding the public. Calling his bluff Ms Wilson told him that he had refused to see someone with a Muslim name but another person with English name had no problem in getting an appointment. Ms Wilson said both gentlemen belonged to South Asia Solidarity Group.

Ms Wilson later said, “In the face of so much opposition to the invitation to Modi, Barry Gardiner has now released a statement saying that Modi is unable to come in the next few weeks. But we are continuing our campaign demanding that the invitation is officially withdrawn and not repeated. Modi has already tried to make political capital in India from this invitation, and we need to send a clear message that he is not welcome here”
Despite his bluff being called by various organisations and individuals, Gardiner continued claiming that he had received only five emails complaining about his invitation. He also distributed photocopies, with the same text that he had used to respond to CoIM, with an additional intro claiming that he was willing to talk to anyone and that he has been responding to all the emails he has been receiving.

Hearing terse arguments and seeing the angry mood of the pickets Gardiner made his way into the Town Hall while protesters shouted, “shame, shame, shame”.

Zeena later said, “We have responded to each and every lie and distortion in Barry Gardiner’s letter with proofs and documents. He has been constantly lying. He has been supporting Modi since 2002 and had welcomed him in London in 2003 when, even according to his misperceptions, misinterpretations and distortions, Modi had not been ‘exonerated’ by a court of law. He has been displaying shameful opportunism and has been using Modi’s testimonials in his election campaign to win votes.”

Read the original article published in Twocircles.net on 11 September 2013