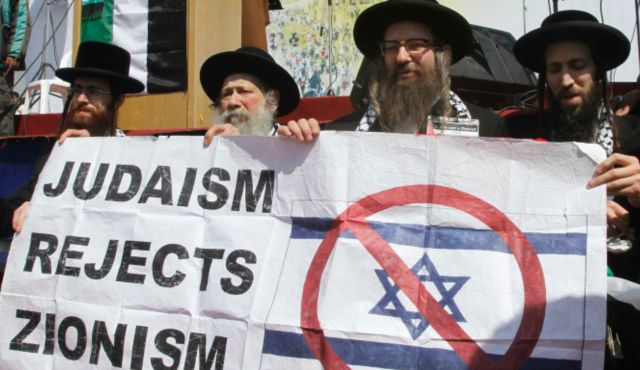 Since early in 2016, debate about rights for Palestinians has been under severe threat because criticism of Israel and of its founding ideology, Zionism, has been misrepresented as antisemitic.

Antisemitism is hatred of Jews simply because they are Jews. It must be vigorously combatted, along with all forms of bigotry. Confusing it with opposition to the state of Israel or Zionism is to obscure the real meaning of the term antisemitism and make fighting against it more difficult.

We say that behaviour is antisemitic if:

it inflicts or incites violence against Jews because they are Jews

it expresses hatred of Jews because they are Jews

it stereotypes Jews on the basis of alleged negative personal characteristics such as being mean, sly and avaricious

it employs conspiracy theories to link Jews to world domination of media, financial or governmental institutions

it accuses all Jews of embracing a single ideology, whether communism, capitalism, Zionism or any other

it suggests Jews were responsible for, or fabricated, the Holocaust.

Zionism is the political ideology which underpins the Israeli state: it is not Judaism

A recent survey of Jewish opinion (City University/Yachad 2015) found over 40 percent of British Jews did not identify as Zionist. Zionism is not an essential part of Jewish identity. It is a political ideology which can be debated like any other. Opposing it is not antisemitic.

However in December 2016, a so-called “new definition” of antisemitism was adopted by the Conservative government. It is being widely promoted by “We Believe in Israel” and similar propagandist groups, to local government, universities and other institutions. It threatens to convert legitimate political debate into a taboo.

The document being circulated begins with an innocuous-seeming definition which contributes nothing useful to the understanding of antisemitism. It says: “Antisemitism is a certain perception of Jews, which may be expressed as hatred toward Jews. Rhetorical and physical manifestations of antisemitism are directed toward Jewish or non-Jewish individuals and/or their property, toward Jewish community institutions and religious facilities.”

It is followed by 11 examples of behaviours that it calls antisemitic, seven of them referring not to Jews, but to the state of Israel. We examine some of them below.

A Home Affairs Committee report in October 2016, while winning praise from proIsrael lobbyists for promoting the definition previously adopted by a nongovernment body, the IHRA, nonetheless made sure to issue caveats about using these examples. The Committee stated (Defining Antisemitism, paragraph 24) that it was not antisemitic to criticise the Government of Israel, or to hold the Israeli Government to the same standards as other liberal democracies, or to take a particular interest in the Israeli Government’s policies or actions, “without additional evidence to suggest antisemitic intent.”

Such reservations are absent from the version adopted by the UK government and circulated to local councils by pro-Israel propagandists early in 2017. A motion voted through by the London Assembly in February stated bluntly that the examples given were “manifestations of anti-Semitism”.

In the following sections of this leaflet we discuss some of the most problematic examples of behaviour described in the definition.

1. Denying the Jewish people their right to self-determination, e.g. by claiming that the existence of a State of Israel is a racist endeavour.

There is no clear link between the two parts of this sentence.

Jewish people exercise their right to self-determination in many different ways, in a multitude of countries, generally with little restraint. Most Jews in the world already have one homeland and don’t see the need for another. Is it antisemitic if you don’t tie Jewish self-determination to Israel? Are the over forty percent of British Jews who don’t see themselves as Zionist antisemites?

You don’t have to believe that those who founded Israel were inspired by racism to recognise that racism has been an indisputable outcome of its creation, given the expulsion of around 750,000 Palestinians who were not allowed to return, and much institutionalised discrimination against those who remain

It’s not antisemitic to recognise that international law sees Israel as in “belligerent occupation” of all Palestinian territory occupied in 1967 including all of East Jerusalem, sees all settlements as illegal, and all Palestinians under occupation as severely discriminated against. Read more on Open Democracy: ‘The UK government’s new ‘anti-semitism’ definition conflates racism with valid criticism of Israel’

2. Applying double standards by requiring of it [Israel] a behaviour not expected or demanded of any other democratic nation.

The unstated assumption in this statement is that Israel is a normal democracy, just like any other. Is it antisemitic to question this? Especially when there is extensive evidence of discrimination against Palestinian citizens of Israel who are notionally full and equal citizens? And of course there are around four million Palestinians whose fate is determined by Israeli control and occupation who have no vote at all – hardly normal in a democracy.

In practice, Israel’s defenders complain of Israel being expected to abide by internationally accepted norms. Israel is in fact exceptionally favoured on the international scene by being granted unprecedented impunity for breaches of international law and human rights conventions without sanction. It is not antisemitic to call Israel to account for those breaches.

3. Drawing comparisons of contemporary Israeli policy to that of the Nazis. Comparison with the Nazis can be particularly hurtful and should not be bandied about, even though right-wing Israeli politicians regularly deploy it to abuse opponents. The system of industrialised production-line murder that Nazism instituted in its extermination camps has had no parallels elsewhere.

However, you cannot a priori rule out the possibility that there are valid comparisons to be made between some aspects of what happened under the Nazi regime, particularly before Kristallnacht, and some events that take place in Israel (or any other country). The study of history and politics requires us to make comparisons between different societies in different times. Nazi Germany has become the benchmark for a particularly horrifying form of racist totalitarianism. Sometimes people, including Jewish Israelis, appalled at Israel’s behaviour towards Palestinians, reach for the worst comparison they can muster and draw Nazi parallels. It can be hurtful and frequently short-circuits necessary critical reflection. But it is generally not made with antisemitic intent.

4. Holding Jews collectively responsible for actions of the State of Israel

We agree that it is bigoted to hold Jews – or any ethnic or religious group – collectively responsible for anything. To identify all Jews with Israel is stereotyping, and therefore antisemitic.

But ironically, it is the Jewish establishment itself, in Britain and elsewhere, that expends huge amounts of energy claiming that Israel is central to the identity of every Jew. Its leading bodies and publications insist that Jewish communities are monolithic in their support for Israel in its wars on Gaza, for example – despite clear evidence of dissent and disagreement from many tens of thousands of Jews around the world.

In this situation, non-Jews can hardly be blamed for gaining the impression that Jews and Israel are indivisible. This confusion may result in unintentional antisemitic statements. Rather than attacking people misled by the rhetoric of Jewish community leaders, those organisations would do better to explain about non-Zionist Jewish traditions and make clear that not all Jews are Zionists, and not all Zionists are Jews.

Supporters of a definition of antisemitism which deliberately equates it with opposition to Zionism have already succeeded in chilling political debate, as people move to avoid what they see as a ‘difficult’ topic. Institutions that traditionally host discussions, such as universities, church halls and other public meeting places, are cancelling events because they are frightened that some transgression might take place. It is simply easier not to talk about Palestine. This situation is likely to get worse if the flawed “new definition” is not resisted.