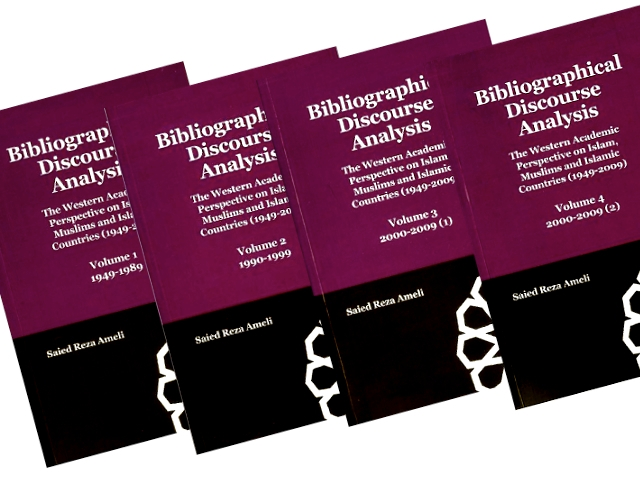 “The superbly researched work of Saeid Ameli is… particularly welcome at the present juncture. It is far more than a critical and statistical bibliography of publications and theses dealing with Islam and the Islamic world that have appeared between 1949 and 2009… All in all, an extremely useful and informative book, for which Ameli and his collaborators deserve our thanks.” – Hamid Algar, Professor Emeritus, University of California, Berkeley

Saied Reza Ameli’s work Bibliographical Discourse Analysis: The Western Academic Perspective on Islam, Muslims and Islamic Countries (1949 – 2009) is a ground breaking critical analysis of Occidental Academic preoccupation with Islam and Muslims. These four volumes cover both the changes in interest within academia in what is being studied, to the change in view of Islam and Muslims as the subject of study.

The work looks at articles, books, PhD and masters theses and dissertations that have been published over the past 60 years and that focus typically on the study of Islam or Muslims either globally or in a certain locality. As Ameli says, the study of Islam-West relations is of paramount importance for our understanding of the current status quo. The 21st century has seen an unprecedented rise in Western academic works on Muslims and Islam; highlighting a critical point in time that demands inspection. ‘Bibliographical Discourse Analysis’ reveals that 13.4% of works that were analysed bear the label of “Islamophobia”. His commanding analysis of such a vast period of history is as astute as it is detailed. His methodology, the changing trends and differing perspectives are all revealed within.

ISLAMOPHOBIA: ROOTS, DISCOURSES AND COUNTER-NARRATIVES FROM A DECOLONIAL PERSPECTIVE