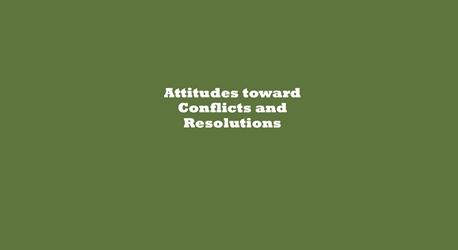 The report features an analysis of responses gathered from 18 participants at the Muslim World Priority Meeting on Conflict Resolution. It took place from 25-29 October in Bodrum. As the number of the respondents are few, the results should not be generalised. Therefore, the present analysis is just an examination and comparison of the responses as well as an examination of its statistical average. It begins by exploring definitions of the terms ‘conflict’ and ‘conflict resolution’ and is particularly interested in representing conflict through models; pointing in particular to the scholar Johan Galtung’s model where conflict is located within a framework that encompasses different levels from international down to societal (identity groups or individuals). It is constructive to be able to see the triggers and transformers of conflict operating at the same time across an array of different spheres.

Conflict resolution processes are then explored. Conflict can end through violence and warfare or can be managed through compromise and the assistance of a third party; the processes are many and varied. Religion has oft been viewed as one of the most significant causes of conflict and war across the world. This is despite the fact that the value of peace is emphasised in all religions. Yet this specific view ignores the rise of religious nationalisms – when religion becomes an expression of nation as opposed to an expression of conscience. The report expresses that notions of historicity and race operate under the guise of religion.

The report measures the intensity of participants’ opinions on a number of propositions. The proposition that participants (41.1% of them) were least enthused by was the claim that “we should disregard differences of opinion.” On the other hand 87.5% of the participants agreed that “conflict-resolution skills can help achieve a win-win solution that recognises the needs and interests of all parties, where no one has to stand out as the ‘tough guy.'” The extent of agreement, abstention and disagreement in regards to several propositions was then respectively measured. Of propositions where there was total agreement among participants, the one most fervently agreed to was: “Though conflict resolution takes time, it may take much more time if the situation is allowed to continue without being addressed.” Participants chose to abstain from only four of the propositions put to them but even then the number of abstentions was not more than 10% in any of the cases. Further examination of the participants’ attitudes also proved that propositions with negative implications embedded in their meaning will incite generally negative feelings.

Concluding with an analysis of the correlation between people’s views, the report also reveals that almost all participants who agreed that “individual and group conflicts affect social and ummah conflicts” also agreed that “conflict resolution is about understanding and coming to agreement.”